Books in Bites 13: Three Comics Worth Your Attention 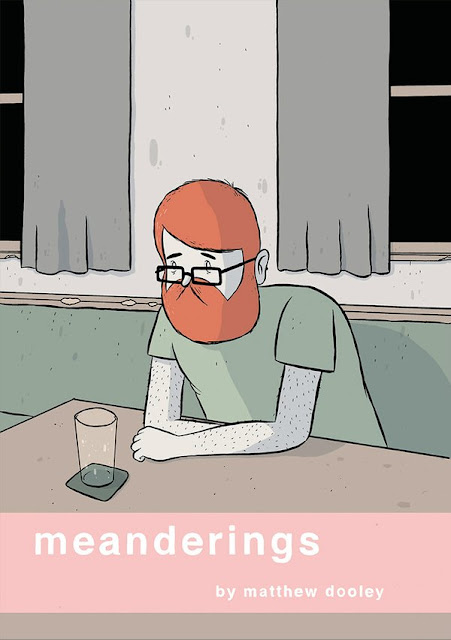 So much of Matthew Dooley’s Meanderings, a compilation of his short comics published by Throwaway Press, is about the frustration and poignancy inherent in the failure of expectations. There’s an underlying sadness to his humorous vignettes that cuts to the quick even as we snicker at the joke. It’s not so much schadenfreude that you experience while reading this book, so much as it is the smile of recognition, the warm pat on the back in the company of failure.

The first story in the compilation sets the tone. A group of outcasts gathers together under the banner of The Intergalactic Alliance for Peace and Unity, and their leader, Mike, has predicted the end of the world. When the appointed time of armageddon comes and goes, the group packs up their picnic and justifies the event, spinning a positive out of disappointment. The final punch line in the last panel certainly adds levity to the tone, but it also reveals the senselessness of expectations as well. 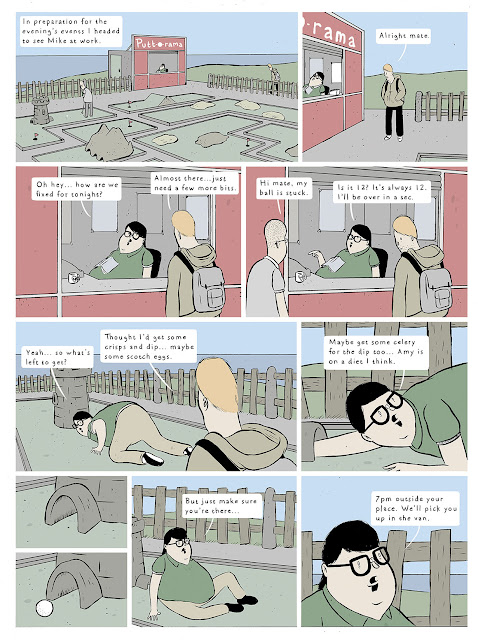 Even inanimate objects serve to further Dooley’s sensibilities. Public art pieces, statues of politicians, even a park bench are all endowed with the inevitable disappointment between intent and time. Time carries on, and with it, so too does the world. What was important 10 years ago now is forgotten or reframed. The disillusion can be seen as absurd as it is tragic. 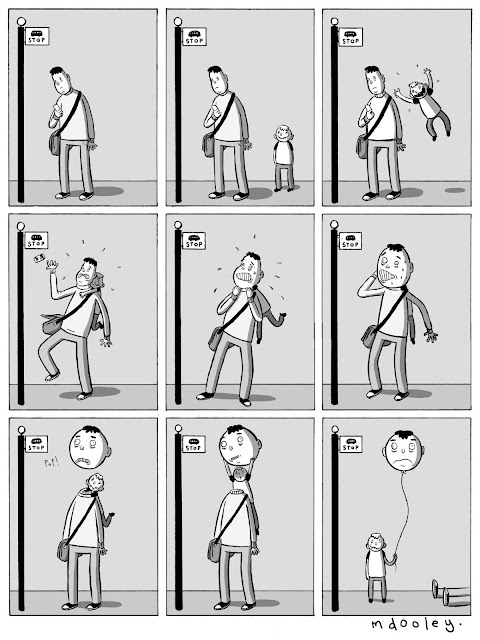 Meanderings is, first and foremost, full of laughs. Dooley clearly understands the concept of pacing as it works in the medium and uses it deftly to punctuate his jokes. The laughter he induces, though, comes from the recognition that this, too, is us, trapped as we are in the preposterous game that we play. 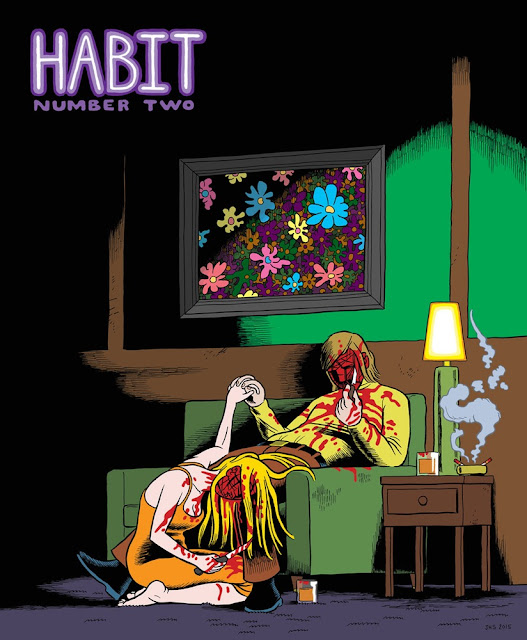 Coming on the heels of Habit #1, Josh Simmons is back tearing up the place, this time bringing along artists Tom Van Deusen, Eric Reynolds, and Ben Horak along with him on this wild ride.

Habit #2 continues to confound. Its 52, black and white, saddle-stitched pages contain four comics of escalating bonkers, ending in a literal shit storm. It all begins with Simmons’ own “The Incident at Owl’s Head,” which starts off as a drifter coming to a new town and ends as a horrific, surreal morality tale about trust and kindness. There is one scene in particular, during breakfast, that defies all sense and sets such a nightmarish tone that the reader must disassociate from their reality making mechanisms in order to continue through. It’s these sorts of moments that Simmons does best, placing ordinary people in extraordinary circumstances and marking them unfazed by the event. In Simmons work, the world is dangerous and weird and we should fucking wake up and realize that already. 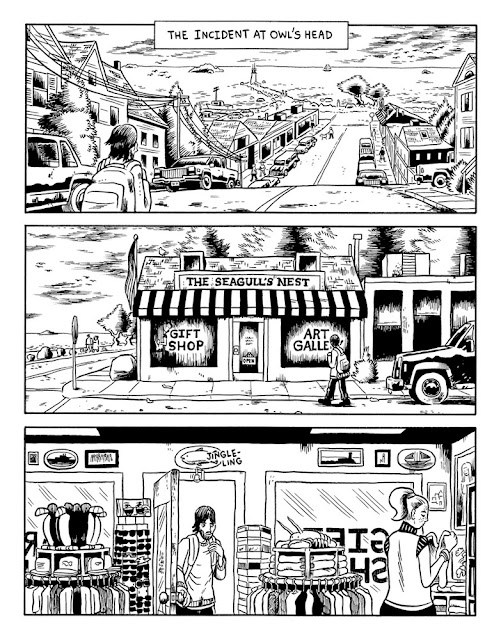 “Late For The Show” features Tom Van Dusen’s story and pencils, with Simmons on layout and inks. This short tale is bookended in reality (sort of), but its middle spurns what we know of the world and plays commentary as much as it plays the prancing surrealist. It’s meaty in the true sense of the word, and is, of course, bonkers. 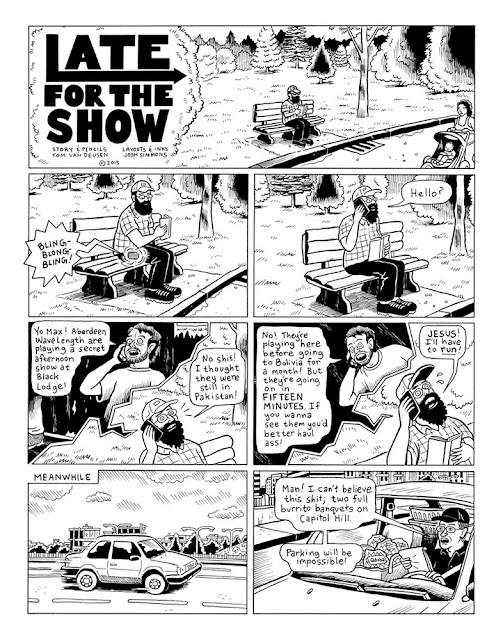 “Bertram” is all Simmons again with Eric Reynolds on inks. It’s about a big dog. Or a dysfunctional family. Or zombies. Or… fuck, I don’t even know. It’s wonderfully wack-a-doo and couldn’t ever exist in any place other than Simmons’ fertile mind.

The last story features Simmons on story and Ben Horak on art. It’s called “The Great Shitter” and while its name gives away pretty much the premise of the piece, you just need to read it yourself. It’s fetid and frightening and full of pathos and serves as the perfect ending to this collection.

Habit #2 isn’t for the comfortable or the staid, but it just might be for you. 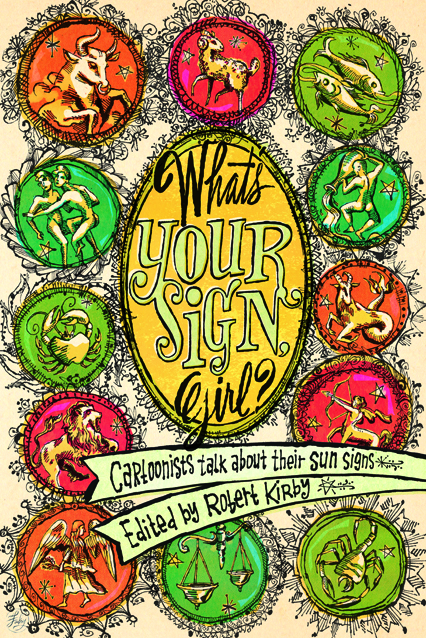 Astrology can be damn complicated. First, you gotta know your zodiac sign (or is called “Sun Sign”), then there’s your elements and your qualities and when your moon’s rising in which house. I mean, just take a look at this chart I just did on myself over at Astrolabe. It’s intimidating and confusing and, in a way, kinda deeming to think that everyone born on the same day and time and place as I all would get the same chart. Kinda kicks you in the teeth of feeling unique?

Luckily, there’s What’s Your Sign, Girl, edited by Robert Kirby and published by Ninth Art Press. Here, Kirby and a constellation of contributors break down their signs for easy digestion, as well as provide intricate and varied responses to each of their relationships to the generalities of the specific sun sign, as well as, often, to the concept of astrology itself. 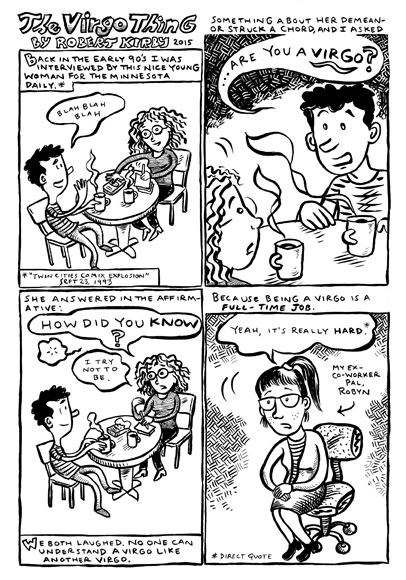 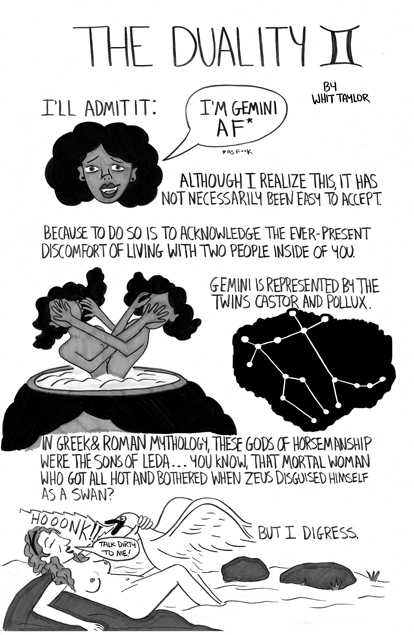 It's revelatory, not only in terms of the information but also about the nature of the cartoonists themselves. Each one of these artists takes the gestalt of their sign and personalizes it to become idea in action. It humanizes the general, making it real, understandable -- all in the answer to the question of the ramifications of the hold astrology still has on so many of our lives. This is ultimately a quest for meaning, for understanding, for how larger forces may, in some way, help us understand ourselves. While What’s Your Sign, Girl is ostensibly about astrology, it is really about larger questions such as how patterns dictate personality, how expectations inform reality, and how, as social beings, we operate within the contextual frame.

And incidentally, Rob Kirby, I’m a Virgo too. You get me.