Kilgore Books has released its Spring 2016 lineup, consisting of a diverse slate of four comics that run the gamut between thoughtful meditation, political satire, knife-sharp humor, and complete bonkers. Though arising out of a single publishing house, these releases show the variety of the possibilities inherent in the medium and further cements Kilgore’s place in the pantheon of small press publishers to follow.

The following are some quick reviews of these new books. 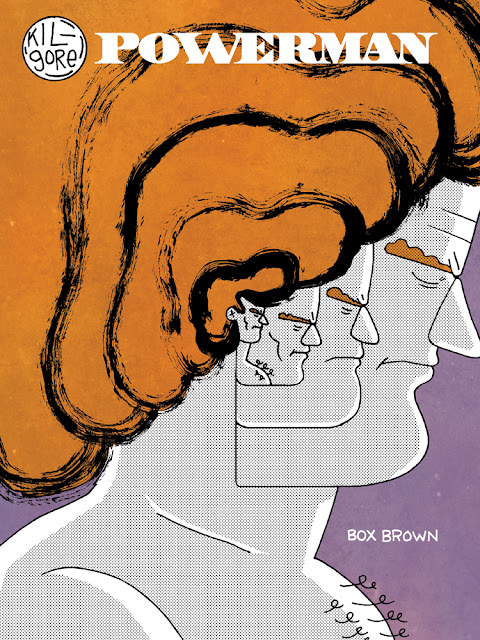 Such is the dawn of the age of Trump. Politics of late has become the ultimate ego game in which the face of America has grown orange and hard. The front runner projects a vaguely visceral viciousness tied up in monosyllabic sound-bites and pat assurances signifying nothing. The brand is tied to the man, but, given that the man wears many faces, we can only presume what that entails. So we suppose and given our propensity for predilections, the vacuous brand-man mirrors that which we want to see.

In Powerman, cartoonist Box Brown peels back the rind and tries to figure out what has brought us to this moment, this man, this face. Brown’s subject here is a Trump stand-in named Gary Beesh. Beesh, completely self-deluded and pompous, starts off much as you would expect. The scion of a vast fortune, he operates in a world of his own making, disdainful of anyone’s criticism of him and assured of his acumen regardless of the reality of his own failures. 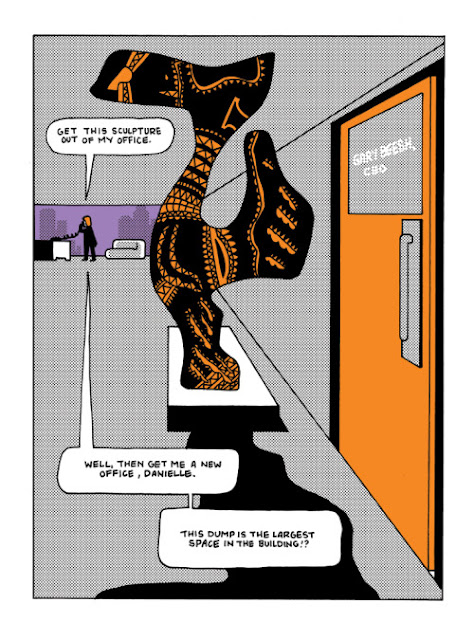 But Brown is not content with just satirically tearing into his creation in order to further a political point, rather he delves deeper, trying to understand, and then projecting some sort of salvation, perhaps, or mitigation. Beesh stands at the precipice, but it only exists as a stepping stone. It is at his end that others reflect on his journey. There, in the last few pages of Powerman, Brown hints at the inner life of this creation. Here, there is crudely drawn sympathy, as if that which was so plastic had, in the end, become flesh. No excuses. 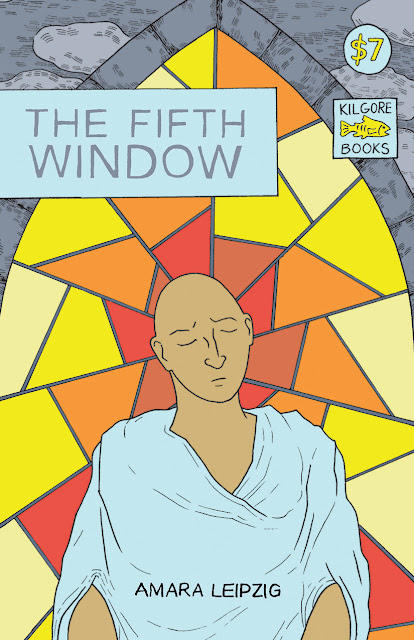 Amara Leipzig’s The Fifth Window reads like a Zen koan meditating on the nature of time and perception and the procreant urge of creativity and survival. Its premise concerns a solitary monk who fills the windows of a tower on an abandoned island with stained glass images capturing visions of the world outside. The fifth window looms unfinished; the monk is blocked from the muse that has heretofore been the spark of creativity.

In Leipzig’s pages, backgrounds are saturated with screentones, negative space, crosshatch, or thick ink, bringing the emotional weight of the moments to the fore. In construction, narrative becomes an exercise in unpacking or puzzle piecing. Process is intent and the reader feels almost like a dinghy adrift in a larger sea. All of which adds to the experience of connecting to Leipzig’s aim. 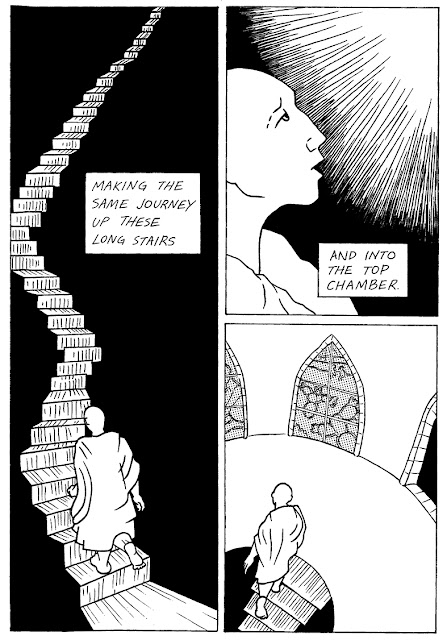 And yet there is a softness to this book, marking it as an encounter with the method of creating meaning, of the artistic impulse itself. There is within and without, as if the visions themselves are channeled through the reader simultaneously and the hard line between perception and formation bends or embraces. By the last page of The Fifth Window there is resolution that ends at the beginning, and, much like the monk, the reader creates their own insight into what the window becomes. 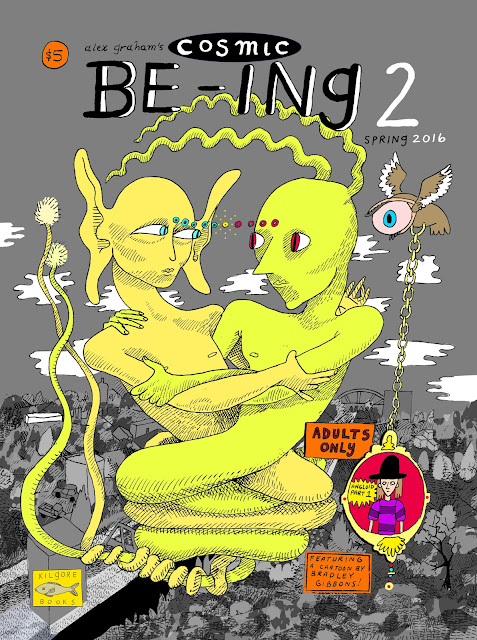 Kilgore Books describes Cosmic Be-ing #2 as “a metaphysical journey on the merits of life. Beautiful, tender, and weird.” This collection of vignette comics highlights the sensibilities and understandings of its creator, Denver-based cartoonist Alex Graham.

The bulk of this book is the strangely fluid story “Angloid Part 1”. The titular character, Angloid, is a gender ambiguous “feral freak in Denver,” a city Graham calls the “dullest of cities…” who is a self-loathing artist visited by an alien. As dark and despairing as this story gets at times, there is a whimsy and lightness that, in a totally bonkers way, makes the repellent attractive as it cries incredulously that “pain is the source of everything beautiful.” Graham is universally affirming in the midst of tearing apart her constructs. 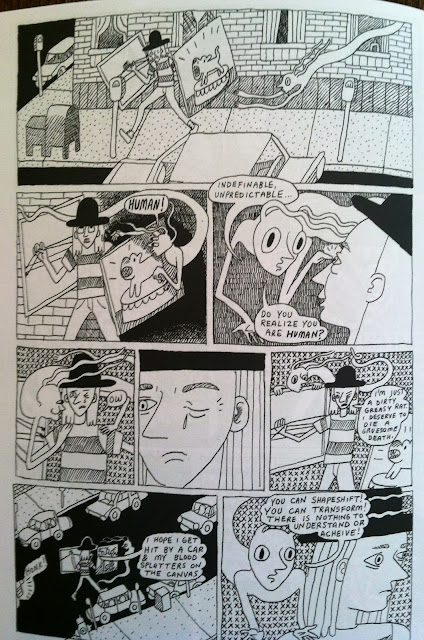 Peppered throughout the rest of Cosmic Be-ing #2 are vignettes of small cruelties, isolation, the sacrifices we make to connect, the destructive power of contempt for the self, and the creative power of acceptance. As a whole, the book itself operates almost as a polemic on the hegemony of the inner voice and how we all function as the artist in the creation of the self.

Although unsparing in its tussle with the concepts of identity, it’s hard not to feel comforted by Graham’s work here. It is the acknowledgment that you’re not alone in your daily struggles and that even in the depths of your layers, hope still exists.

A HORSE, A CROW, AND A HIPPO WALK INTO A BAR
By Lauren Barnett
72 pages, black and white, perfect bound
Available here 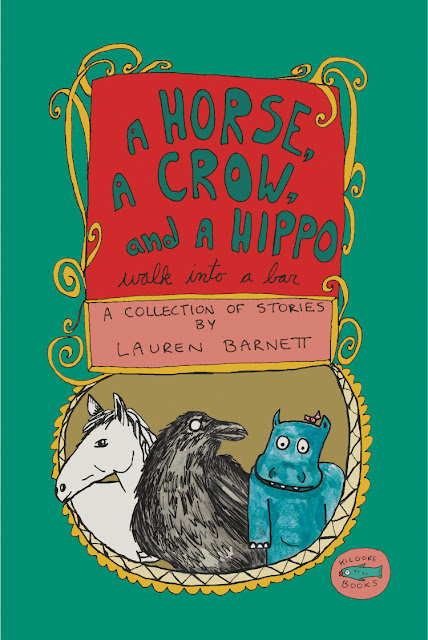 Okay. Lauren Barnett’s A Horse, a Crow, and a Hippo Walk into a Bar is bonkers. Obdurately and mulishly smug in her portrayal of diatribe-hurling anthropomorphic animal assholes, Barnett upends expectations like a battered and fetid drunkard careening into a carefully set, white cloth dining table in a five-star restaurant run by celebrity chefs.

I don’t know if I would call this a comic, though it is words and pictures working together. Barnett works in single images, one per page, as she unfolds her animal's self-absorption. Each one of these creatures, the horse, the crow, and the hippo named Nimples, knows that they are better than you and have no compulsion to adhere to the niceties of social intercourse.


We constantly are telling each other to be proud of who we are. We always say we want to know what the others around us are really thinking.

More often than not, they think we’re “dickfucks”. 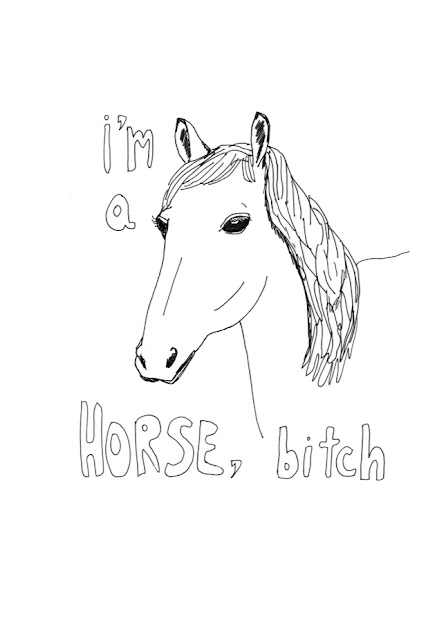 It’s unavoidable. The age of personal empowerment leads to insufferable assholes. Barnett puts this fact on full display, yet couches this message in totemic representations from the animal kingdom allowing for the distance necessary to laugh instead of cry. It’s a funny bit of business, that’s for sure, and I’d be laughing all that much harder if I wasn’t so depressed by the truth of the matter.