Review of THE MOON MOTH 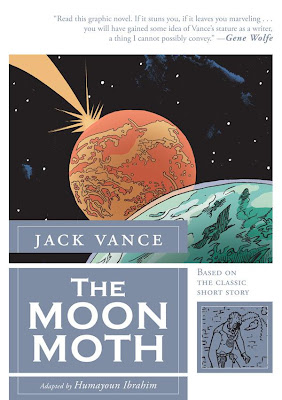 This Review orginally ran on Comics Bulletin
For genre fiction enthusiasts , especially those fond of Science-Fiction and Fantasy, the name Jack Vance resonates as one of the unsung geniuses of the craft. In his life time he won Hugo, Nebula and World Fantasy awards and was named Grand Master by the Science fiction and Fantasy Writers of America.

He even received an Edgar from the Mystery Writers of America. Still his name barely raises an eyebrow of recognition in the larger public consciousness, unlike, say, Ray Bradbury or Philip K. Dick. Hopefully, with First Second's publication of the graphic novel The Moon Moth, which is based on Vance's short story of the same name and adapted by Humayoun Ibrahim, this preterition will finally come to an end.


In the forward to the book by Carlo Rotella (the director of American Studies at Boston College), Rotella writes that Vance, in his fiction,

artfully recombines recurring elements: the rhythms of travel; the pleasures of music, strong drink and vengeance; touchy encounters with pedants, mountebanks, violently opinionated aesthetes and zealots, louts, bigots of all stripes and boyishly slim young women with an enigmatic habit of looking back over their shoulders. His stories sustain an anecdotal forward drive that balances his digressive pleasure in imagining a world and the hypnotic effect of his distinctive tone, which has been variously described as barbed, velvety, arch and mandarin... Reading Vance leaves you with a sense of formality, of having been present at an occasion when, for all the jokiness and the fun of made-up words, the serious business of literary entertainment was transacted.

This recitation perfectly sums up what goes on in The Moon Moth. This is a complex tale of identity, social customs, and communication wrapped up in a murder mystery using the cover of “high-concept science fiction”. If you have never read the story, it is brilliant – literary and accessible, engaging and thought-provoking. Ibrahim's adaptation stays blessedly true to all these aspects of the story. 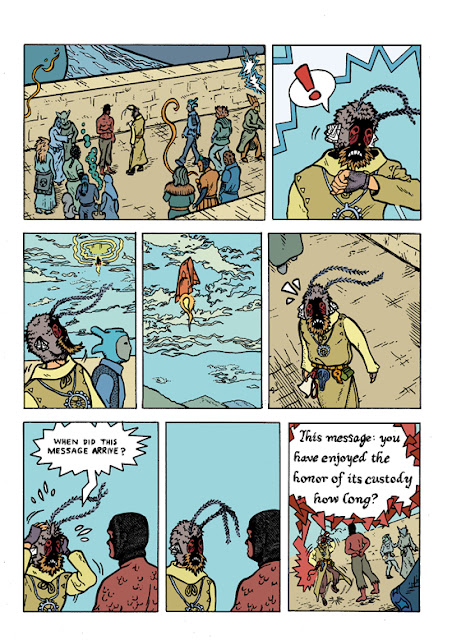 By presenting it as a graphic novel, though, Ibrahim adds another layer of complexity to the tale. In a visual medium, much of Vance's descriptive passages are rendered redundant, as the art is used to convey the scenes and personalities. Ibrahim does a wonderful job of this, especially given the fact that this is his first graphic novel. His clean lines, evocative color palette, and inventive styling all add to the rhythm of Vance's story and enhance the pacing of the tale. There are a few times where the choices Ibrahim makes in terms of panel layout are a little odd, but the overall effect of his art is spot on and reinforces Vance's themes. 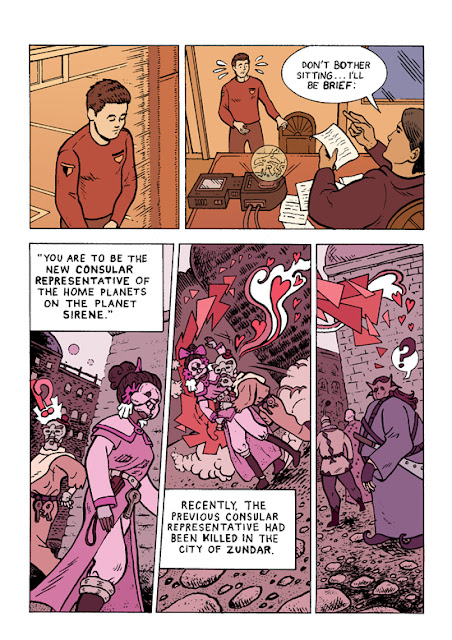 This is a wonderful story which is certainly augmented by its presentation as a graphic novel. Hopefully its publication will lead to a wider audience for Vance's writing, as well as pave the way for further adaptations of his work, both as graphic novels and even film.

To check out a preview from First Second, click here.