Cheap Thrills -- ALONG THE CANADIAN #2 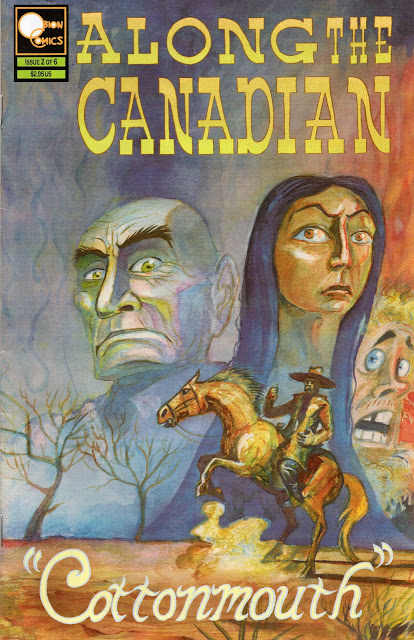 AFRAID OF SNAKES! YOU AIN'T AFRAID, ARE YA BOY?!
Sometimes it is hard to believe that May, 2004 was actually almost eight years ago. I mean, I remember it like it was yesterday. Massachusetts legalized same-sex marriage, Fahrenheit 9/11 won the Palme d'Or at the Cannes Film Festival, both Shrek 2 and Harry Potter and the Prisoner of Azkaban were packing folks in the movie theaters, and Megas XLR debuted on Cartoon Network.

Both Friends and Fraiser said goodbye in May of 2004, Phish announced that they would be breaking up at the end of the Summer, and Tony Randall died.

In May 2004, both Skinny Puppy and PJ Harvey released albums, Nintendo officially announced what would later be known as the Wii, and from Portland, Maine, Obion Comics publishes Xeric Grant Winner Joel Rivers' black and white Western tale, Along the Canadian #2.

According to their website, The Xeric Foundation is “a private, nonprofit corporation established by Peter A. Laird, co-creator of the Teenage Mutant Ninja Turtles and Planet Racers which offers financial assistance to committed, self-publishing comic book creators and qualified charitable and nonprofit organizations.” This, though, will be the last year they will be doing this. Anyway, the fine folks at the Xeric Foundation saw in Joel Rivers enough talent to award him a grant to pursue his dream of publishing his 6 issue mini-series about the Old West. Today, I found it in the bargain bin.

Issue #2 of Along the Canadian has the subtitle “Cottonmouth”. It begins like this: 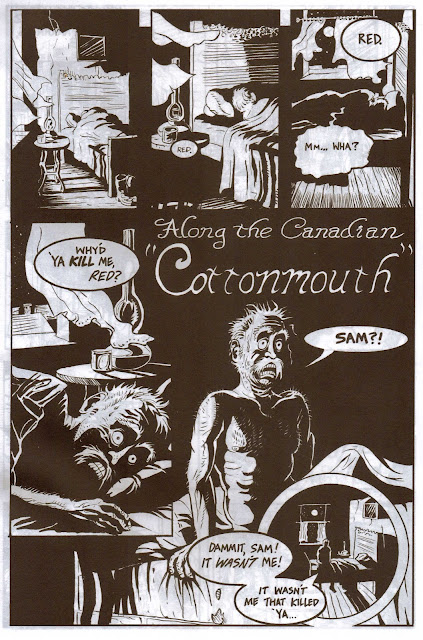 I hate when the voices in my head want to know why I killed them.

The next page takes us to Fort Smith, Arkansas in the year 1873. Our mustachioed nightmare having man turns out to be the sheriff of that them thar town, and he's lookin' fer some new deputies (willing to pay them $10 a week, too). Nobody seems to take him very seriously. I think there is a back story to this.

Luckily, to get the plot moving forward, these fine folks come riding into town. 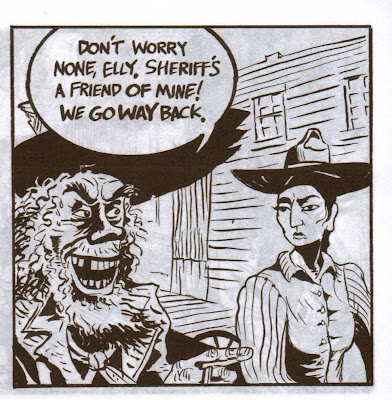 Elly and her Uncle have a bit of a problem. They've been followed into town by a no good rootin' tootin' snake oil peddler (Jones) who, much to her chagrin, is sweet on poor Elly. 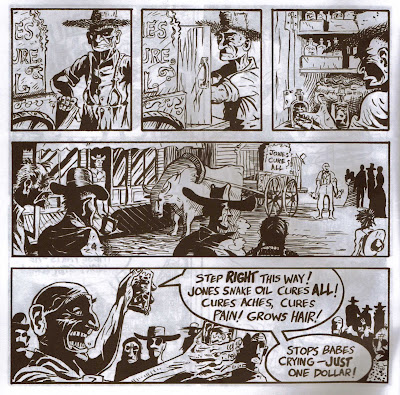 Elly's Uncle (as well as her mom) ain't keen on Jones the snake oil peddler neither. But Jones is a persistent cuss who people say is “a white witch-man from out east” who seems to have an affinity for snakes. 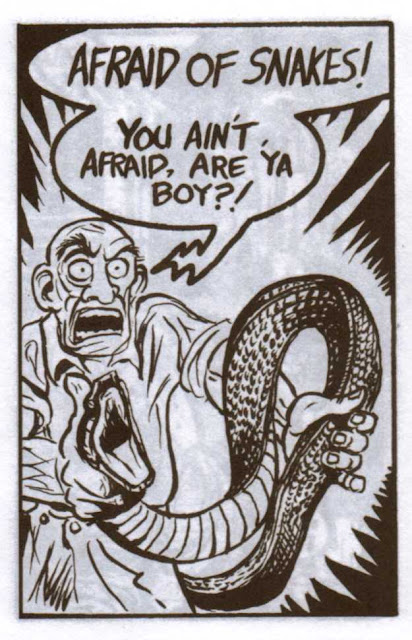 As an aside: Regardless of whatever flaws of execution that Along the Canadian #2 contains (and there are some, but not many) – I will always remember that panel above. Just so you know.

As he is friends with the Uncle and all (and, after a home cooked meal, seems to be growing sweet on Elly himself), the Sheriff agrees to go talk to Jones about his harassment. Writer/artist Joel Rivers then provides the following four panels: 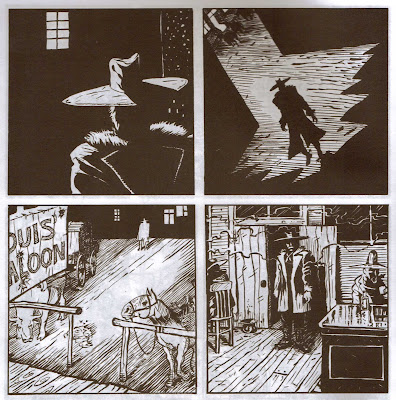 Now this is what the Xeric Foundation must have seen in Joel. The use of shadows, the pacing, the silence – this is good stuff. This is what you can do in comics.

The Sheriff sits down with Jones and they discuss his affinity for Elly. Jones pours the Sheriff a drink, which turns out to be drugged. While passed out, the Sheriff has some strange dreams involving a nun, a dead wife, and a snake (SNAKE!). The Sheriff finally comes to, but by then Jones has kicked the crap out of Uncle and taken Elly out into the Creek Nation. The Sheriff, his honor and fondness for Elly at stake, rides off into the prairie – towards Deep Fork. 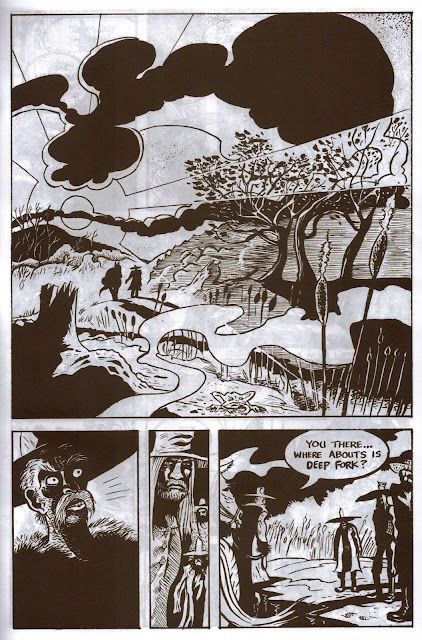 The Sheriff eventually finds Jones' cabin, and then makes a dramatic kicking the door down* kind of entrance. Gun out, he lets a rather calm Jones know his intention: 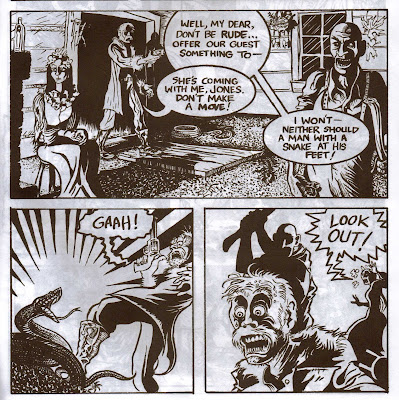 Pacing, layouts – Rivers is nailing it. And so is Jones. Nailing the Sheriff on the head with a big stick, that is.

Which leads to this bit of awesomeness: 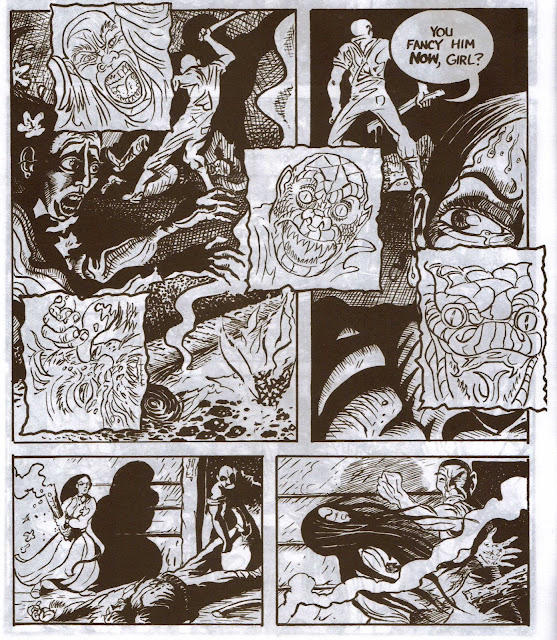 After punching Elly in the face, Jones grabs the Sheriff's unconscious body and tosses him into the swamp(?) by the cabin. 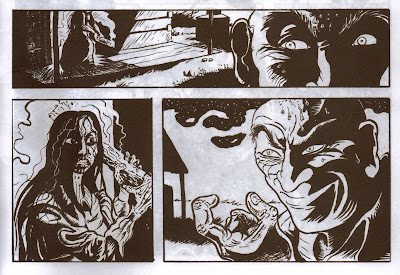 Which leads to this: 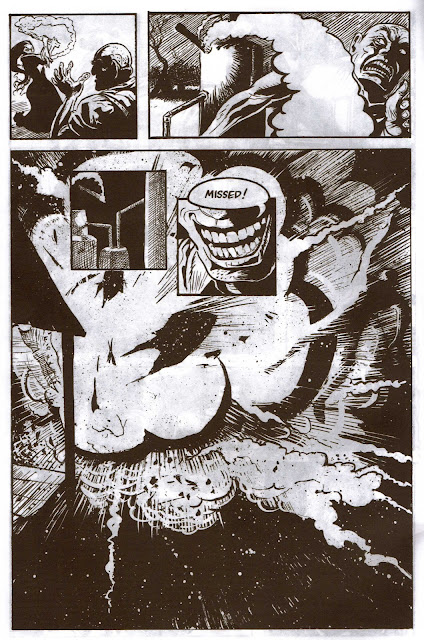 Call me a sucker or an idiot or even Your Chicken Enemy, but I think this is wonderful for all the reasons I've said before – the pacing, the layouts, the use of shadows. Sure, it's not a high-level masterpiece, but if you ask me, it is one of the great tragedies that Along the Canadian #2 has ended up in the bargain bin and not in everybody's long boxes at home.

Oh yea … wait … Rivers isn't done telling his story. Elly runs down to the water and finds the Sheriff. 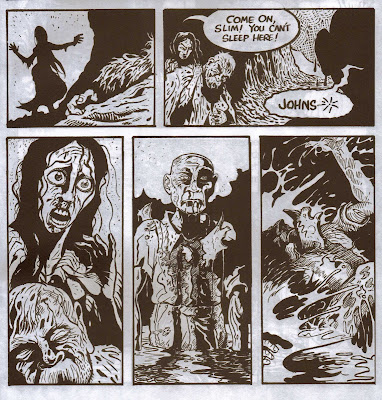 Classic. It had to be done, right? Sure the villain popping up just when you think he is defeated is not a ground breaking plot device, but somehow here it is just a little gift. It's like when they ask you if you want Jimmies on your Sundae. And who doesn't love Jimmies?

When I pulled Along the Canadian #2 out of the bargain bin and took a gander at the cover, I thought this was going to be one of those columns that I would have to slog through with the voices in my head begging me to either stop or jam an ice pick into my left eye socket.

But I was thankfully wrong. I read Along the Canadian #2 with an increasingly expanding grin on my face as I turned each page. What the hell was this little gem doing in the bargain bin? Didn't Joel Rivers win a grant from the Xeric Foundation to put this out – doesn't that come with any clout at all? Is it because he self- published it through his own Obion Comics? From Maine? Did he lack the resources to give it the big pimping and therefore it languished in sales and interest? Where was the press? All I could find was a short review in the Comics Journal that says some nice things. Doesn't the Xeric Foundation issue press releases?

The whole thing kinda makes me sad. This is a good comic, and now it is jammed in the bargain bin rubbing ink with the likes of Ogre and Satan's Six.

The good news is that Joel Rivers has collected the entire six issue series into an OGN (which you can buy here), but it's inclusion among the detritus of comic book high-hopes low-talent speaks to a wider issue that Steve Savage and I have been discussing of late here on Comics Bulletin.

Go read what we have to say about this idea. Then, for the sake of something as good as Along the Canadian, think about doing something.

* I can't write something like that without thinking of this: