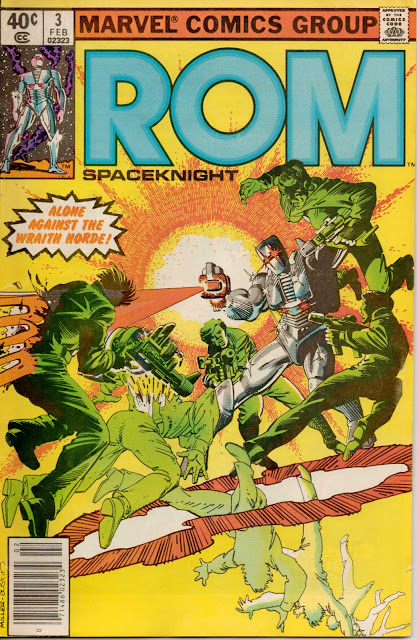 B-But … My Hands!!
February 1980 had a lot going for it. There was “The Miracle on Ice” when the US Olympic Hockey Team defeated the Soviet Union in the semifinals of the Winter Olympics. The FBI busted members of Congress during Abscam. Lou Reed married Sylvia Morales. American Gigolo and Caligula hit the big screens. Captain and Tennille wanted us to “Do That To Me One More Time” and Michael Jackson wanted to “Rock With You”

But the highlight of February 1980 had to be the release of Marvel Comics’ Rom Spaceknight #3.

Now I know what you’re thinking. Rom Spaceknight was a comic designed to market a rather shoddy plastic toy from Parker Brothers. Comics created to sell products can’t be any good, can they?

But Marvel handed this project over to Bill Mantlo, and that made all the difference. While the toy it was associated with eventually became a memory, the Rom comic lasted for 75 issues over a seven year period. Why? Because it is awesome, that’s why!

Here’s the deal: Rom has come to earth to save it from the Dire Wraiths. The Dire Wraiths are creatures of pure evil that can shape-shift a la the Skrulls. The Wraiths have been infiltrating positions of power on Earth in order to conquer it and make it their own. 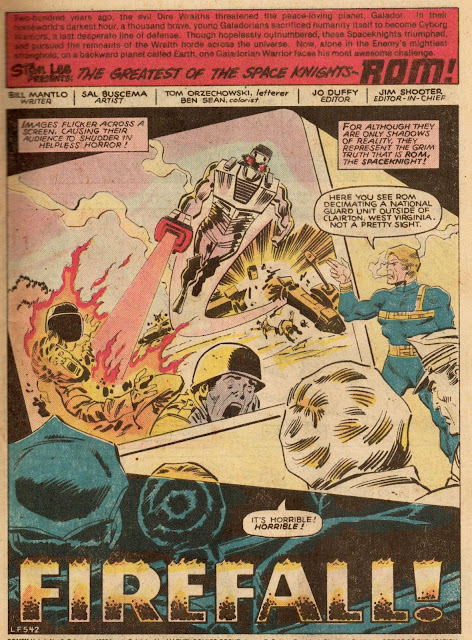 Agent Kraller and Dr. Sweet are showing Stryker, a career criminal, footage of Rom “decimating a National Guard unit outside of Clairton, West Virginia.” Stryker is horrified by what he is witnessing and Buscema renders it perfectly.

Stryker had witnessed Rom frying the police chief who had arrested him in an earlier issue and the memory of it has convinced Stryker that Rom must be stopped.

Project Safeguard, for whom Agent Kraller works, has the answer for Stryker. They can help him stop Rom. 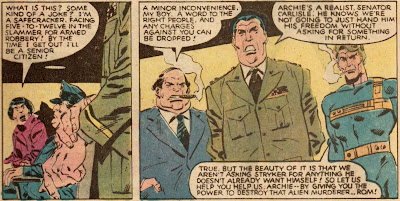 All it will take is Stryker’s say so and “A word to the right people.”

The comic then cuts to the title character as Rom stands alone on a West Virginia hilltop ruminating about his present situation and his past.

He thinks about the first human he encountered, Brandy Clark, who seems to be a potential female foil/love interest for our silver clad knight. And, of course, Buscema makes her hot.

The reader gets a chance to relive Rom’s origin during this late night musing. Rom is from the planet Galador. He volunteered for the army to fight the Dire Wraiths and, as part of the deal, was grafted to his Space Knight armor. Ouch! 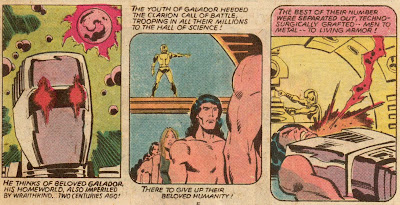 Under Mantlo and Buscema’s steerage, this sort of hokey origin story takes on some real Silver Surfer like pathos: 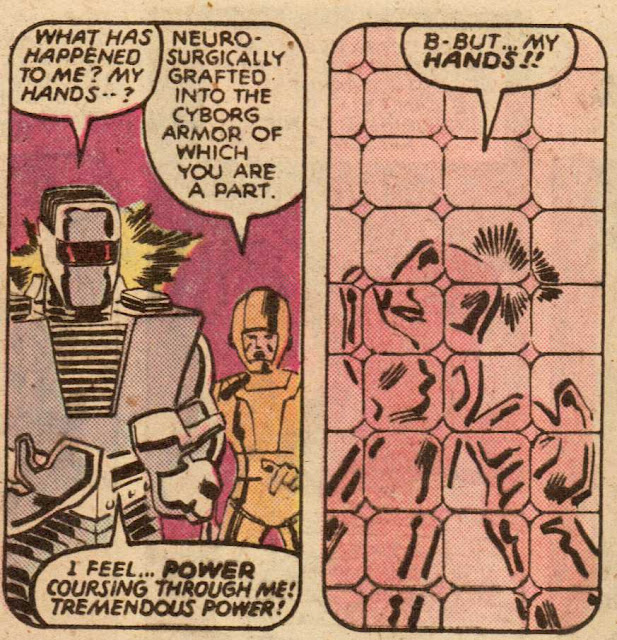 This scene, where Rom looks at his encased hands through his cyborg eyes, gives the character depth, feelings, and makes him much more than just a marketing vehicle. This is a character that has made enormous sacrifices for his kind and for the universe as a whole. He has given up his ability to ever have real contact with another person ever again. His hands are no longer his own.

Rom snaps out of his reverie and “summons his energy analyzer from subspace.” Using it, he finds a concentration of Dire Wraiths “on a massive scale” in the distance and flies off to deal with their threat.

As he does this, the narrative shifts focus to Brandy Clark. She is thinking about Rom.

There’s a lot of subtext here. There are also a lot of places the story can go from here.

Brandy goes back to her apartment. There she finds it has been ransacked and there are two gentlemen with badges who want her to come with them to answer some questions about Rom. This is the last we see of Brandy in this issue.

Next, the comic goes back to Stryker as he runs through some sort of seriously deadly obstacle course. Using his innate physical gifts as well as his intelligence, Stryker is able to make it though the course. By doing so, he proves to Agent Kraller and Dr. Sweet that he is physically and mentally prepared to take his vendetta against Rom to the next level.

Agent Kraller and Dr. Sweet take Stryker to “Safeguard’s top-secret training camp: The Farm” where he is given the secret weapon. 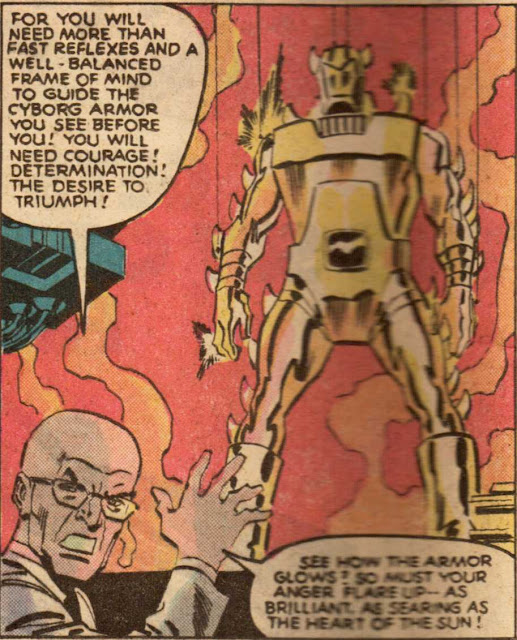 I have no idea who this bald, science guy is, but he sure lays it on pretty thick. He must have minored in Literature in college.

So Stryker gets a super suit to fight Rom.

Speaking of Rom, he’s on his way to deal with some serious “Wraith Evil!” Flying down what appears to be an abandoned mine shaft or something, Rom comes upon a subterranean cavern filled with those evil bastards. They are all in human shape, so Rom bathes them in his Energy Analyzer and reveals their true form. 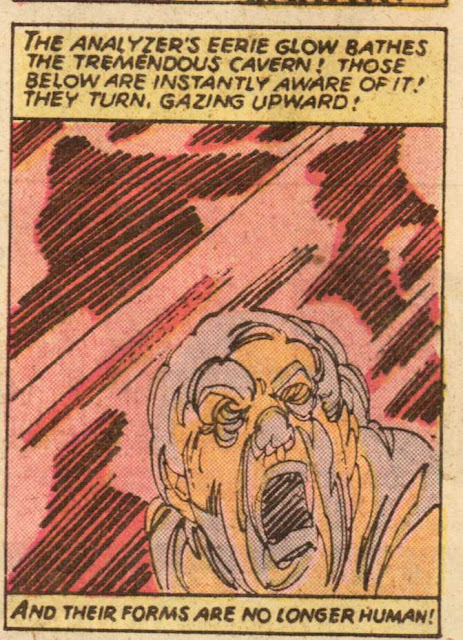 Damn, these things are creepy. Buscema has done a fantastic job of getting some serious creepy out of these things. I mean, what the hell are they?

Anyway, Rom does what Rom does and starts blasting. Whipping out his Neutralizer, he sends these creatures to Limbo. 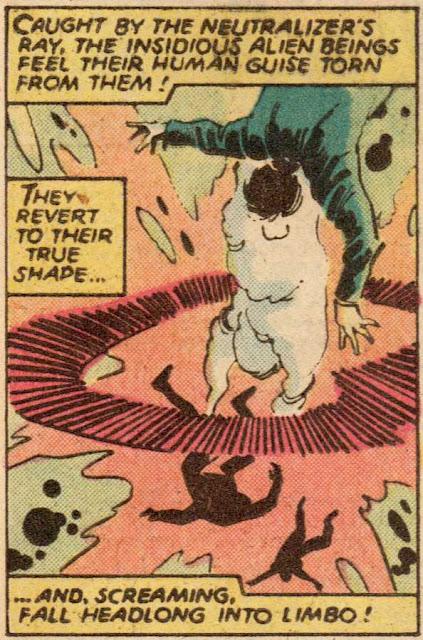 Once again, Buscema and Mantlo nail this. The artwork and the inclusion of the parenthetical “screaming” add all sorts of visceral drama to this act. I’m a little confused by the fact that the Wraiths “revert to their true shape” as they are sent through that energy hole, but seem to regain their human aspect as they fall into Limbo. But this confusion is only minor compared with the enormity of the panel itself.

Next, one of the Wraiths, narrating the futility of the action, tries to run over Rom with a jeep. Rom then shows how much power he possesses. 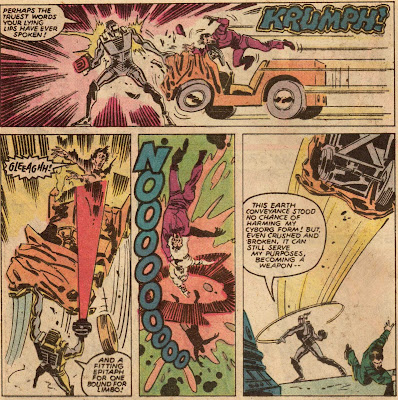 The hurled jeep smashes the giant “Transporter” that the Wraiths had been building to save their brethren from Limbo. The demolition of this device sends an “unearthly energy” into the atmosphere where it becomes focused on a local power transmission tower.

This causes all sorts of energy spikes throughout West Virginia, causing all devices that use electricity to “ZIZZ” and “ZRAK”.

While the electrical surges are occurring, the comic turns its focus to Steve Jackson, Brandy Clark’s boyfriend. Steve is looking for Brandy. Brandy’s parents tell him that she has gone back to her apartment. 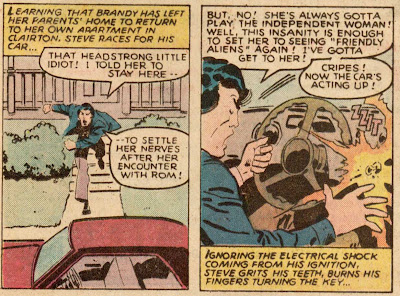 Aside from the fact that the car is not attached to anything that the transmission tower should influence, and Steve’s “even for the 80’s” misogyny, we get ourselves a good sub-plot going here.

Steve gets to Brandy’s apartment to find it trashed and Brandy gone.

Back to the battle with the Dire Wraith’s now. As Rom is frying the crap out of the Wraiths, Stryker in his battle suit makes the scene. 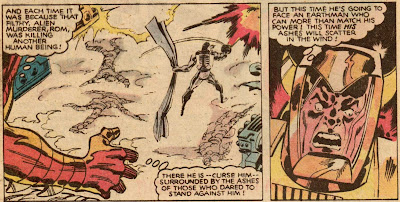 Man, he looks pissed! I love how Buscema draws Stryker’s face behind the visor of the armor! You also have to love the bodies made of ash surrounding Rom. Bravo, Buscema, bravo!

Stryker then attacks Rom with his armor’s weaponry. 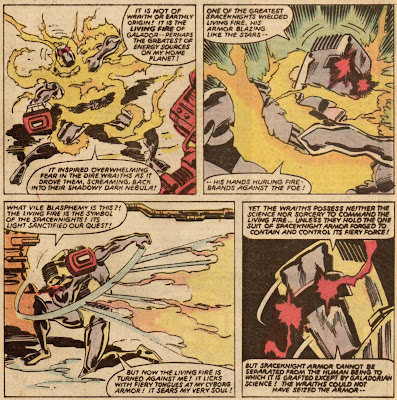 Rom recognizes the flame engulfing him as “The Living Fire of Galador” and waxes poetically about how it was the symbol of the Spaceknights, “It’s light sanctified our quest!” He also knows that The Living Fire was only wielded by a Spaceknight “forged to contain and control its fiery force.” This Space Knight was Rom’s friend Karas. 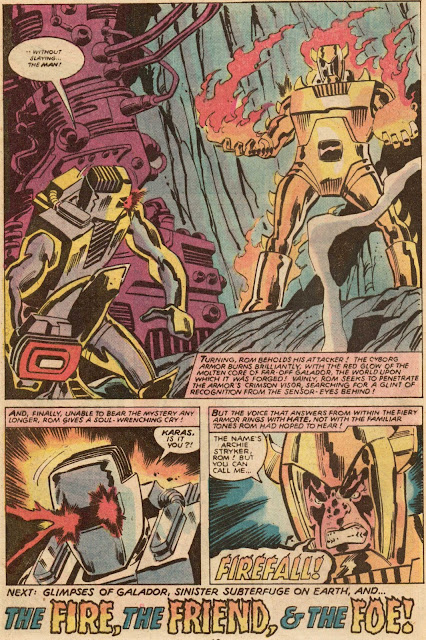 But it is not Karas. It is Archie Stryker. It is Firefall!

Now that’s how you end an issue of a serialized comic!

Like I’ve said a number of times in this piece, Mantlo and Buscema hit this one out of the park!

When I first grabbed this issue from the bargain bin I was a little worried, to say the least (especially after having had to drudge through both The Good Guys and CyberSpace 3000 the last two weeks). Here was a toy tie-in comic from the early 80’s, and the toy it was marketing wasn’t even all that cool.

Plus, didn’t Marvel already have a guy fighting cosmic baddies while encased in a protective silver armor?

This book had a lot going against it from the get-go.

But talk about overcoming obstacles….

It just goes to show you though, if you put the right team together, even the crappiest of premises for a title can explode with real force from the page. I can understand why Rom was able to last for 75 issues. This was a damn good comic and a damn good read.

Oh, I forgot to mention that the cover, which is also pretty cool, was done by Frank Miller and Terry Austin. That sort of adds to the whole package.

Was this comic worth the 50 cents I paid for it? Oh yea! It was a great read, a great ride, and a great example of what people can do in comics.

Who do I have to sleep with to convince Marvel they should re-release this series in Trade Paperback? Or how about a giant hardcover Omnibus? Woot!


TO READ MORE TWO-BIT COMICS
AND GET YOUR FILL OF MORE THINGS
POP CULTURE, GO TO
POP CULTURE ZOO