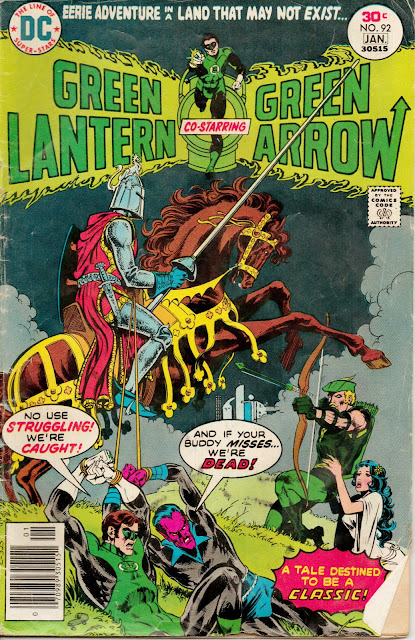 ALL HEROIC LEGENDS ARE DIFFERENT, YET ALL ARE THE SAME!
On January 20, 1977, Jimmy Carter becomes the 39th President of the United States. The next day he pardons Vietnam War draft dodgers. Also in January 1977, the Oakland Raiders beat the Minnesota Vikings in Super Bowl XI, Roots captures a massive TV audience, and Gary Gilmore is executed by firing squad in Utah. 1977 is also the year that Punk broke. In January, the record label EMI fires the Sex Pistols, and the Clash headline the opening of The Roxy in London.

In the comic shops, all this is ignored, and instead we get Green Lantern co-starring Green Arrow #92. This issue was part of the 2nd iteration of the Green Lantern series for DC which began in August 1960. From issues #76 to #122, it co-starred Green Arrow. I assume this was because there was a sale on green ink at the printers. 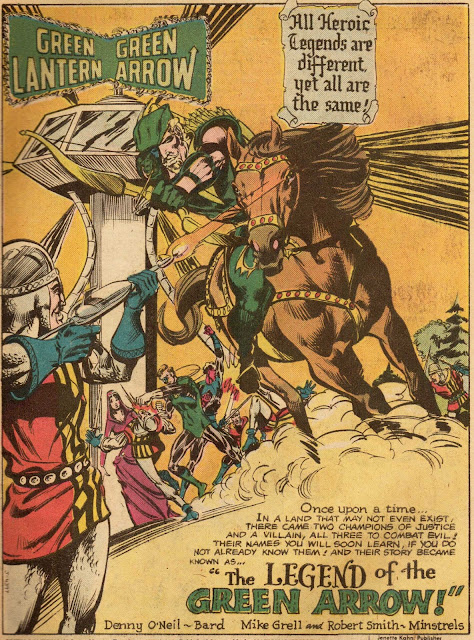 Although it does seem like that solider/knight guy is shooting the horse in the eye with his laser thingy. Poor pony.

So this story is called “The Legend of the Green Arrow” and is taking place “Once upon a time … in a land that may not even exist.” This should mean that this comic is going to be epic. Spoiler Alert: It is.

The story begins with a quick recap of what has occurred before. Sinestro has been defeated by the Green Arrow. Green Lantern took his Power Ring away from him. They locked him up, and “The Greens” did a little sightseeing in whatever country they were in. Sinestro was able to free himself using a second Power Ring hidden in his belt. The Greens go after him into space, and our story begins.

As they chase after him into space, they run into the Silver Twist. 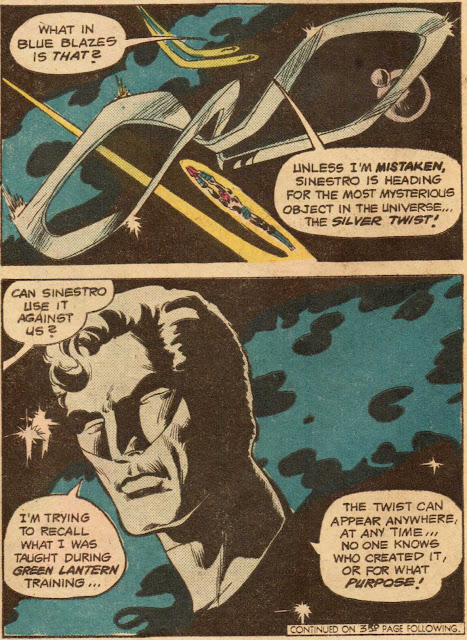 Ah yes, the Silver Twist. According to the Unofficial Guide to the DC Universe web page, The Silver Twist is a “rare space phenomenon (that) travels randomly throughout the universe, encountering sentient beings and transporting them into ‘alternate universes’ that appear to be (sic) change shape according to the traveler's thoughts. Each time it was entered, there would be a different universe.” According to Green Lantern, “No one knows who created it, or for what purpose!”

I call that a pretty convenient plot device. I like its name, though. There’s not a lot of gray area in something called the Silver Twist.

Anyway, Sinestro and Green Lantern battle around the Silver Twist. Green Lantern tries to warn Sinestro that doing so “may be dangerous,” but Sinestro says, “I’ll show you how much I fear the Twist,” and shoots through it.

I guess he should have feared the Twist. 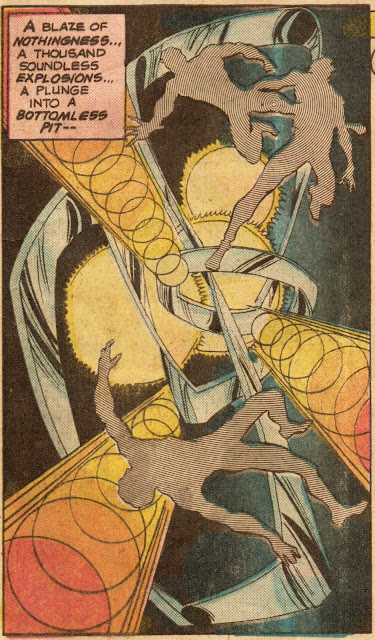 I call this the revenge of Chubby Checker.

The Greens and Sinestro are transported into a new universe and instantly are called upon to act heroic. They hear some woman calling for help and jump into action. 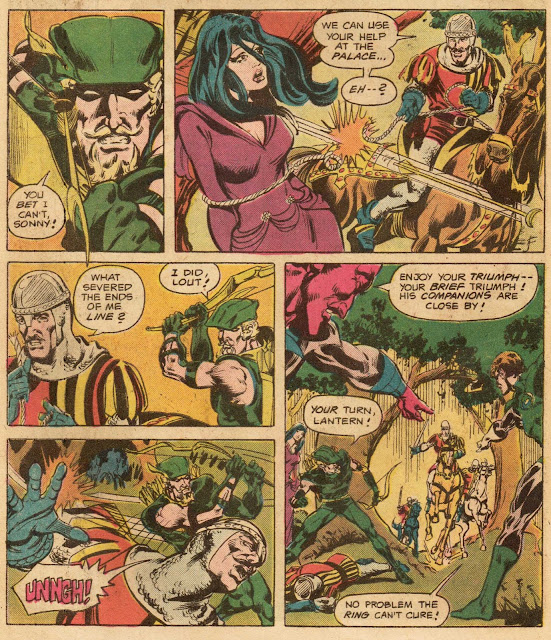 That Green Arrow is pretty bad-ass.

As Green Lantern jumps into the fray, he discovers that his Power Ring doesn’t function in this universe, leaving him to duke it out old-school style. Sinestro watches from afar. 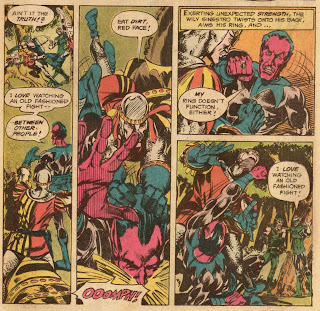 “Eat Dirt, Red Face!” For a writer of a Bronze Age comic, Denny O’Neil is tossing in some great throw-away lines in this book.

It turns out that the lady they rescue is named Marion. This universe is ruled by Prince Yuan, who has usurped power from his brother, the real king Rickard Stoutarm (let me know if this story sounds familiar). Prince Yuan is a despot, and he has figured out how to eliminate all electricity and fire(?) which keeps the people living like animals. He does this through another elaborate plot device which is somehow tied into this tower he built.

Prince Yuan is perfect for the role of the traitorous villain. 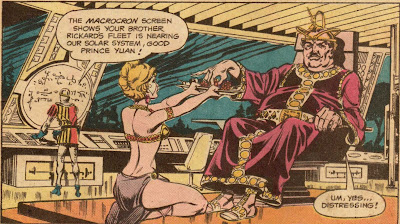 This corpulent sack of weasel feces oozes dickishness from the top of his goofy head piece to the bottom of his silly sandals. Just look at his name. Oh, and he is planning on ambushing his brother, the true king, in space upon his return.

The Greens and Sinestro team-up to save the people from the rule of Prince Yuan. To do so, though, Green Arrow concocts an elaborate plan to get into the Tower.

The plan involves dressing Sinestro up as a jester. 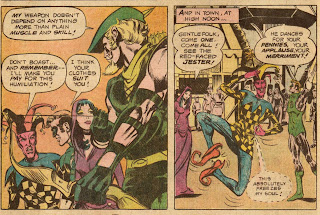 You got to love Sinestro’s jig here, especially since it “freezes” his “soul.”

While Sinestro’s buffoonery distracts the guards, Green Arrow sneaks into the tower. First, though, he has to get past one diligent guard. 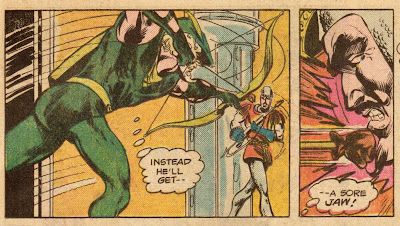 I could get all into the science of putting a boxing glove at the end of an arrow and how impossible that probably would be, but this is great stuff! A real knockout (see what I did there)!

Green Arrow takes the elevator up to the penthouse of the tower. There he discovers another guard, but also realizes that in the tower, electricity still works! 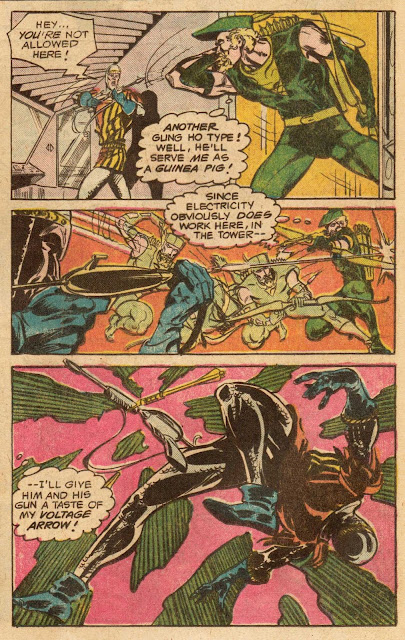 Inside the penthouse, Green Arrow pins Prince Yuan to his throne with some sort of crescent arrow, knocks out another guard with his bow, and begins to destroy the hardware in the tower that has been keeping the electricity (and fire?) from flowing.

Is that Green Arrow rapping? Wait… no, this is 1977. It probably sounds more like an Eagles song.

Now inside the tower, Sinestro and Green Lantern’s Power Rings work again. They begin to really tear stuff up. Green Arrow tells them of Prince Yuan’s plan to murder the rightful king. Green Lantern says he will stop the space fleet from committing fratricide, and asks Sinestro if he would like to help.

Sinestro is all in. 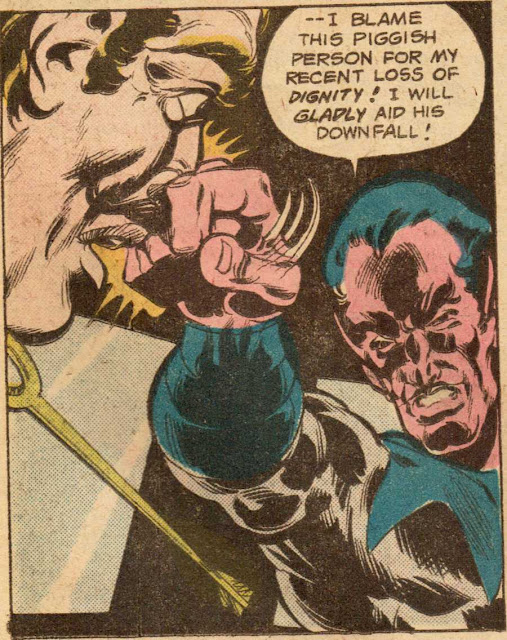 Before they leave, Maid Marion tells Green Arrow that he is the most noble of the three. Arrow says, “That’s the nicest compliment I’ve ever gotten,” and kisses her on the forehead.

Off into space for the three. They encounter Prince Yuan’s fleet and move in to stop them. Green Lantern wants to “fuse their rocket tubes and their gun portals,” but Sinestro says he has his own methods of taking care of this problem.

Sinestro’s method? A killing spree, even after they surrender.

I had forgotten what an evil bastard Sinestro was while reading this tale. Denny O’Neil does a fantastic job of reminding the reader that Sinestro is nobody you should be cheering for, ever.

It is at this very moment when Sinestro reveals his true colors once again, that the Silver Twist makes its Deus Ex Machina return and sucks the three into its “exploding, falling, spinning through eternity” psycho-whomp, but this time with the Greens go one way and Sinestro goes another.

Green Arrow wants an explanation about what just happened to them. Lantern tells him, “Despite our civilizations, we’re ignorant creatures at large in a vast, mysterious universe.”

I have no idea what he is talking about.

Best not to think too much about this, I guess. It sort of takes away from all the fun we’ve been having.

I love this comic. It’s a self-contained tale that has it all: action, romance, humor, and science! The artwork is dynamic and fun. The writing is clever and straight-forward. The heroes are heroic, the villains are villainous. The whole thing fits together in a perfect little package.

Was it worth my two-bits? Absolutely. Not only did I have a great time reading the comic, I got to be a little nostalgic for 1977, which brought back some real nice childhood memories for me.

Reading this also got me a little more excited for the upcoming Green Lantern movie hitting the theaters soon. It sure would be swell if Green Arrow had a cameo in it. Such is the stuff legends are made of….