The Waiting Room: Sara L. Jewell reviews DID YOU SEE ME? by Sophia Foster-Dimino

Shorter but just as, if not more, sophisticated than Nick Drnaso’s Sabrina, Sophia Foster-Dimino’s Shortbox book Did You See Me? is another 2018 comic that calls into question our experiences of lived reality in the digital age. Underpinned by concepts that flirt with Jungian psychoanalytic theory, Foster-Dimino pens a story about an unusual distance romance to explore how we currently define liminal spaces and emotional infidelity, as well as our complex identification with isolation and fantasy.

Did You See Me? follows David, an editorial assistant by day, self-described avid reader and the host of a fiction podcast - Twitter bio that bespeaks a definite tendency to dive deep into fantasy. He has a fairly active Twitter following of about two and a half thousand people, and one day he receives a cryptic reply to one of his tweets: a user who goes by “emma” accuses him of failing to apologize for knocking her over…in a dream. David, initially skeptical and more than a little unnerved by Emma’s outrageous messages, writes her off as a troll and muses over the internet’s function as a “great equalizer” to his girlfriend, Claudia, who jokes in turn that if David saw Emma in person he’d be able to tell immediately that she was someone to avoid. 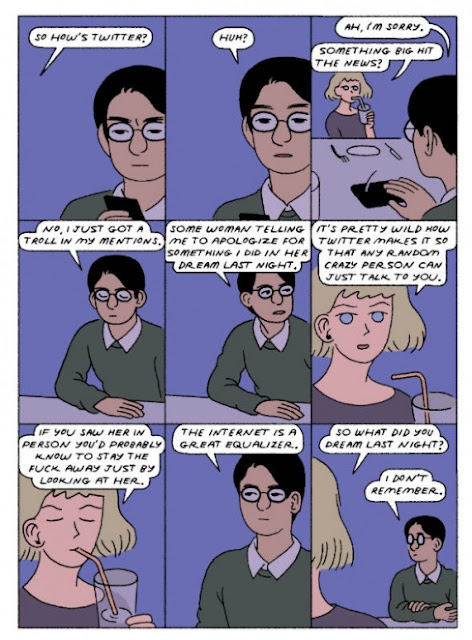 Our ability to hold what happens online – as we might with dreams – as “unreal” is what allows users to be callous and cruel on the internet in ways they would never be in real life. The degrees of separation between the self and the avatar is what allows David to write "emma" off in the beginning. If he hurt her by what he said online or what he did within a shared dream, it doesn’t matter because he doesn’t even remember, and it wasn’t real. In his second dream with "emma", when he apologizes for knocking her down on the first night, David admits that he was “feeling like a kid – no empathy”, and it’s not irrelevant that this statement could also apply to any number of ageless, anonymous internet trolls.

But the implication that "emma"’s Twitter and dream presence is an idealized avatar, and not her actual self (which David would know to avoid), does indeed come into play near the end of the book. As the story progresses, David begins, reluctantly at first, to acknowledge that "emma" is in some way present during his nocturnal sojourns into the dreamscape. David becomes involved with "emma" romantically and sexually, but “only” in dreams, and, to a very limited degree, online. He breaks up with Claudia and makes plans to meet "emma" in the “real” world.

Did You See Me? is most interested in liminal spaces, whether physical, emotional, or psychological. But where we might assume that David’s dreams are that kind of in-between time, that sleep is liminal, the story complicates this reading. Foster-Dimino’s bright, saturated art clearly demarcates the three spaces which we see David occupy. The story begins on his phone screen, alternating between full-page splashes of David’s phone on, with Twitter open, and the empty black void of either the back of the phone or the phone off. There is no hint, visually, of anything existing outside of the phone – significantly, we don’t see David’s hand holding the device, even when he’s in the middle of composing a tweet. 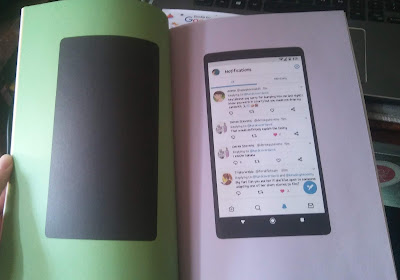 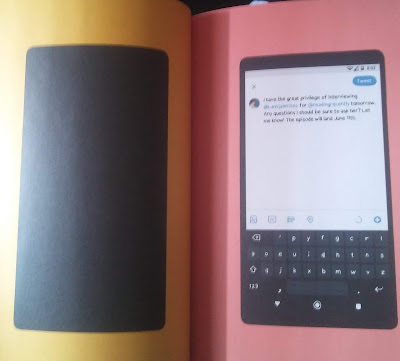 When we see the “real” world, Foster-Dimino switches to more conventional panels, albeit without gutters – David’s days bleed together, sets of isolated moments in the office, with Claudia, commuting, and in bed on his phone. These moments seem like they are frozen in time, that reality itself is liminal in its function as the period intervening between David’s trysts with "emma". In his dreams, conversely, David is unboxed. The distinct illustrative dream style eschews borders, word balloons, and uniform line art, instead opting for a chaotic and mutable world in which David and "emma", whose bodies are as visually mercurial as the rest of the dreamscape, leap between objects, animals, places, food, and Escherian stairwells. 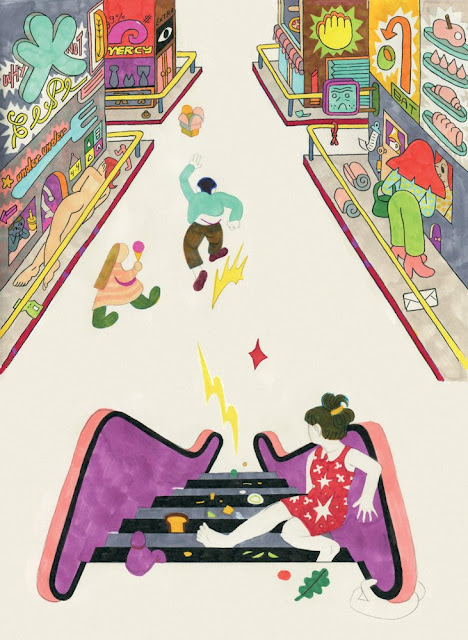 Whereas David is always engaged with others on his phone or in his dreams with "emma", in “reality” he is starkly isolated from the world around him, lost in screens or staring into space as life happens on the periphery of his awareness. In general, the characters rarely make eye contact with each other in social spaces, and David seems impervious to the emotional presence of people in his vicinity – even Claudia’s explosive anger when he admits he’s cheating on her doesn’t appear to penetrate his unruffled exterior very much. 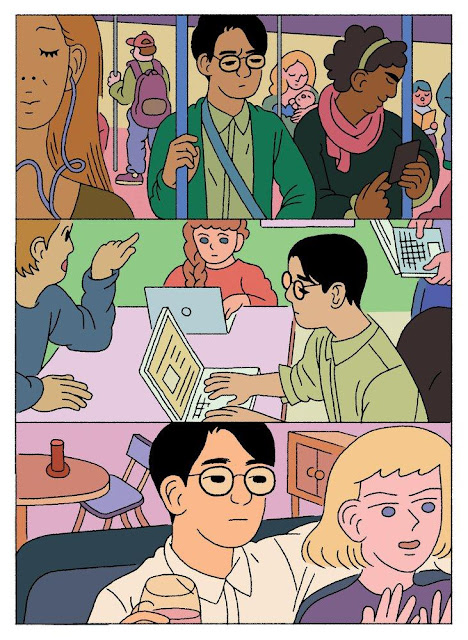 Foster-Dimino’s sophisticated approach to emotional infidelity shows David gradually come to the realization that even though he isn’t “cheating” in the physical sense, his mind and heart have begun to orbit his connection to "emma" and distance him from his real-world relationship. When he breaks up with Claudia, he claims that “he didn’t realize it was happening until it was too late”. The question of whether David’s dreams of “emma” are really the tête-à-têtes they appear is irrelevant, though visually we, the audience, see David and "emma" have sexual encounters, David asking Emma “are you really real right now?” In shifting some of the responsibility away from David for how he is pulled, inexorably, into his Twitter DMs and then into dreams, Foster-Dimino asks us to question the influence of passing liminality, not on our bodies but, in a deeper sense, on our lives.

We spend approximately one-third of our lifetimes sleeping, and recent studies report that we spend nearly six hours a day on connected devices, a number that’s rising steadily with each passing year. The time we discount as banal – liminal time during which we are waiting to reach the main event – is increasingly the very fabric of our lives. David’s contention, that his engagement with a mysterious and alluring internet stranger has accidentally become something with the power to displace his relationship, could be any of ours.

The idealized avatar "emma" inhabits, which turns out to be a screencap of a celebrity from a television show, coupled with the fact that "emma" and David admit, at separate points in the story, that they know nothing about each other, speaks to reality’s foil: fantasy. The real appeal of the internet, Foster-Dimino seems to say, is that we can indulge our fantasies without their most outlandish components ever being exposed. We can believe that we “know” the celebrities that we follow on Instagram. We can believe that the potential romantic partners we see from afar are perfect in the ways that we need them to be. And we can identify with the mysterious and the inscrutable by projecting ourselves onto it.