One Thousand Images for a Single Idea: Fred McNamara reviews WHAT IS 'HOME'? by Anja Uhren 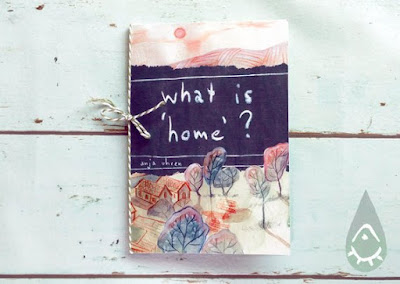 The quotation marks in the title of Anja Uhren’s comic What Is ‘Home’? serve as a gateway into its thematic exploration. The emphasis placed on the word home forces the reader to consider what exactly constitutes a ‘home’? When reading Uhren’s efforts, it’s clear that a sense of subjectivity is at the heart of the book, since part of What is ‘Home’?’s construction relies on the artist bringing onboard numerous contributors to the comic’s questioning title. This collaboration makes What is ‘Home’? a world away from her other works. Here, Uhren presents an intensely subjective piece of sequential work. The nature of the comic ensures that no answer is the same, no answer is right or wrong.

Uhren utilizes the far-reaching answers to her titular question to craft a visual journey, skipping from page to page, bringing a variety of different answers to life. What is ‘Home’? may be brief, clocking in at 35 pages, but each page packs in a world’s worth of answers via a divergent, intriguing selection of ideas and Uhren’s characteristically melancholic artwork. Nearly every page in What is ‘Home’? serves as a splash page, a canvas built to incorporate multiple sets of answers which, while separate, complement each other enough for Uhren to fashion an overall idea. While the definitions of “home” may stand apart from each other, there isn’t a sense of jarring ideologies from the comic’s participants. Uhren knows how to categorize ideas based on their tone and the image of home they conjure forth. 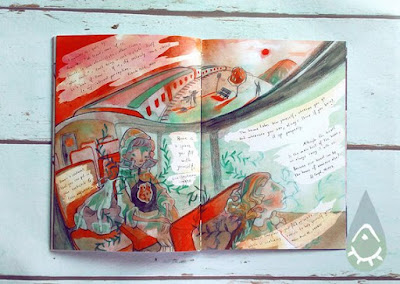 The result is an eloquent, intimate flow through literal and metaphorical depictions of home. Some of the answers Uhren uses are straight-forward, unflinching in their directness, while others are more abstract, more reminiscent. Throughout, though, Uhren anchors her illustrations with an exaggerated sense of shape and perspective that lends the comic a rather dream-like quality. Each image is held together by a limited color palette, which helps to cement the overall mood of that page. Uhren’s visual sensitivity is in full flow here. Lighter colors are used to reflect happier, pleasant musings on the meaning of home, while darker, pensive colors illuminate the more negative or unsure connotations.

Uhren’s use of shape and shadow, in particular, helps give What is ‘Home’? a sense of depth and scale. The architecture of Uhren’s various homes is often seen shrouded in murky shadow, as if to comfort or confine the individuals inside, depending on the accompanying definition of the term. There’s a quiet confidence in how Uhren takes these similar visual combinations and pulls forth separate moods from them. Answers and art may be working in tandem here, but moments like these show how Uhren’s craft is very much in charge. 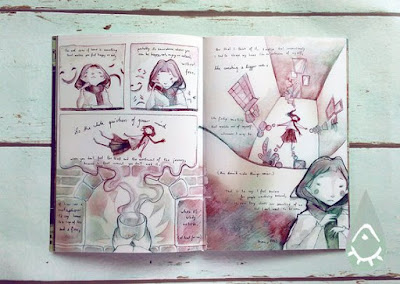 The uncategorized pace of the comic means that, as a reader, you’re never quite sure what manner of answer you’ll be getting with each page turn, and What is ‘Home’? is all the better for it. Rather than coming across as erratic, there’s a sense of ebb and flow to the book, swaying from light to dark and back again. With such a wide variety of ideas to bring to life with her artwork, it’s a testament to Uhren’s skills as a visual storyteller that What is ‘Home’? bears a serene, almost calming sensibility.

Of course, Uhren isn’t the sole voice in this work. If anything, she’s rarely heard at all, as she allows her 50+ contributors to wax lyrical over their personal definitions of home. The variety of answers makes What is ‘Home’? read like an anthology, but Uhren’s cohesive style gives it a potent, sequential definition. Uhren herself acts as something of a curator for these thoughts and musings, as the definitions span a variety of lengths. Some consist of a single sentence, while others form numerous paragraphs, giving What is ‘Home’? an all-encompassing narrative depth. 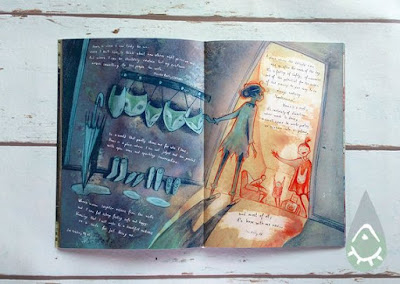 The answers themselves boast an inquisitive sensitivity. Some define home as a literal, definitive object; a “big blue house”. Others take a more lyrical approach, linking the physical definitions of home to an emotional state: “Home means more today than it did yesterday and it’ll mean more tomorrow than it did today”. Uhren’s openness in bringing together clashing perspectives gives What is ‘Home’? a universal mood, as if every conceivable emotion tied to the idea of home is represented here. That variety of answers also ensures that the comic’s tone is kept in flux. Both positive and negative depictions of what home exactly means are scattered throughout the book, meaning that despite the comic’s overall melancholic mood, it rarely lingers on one specific feeling for too long.

Yet the text itself remains somewhat underserved by Uhren’s art. Her caricatured visuals dwarf the accompanying text, to the point where it’s occasionally impractical. The text is at its most effective when it’s ingrained into the furniture of Uhren’s panels, and when there are panels rather than splash pages. In Uhren’s splash pages, the text appears somewhat loose and untamed. On one level, that informal attitude adds to the low-key, sketchbook feel of What is ‘Home’?, but the narrative of the comic is at its most muscular when its visual structure is at work. The playful integration of the text amid Uhren’s diverse images illuminate their message, and also allows Uhren’s flexible style to unwind, adding to the exuberant intimacy of this endearing comic. 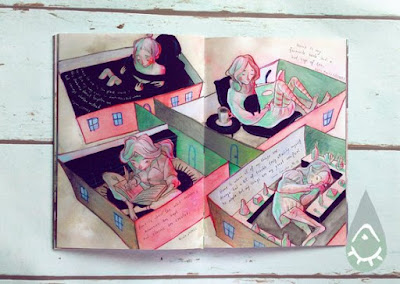 What is ‘Home’? is a spellbindingly distinct read. Its romantic qualities give even the darker moments an immersive feel. Its unique structure and gorgeous visuals fuse together into a charmingly sweet comic book. Uhren’s talents have always been well-tailored to visual narratives. Here, though, she allows her own narrative to take a step back and allow for a collaborative spectrum of ideas, musings, and poetry from which to build her comic.

What is ‘Home’? doesn’t offer a definitive answer to the question it poses, but it isn’t meant to. Rather, What is ‘Home’? shows that a word many might think to have a universally appreciated meaning has, instead, wildly diverse ones which Uhren explores to great effect. Her sublime artwork has little difficulty conjuring forth the multitude of emotions stated in the myriad of definitions. With melancholic colors and distorted shapes crafted to exquisite effect, the book’s overall message is executed with razor-sharp clarity. What is ‘Home’? stands as an enjoyably eclectic, experimental entry in Uhren’s growing back catalog of warm, hypnotic visual narratives. 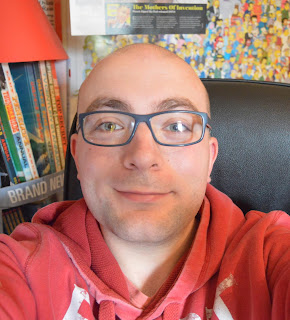