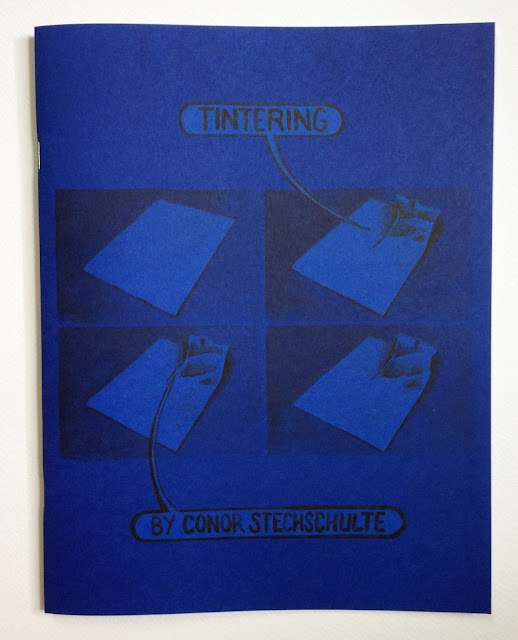 "Art is always about 'something hidden.' But does it help us connect with that hidden something? I think it moves us away from it."

So begins anarchist theorist John Zerzan's widely-discussed (in some circles, at any rate) essay "The Case Against Art." Zerzan, being one of the leading scholars and spokespeople of the "anarcho-primitivist," or "Green Anarchist" movements, essentially extrapolates upon the conclusion that he serves up in the first paragraph of his essay for several pages, but as ludicrous as his central premise may seem on its face to most readers coming to it from outside his milieu, he manages to advance some reasonably thought-provoking, if fairly basic, arguments in defense of the idea that art --- indeed, all forms of symbolic representation --- are inherently inferior facsimiles of actual things already-extant in the natural world (a painting of a sunrise, no matter how gorgeously executed, will never be as awe-inspiring as an actual sunrise, etc.), and that the idea of reducing something or someone of infinite complexity to lines on paper or strokes on a canvas is necessarily tyrannical almost by definition.

Still, "The Case Against Art" loses me more quickly than most of Zerzan's other work, simply because I think he misses the essential truth of why art is created: Zerzan sticks doggedly to his preconception that art is about reproducing something --- a place, a time, an event, a feeling --- while most folks, myself included, are more of a mind that art is about interpreting any/all of those things, and the artist subsequently expressing that interpretation to others. Truth be told, I'm surprised that Zerzan, as a dedicated anarchist, doesn't (or can't) understand that the creation of art is about as unique and singular an experience as one can undertake. I can see a far more intellectually-sound case being advanced against, say, looking at or otherwise experiencing someone else's art rather than creating your own, but we're getting into some fairly tall and tangled metaphorical weeds if we go down that road, so I'll probably just table it for another time.

Still, I hope it's clear that while I harbor no particular pretensions toward being an art scholar myself, I have spent a fair amount of time thinking about art --- not just various works of art, but the nature and purpose of art itself, the reason for its existence in the first place. Along those lines, it’s particularly interesting that modern archaeological scholarship has essentially overturned the time-honored notion that the first things primitive man did were, in order, finding something to eat, finding somewhere to sleep, finding somewhere to shit, and finding a handy cave wall to record it all on. Modern scholarship now posits, instead, that humans didn't adopt any sort of symbolic culture at all for somewhere in the neighborhood of a million years? That means something, in my view, even if I'm not entirely sure what. Maybe art may not be as essential to human existence as I always thought. Maybe Zerzan's more right than I gave him credit for. Maybe art's existence does need to be justified, on some level.

You know who else has given these questions --- or ones very much like them, at any rate --- a lot of thought? Conor Stechschulte. 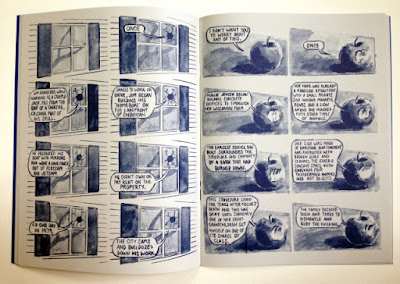 Regardless of whether or not Stechschute has read Zerzan’s essay (or any of his work, for that matter), his 2017 self-published comic Tintering (its title spliced out of Agnes Miller's unintentionally anarcho-primitivist statement that "artwork has only a tintering of what it attempts to represent to the artist or responsive observers") makes it clear that he's definitely tuned his mind to the question of "why even bother with this shit?" in regards to the creation of art on many occasions, and that he's had some thoughts on the subject.

A key word there: "thoughts". This is no polemic, by any means, and Stechschulte doesn't even suggest any particular answers. Instead, he relates a series of five, for lack of a better term, vignettes, each concerning an artist who invested a tremendous amount of time, energy, probably even money, into highly idiosyncratic projects designed to convey deeply personal messages in public spaces --- only for their creations to ultimately be destroyed. Sometimes by authorities. Sometimes by heirs/surviving family members. And sometimes by the artists themselves. 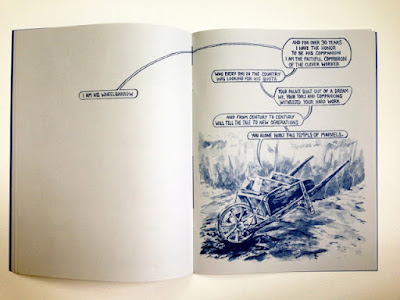 The ostensible "narrators" for these tales (all of which begin with the word "once") are a succession of inanimate objects in various states of disrepair or decay (a smashed window, a broken-down wheelbarrow, a rotten apple with a bite taken out of it, an inoperative sink, etc.), each designed to highlight Stechschulte's theme of the impermanence, maybe even outright transience, of all things --- artistic inspiration included. His cartooning is no doubt lush, his choice to riso-print it in largely-faded (or, at the very least, fading) shades of blue is not only artistically apropos but downright gorgeous --- this is illustration imbued with a sense of loss to match its melancholy precis. There's something else going on here, though, beneath the surface level, that I think bears some consideration, as well ---

These windows, wheelbarrows, apples, and sinks aren't/weren't works of art, but objects of utility designed not for something so indulgent as interpretation, but for specific purposes. There's no debate over whether or not they once had essential functions, they clearly did --- and if even these objects don't stand the test of time, what chance does something as mercurial as art, which may not even have much value to its creator a few years down the road, have? 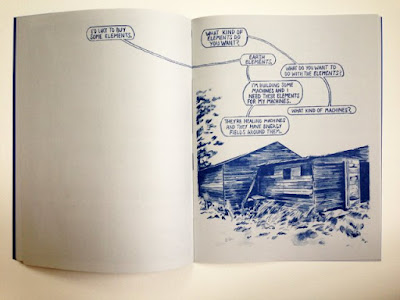 Meditations don't come much more --- well, meditative --- than this, but there's a distinct and consistent authorial viewpoint that's apparent throughout. It's one of constantly taking stock of not only the ultimate purpose of artistic creation, but of the need or impulse that gave rise to the said act of creation in the first place. It asks not only "what are we doing?," but "why are we doing it?," and is unflinchingly honest enough to admit that not only are there no "good" answers to those questions, there are no real answers at all apart from those you come up with yourself, of course. Yet even those are likely to be shifting, transitory, maybe even entirely different every time you re-read this comic. And trust me when I say you're going to re-read it a lot.

Tintering sells for $8.00 and is worth ten times that much, at least, in terms of sheer philosophical weight. It can be ordered directly from Conor Stechschulte via his "Crepuscular Archives" Storenvy site.