These Are Butchers After All: Daniel Elkin reviews THE AMATEURS by Conor Stechschulte 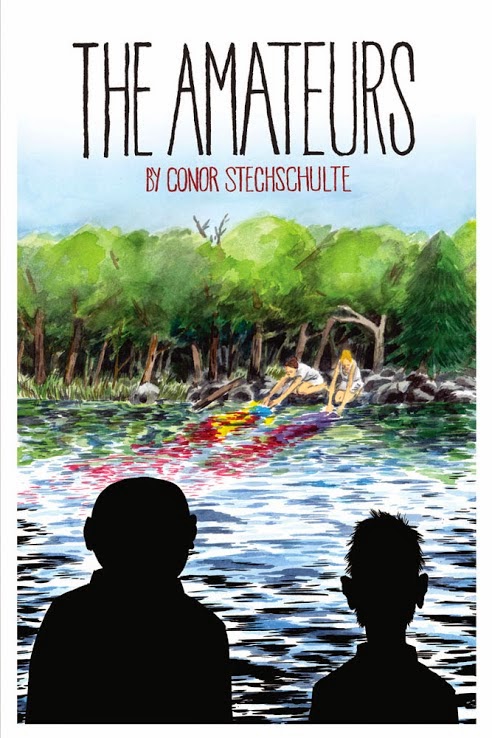 (Editor's Note: This is a reprint of a review that originally ran June 2014)

And yet, as with all of the discomforting aspects of our brutishness, we manifest our Cartesian Dualism through an exploration, the creative act, stamping universal truths on the forehead of the ape, smug in our control, distancing ourselves from ourselves through judiciousness.
Once we cage our chaos in form, the art therein becomes a gift for other apes to ponder as they secretly shudder at the self-portrait it casts back.
Such is the stuff of Conor Stechschulte's debut graphic novel, The Amateurs, a book that explores the nature of self as defined by action, as much as it reveals the simian beneath.
Ostensibly, The Amateurs is about two butchers who have forgotten how to do their job. It is encased in a framing device hinting at witchcraft and burgeoning female sexuality, and is sub-plotted by a brief commentary on the repression inherent in the roles we are expected to place in our day-to-day. It is surreal, it is engaging, and it is violent.
It is also art.
Stechschulte's black and white, kinetic, and inky pages push you through the narrative. His main characters, Jim and Winston the butchers, are amplified through their abstraction. As they are less specific in detail, they become more universalized. Thus, though they are themselves, they are all of us together, stumbling through the miasma having lost the specific knowledge of who they are as they no longer recollect what it is that they do. Having lost the spurs of their social definition, they resort to their true selves, violent, petty, and brutish. They descend, awash in offal, blood, and horror.
These are butchers after all.

In the absence of experience, we are all amateurs. But unlike the Blakean sense of Innocence asking us to pipe a song about a lamb, in Stechschulte's world, here in our innocence we are monsters. When we forget how we are supposed to act, he is suggesting, the horrors we do.
Everything about The Amateurs verges on the taboo, yet Stechschulte is able to teeter on the scaffolding to keep us engaged in his construction. The idea of memory is the refrain. His framing device is excerpts from the diary of Anne E. Nemeth, student, Lyre School for Girls. As all diarists know, the act of writing down experience helps keep the past alive in some manner. It is a document of memory, a written recollection of who we were to provide us access into who we have become. It is important only insomuch as it maps our definitions.
As the framing device, the excerpts from Anne's diary are full of clues to the larger narrative. The first excerpt recounts her experience finding a severed head on the banks of the river which spoke to her, admonishing her to “Look Back”. While a severed head on a river bank is already teeming with metaphorical heft, its forewarning provides the necessary context as introduction.
Her next diary entry documents when she stumbled upon two of her fellow students carving a love message into the shell of a live turtle. This experience too spurs reflection not only about Anne's own development, “What have I to look forward to in my oncoming maturity? What other abominations have I yet to see...” – but it also echoes the ape within, adding commentary to the larger story of the butchers who, by then, are covered in blood and shit, having lost chunks of themselves in the process.

The final diary entry completes its function as a framing device. Here is ritual, rite of passage, the demarcation between innocence and experience. “What binds is what scatters, what scatters is what binds.” This is the central construct of this book and, through its exploration, The Amateurs is revelatory. Rivers and ribbons, innocence and experience, social constructs and our bestial nature, Stechschulte spelunks the dichotomies inherent in imposition, constructed through memory.
Were Stechschulte to have chosen to only give us the story of our amnesiac butchers, then The Amateurs would be nothing more than satire, farce, or even low comedy. But Stechschulte has more than this in mind. As an artist, he seems inherently to understand that his role is not only to provide access and create a reaction, but also cup his hands, hold the water, and dare us to drink.
In an interview he did with CBR, Stechschulte describes his book off-handily as “a horror/comedy story about two butchers with amnesia. Also I might say it's 'weird,' and maybe 'a little gory.'” This is your access, easy to define. But as the interview continues, he says, “I felt I had to approach its themes from an oblique angle. It worked best to place the content of the book in the space between those two or three stories.” Here is the water he is offering, this is the dare he is tendering.

Be forewarned, though, there are consequences to drinking this water, cool and revitalizing, fresh from the river in the woods. After a feverish night, you may wake up the next morning forgetful of how you are supposed to act. Once so unencumbered, you are free to be who you are.
And who are you? Well, that may just be the subject of another horror/comedy story, my friend.