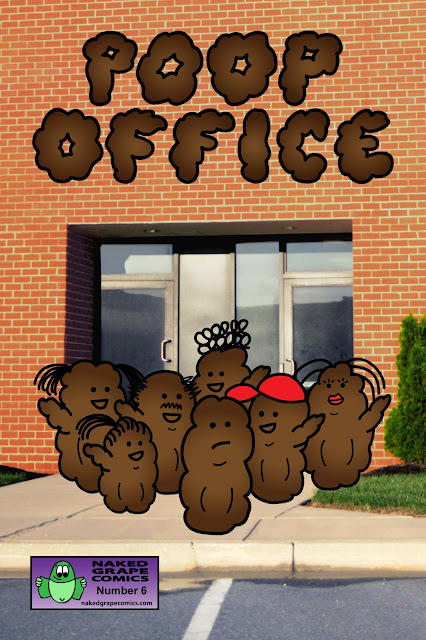 I have a complicated relationship with my understandings of Poop Office. This has been a comic that has been eating into the periphery of my intellectualizations for the last couple of years. With each subsequent issue, I have seemingly snatched at hyperbole as justification for my comprehension and my unease. As if it’s not a joke. As if it is important.


May, 2013: Poop Office #1 -- “Is Poop Office a modern take on the absurdity of the bureaucratic system inherent in a top down profit seeking corporate structure where people are stripped of their individuality to the point where they constantly exist in such a perpetual state of self-loathing that they become nothing more than talking turds? Has Ben Pooped written a 21st century update of Kafka's Metamorphosis? Is Poopert the Gregor Samsa of 2013?”


December, 2013: Poop Office #2 -- “Poop Office #2 is genius. The deadpan nature of the writing mixed with the absurdity of the situation, the fact that this is an office staffed by poop, elevates this simple shit joke into social-political commentary. It's not satire, it's something else. It rejects the rational, it rejects the culture, it embraces the disgust, it inverses the process.”


February, 2014: Poop Office #4 -- “Much like we shame-hide our defecation from the eyes of others, we keep our confrontation with the existential angst of twenty-first century existence veiled behind digital distractions, weird sexual deviations, and the bending of psychoactives. This comic kicks open the bathroom stall and shines the Ty-D-Bol of truth in your eyes.”


I worry that in my need to make sense of the world, I had lost my critical distance and had covered this comic from the perspective of what I wanted it to be, more so than for what it actually is.


After all, it’s a comic about an office staffed by poop.


Now issue #6 of Poop Office has just come out on Comixology and, in the interim, I’ve become a much more jaded and cranky individual. Lately, much of my sense of the world has come through the apprehension of Corporate Comic Book Crossovers and grading high school freshmen essays. My brain is a scary place nowadays and those who love me have unfortunately been subjected to the various harsh manifestations of my moods. It happens. I’m sorry. I do love you so.


Given all this history and my present perceptions, does Poop Office still stand up to my new cantankerous critical sensibilities? Is it really a Dada deconstruction of the dehumanization of modern life, or is it, in fact, just a shitty one-note gag comic?


Somehow Poop Office #6 manages to be both. Yes, it is a one-note gag comic full of puerile puns such as “Staph Meetings” and “Poochase Orders” and “Repooption Desk” and often times the “jokes” fall flat on the sidewalk like the defecation of a Great Dane with the runs. Yes, it is crudely drawn and crudely conceived and just plain all-together crude at times.


But underneath it all, the corn kernels in the turd, there still floats a level of commentary that is merciless and remorseless. Ben Pooped is pointing a finger at you and there, in the whorls of his print, you can see both his condemnation and his empathy. 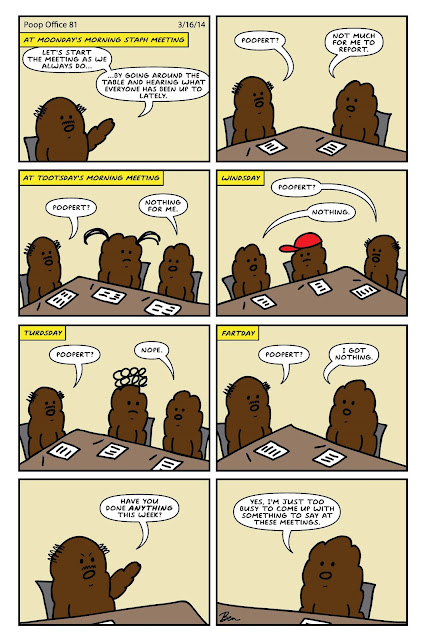 Life is so often a series of compromises and concessions. Here, in the system, you learn the rules and, more often than not, abide by them out of fear or laziness or just wanting to get along. Almost every big decision requires hoops to be lept through, some of them large enough to pass a Buick through, some of them seemingly tiny … and on fire. There’s a compact that’s a trade-off and most of us don’t even know we signed on the dotted line. There is a bureaucracy in all structures and when we gather together in order to proceed, a pact is drawn up to which we abide.


But when things shift out of cries for safety or the desire for profit or the need to be loved, sometimes … most of the time … that pact wobbles and a deadening absurdity starts to saturate interactions. It becomes fecund with folly.


We find ourselves working in a Poop Office. 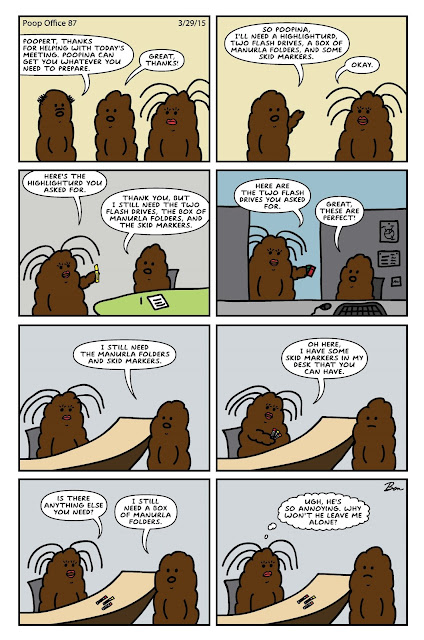 Poop Office reeks of the stench of this gassy image. Each frustration that Poopert, the main character in this comic, encounters as he tries to navigate the seemingly Kafkaesque narrative of office politics mirrors the daily irritations and grievances that we all experience, those random roadblocks that result as we apply contact cement to the veneer of order on the substrate of chaos that we use to build our existence. We laugh at the humor of Poop Office in the same way that we engage in schadenfreude and laugh at another’s misery -- “better them than me” we think to ourselves while knowing all along that it’s happening to us all the same.


Poop Office speaks to the cynic in us, the one resigned to the fact that this is the sum of our lives. We sometimes begrudgingly, sometimes passively make trade-offs to stay sane and keep moving forward. With each cop out and compromise we fall further and further into the bureaucratic funk that provides the rhythm to our endless ennui. Each page in Poop Office echoes that song. The dance floor is full. It begins to buckle under all that weight.


Poop Office #6 is a bamboozle. It wears its stench hidden behind the mask of levity, of childishness, of mockery and buffoonery. But Ben Pooped is the Jonathan Swift of 21st century, slinging the scatalogical satire of the void. Instead of taking on those responsible, though, he casts us the shit we have become due to the small pieces of our humanity we trade daily in order to exist in this world. 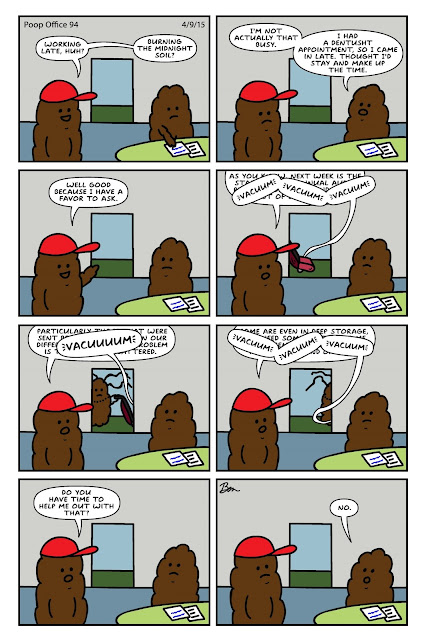 When we laugh at Poop Office, and yes, you will laugh (it’s funny, don’t ya know), we do so with a grimace. Sometimes, they say, it’s best to laugh at yourself.


I think they say that because otherwise all we would be doing is screaming.

So grab yourself a copy of Poop Office #6 on Comixology or on your Kindle -- then head on over to the Naked Grape site and get yourself some Poop Office swag (who doesn’t need a poop plushie, after all). We are all in this together, after all, floating in the bowl, stinking up the joint, waiting to be flushed into the void.