Books in Bites 6: Three Comics Worth Your Attention Let’s face it, art about making art oftentimes runs the risk of being like writing about not being able to write. It can be self-indulgent, bordering on pathetic, and perhaps your struggles are not really as herculean as you may conceive them to be. Performance art also suffers from too many “types” having to spend far too much time explaining themselves rather than letting the experience speak for itself. When your artist’s statement sounds like it was generated by an algorithm, you may want to find another form of expression.

Luckily, Yumi Sakugawa’s new book from Retrofit/Big Planet avoids the traps of pretentious “try hard” by being engaging, keeping you on your toes, and mocking itself all while having a hard statement driving its narrative. Ikebana is ostensibly the story of Cassie Hamasaki’s presentation of her art school senior thesis. Beginning by standing in a bowl of water wearing white briefs, flower pasties, a lotus crown, and a single wing made of palm leaves,it is her “artistic intention to embody Ikebana on a physical, emotional, and spiritual level.” Ikebana is the Japanese art of floral arrangement in which, according to Ikebana International, the arrangement is a living thing where nature and humanity are brought together. 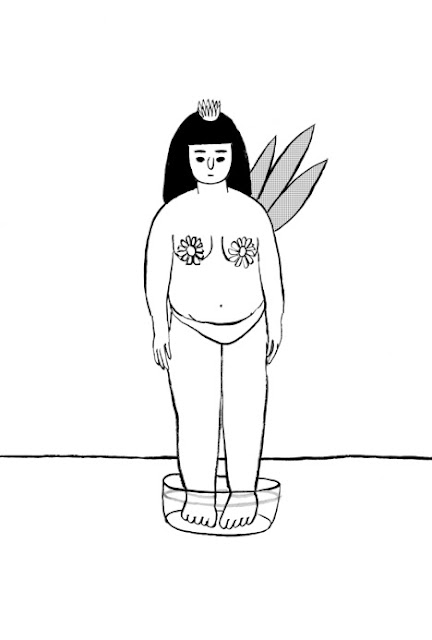 It is when Cassie takes her performance outside of the confines of the classroom that the story transcends whatever easy mockery the reader might be thinking. It is not just the journey from the small bowl to the larger ocean that churns with import in Sakugawa’s telling, but it is also the interactions that Cassie has along the way that speaks of cycles and intent. Everything seems to be operating along a binary plane, in which each reading demands access to other thoughts premeditatedly, with intention and purpose. 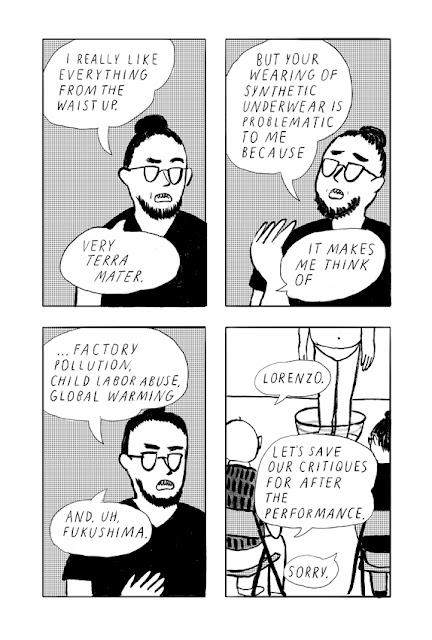 Finally, as much as we wear guises otherwise, we all are in it together. By the last two panels summing up Sakugawa’s thesis, the reader is fully aware of where he or she has been, and what it has taken to get there. It’s one of those quiet comics that you keep coming back to because you suddenly realize that your initial reading wasn’t quite complete.

You can pick up a copy of Ikebana here. 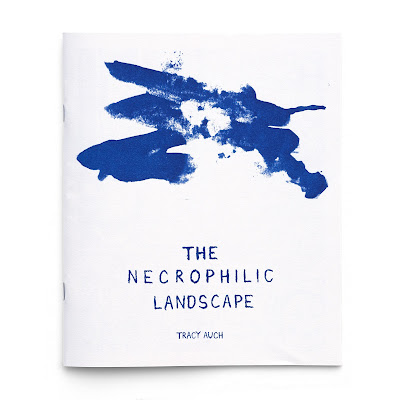 I’m going to come right out and say that I didn’t like Tracy Auch’s The Necrophilic Landscape on my first read, and I liked it even less on the second. It’s messy and disjointed and thick. But I am including it here because it is utterly fascinating -- not in a “can’t help but rubber neck a car wreck” way, but instead because it is so far out of my conceptions of storytelling and because of the secret truth it reveals, a dark truth that we all know, but don’t want to face.

2dCloud says of The Necrophilic Landscape, “Drawn in 2010 and never completed or published, Tracy Auch's gothic, grotesque, and fragmentary epic is presented for the first time in this riso-printed ashcan edition. The anxious and darkly comic narrative takes place in an all-male world in which sexual reproduction does not exist and the primary class division in society is between men and children. With the thematic sensibility of Nikolai Gogol's short stories and the suggestive, world-building scope of British roleplaying fantasy art, The Necrophilic Landscape is certain to enthrall and disgust readers who can finally encounter it for the first time.” 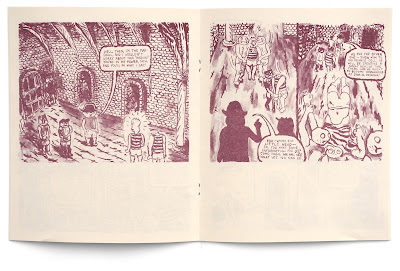 Enthrall and disgust -- an apt description which speaks to that part of us we often mask, the one who is fascinated by that which abhors. It speaks to the duality of our soul, the constant struggle between the ego and the id, the Apollonian and the Dionysian, order vs. chaos. The Necrophilic Landscape works in that liminal realm, and reading it reminds us of this struggle.

I didn’t like the experience of The Necrophilic Landscape, but, because of what it is and what it says, I am convinced it is something we all should read. 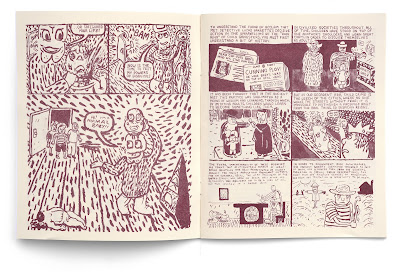 You can pick up a copy of The Necrophilic Landscape here.

HOUSES OF THE HOLY
by Caitlin Skaalrud
Published by Uncivilized Books
Available Here. 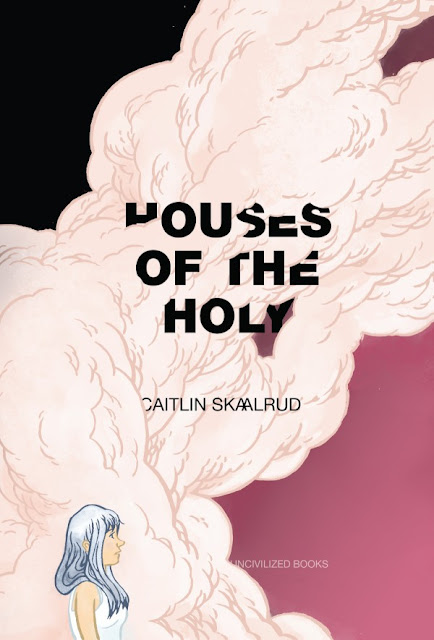 The monomyth can always be interpreted as a process of self-actualization. The descent into darkness and the struggle with the ordeal stand as metaphors for facing our fears, overcoming the lies we convince ourselves of, understanding that which we need to move on. Last year, Retrofit/Big Planet published Anne Emond’s Debbie’s Inferno which took this metaphor one step further. This year, Uncivilized Books has published Caitlin Skaalrud’s Houses of the Holy and, by doing so, has jumped into the abyss. 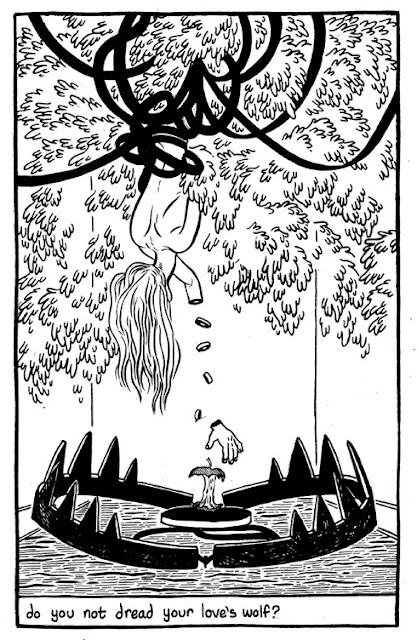 Houses of the Holy is a beautiful, horrible, unyielding, noble, and ferocious diary of self-introspection in which the narrator journeys through her pain, the damage at the heart of her psyche. Everything is alluded to in page after page of art installation metaphors laid inky thick in panels, in splashes, forcing the reader to piece together fragments into wholes that never fully gel because outside in the periphery there are still moments to be confronted.

Doors and rooms. Passageways into spaces caged, cribbed, and confined. The detritus therein to be sorted, to be feared, to be saved. Confront, process, continue -- this is potent, weighty. Houses of the Holy is not for the timid or the fearful. It is a big-handed comic that reaches for you. It can choke, it can punch, it can pull you in and caress. 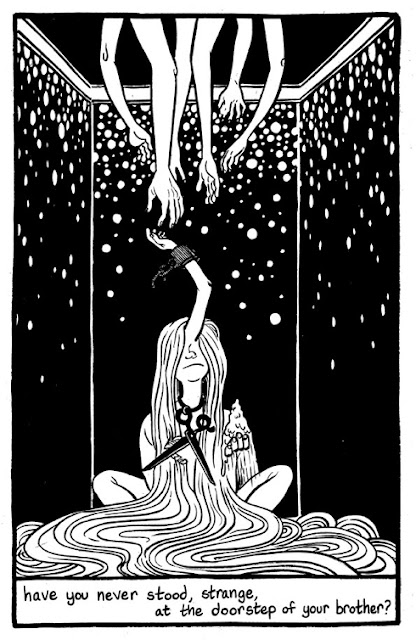 Uncivilized’s solicitation reads: “A young woman’s descent into the depths of her psyche in hopes of repairing the damage takes the form of a Dantean journey. Each stage a macabre installation of everyday objects and animals (dead and alive) arranged in occult patterns. Abandoning the false self leads her through despair, self-surrender, and an encounter with the inner void. Houses of the Holy by Caitlin Skaalrud is a nightmarish vision of a damaged psyche trying to be reborn.” 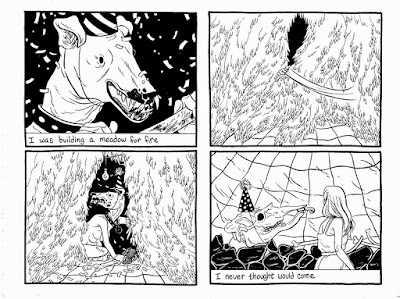 Each time I read through this book I find something new, something fascinating, horrifying, all-too real. And so I read it again, and again.

You can pick up a copy of Houses of the Holy here.