Books in Bites 5: Three Comics Worth Your Attention (SPX Special)

Quick Reviews of Three Books you may be interested in.
(note: I picked up all 3 of these books at this year’s SPX) 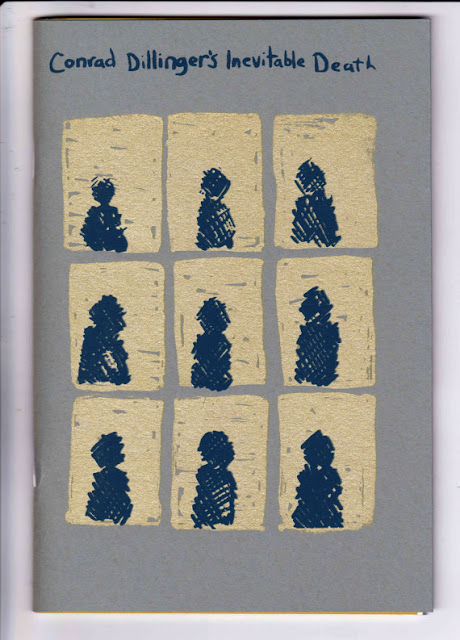 “The danger in standing paralyzed thinking about Death is giving Death the opportunity to start thinking about you.” Conrad Dillinger comes to this and other conclusions in Nick Francis Potter’s 35 page ambient existential comic called Conrad Dillinger’s Inevitable Death. It is as much a meditation on death, as it is a meditation on existence, as it is a meditation on inaction, as it is an exploration on the comics medium itself. Wrapped up in the confines of the nine panel grid, most of what is conveyed in the text is through stasis and potential rather than any formal action.


Yet in this quietness, it shouts loudly in our faces. 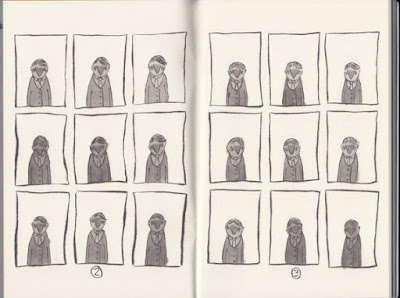 Think of Warhol’s Screen Tests. Warhol would set up his 16mm Bolex and shoot 100 feet of black and white film of his subject as they sat solidly before the camera. The longer they sat there, the more their pretenses would collapse and, by the end of the film, the audience were able to engage with the core of the individual on the screen. Potter’s presentation is of the same thrust in this book. We have Conrad Dillinger facing the reader relatively unchanged for 315 panels (35 nine panel pages), and, by the end, he is transformed both literally and figuratively. It’s contemplative and confrontational all at the same time, to the point where the panel borders themselves even begin to become part of the revelatory process. There is a claustrophobia inherent in repetition, yet Potter is able to avoid this, making the tight place of sameness seem open and expansive. 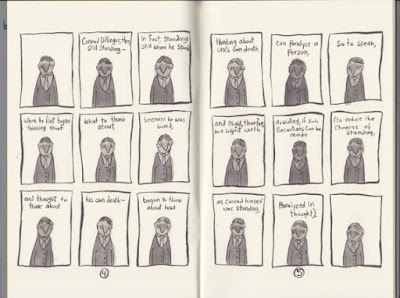 Potter is obviously experimenting here. There is a sense that he is trying to figure out how to tell a highly emotional story that features a fully realized character by placing much of the onus on the reader to fill in the blanks left unsaid in the gutters of each nine panel grid. The term “virtuoso” seems almost grandiose here, but Potter is one as much as Warhol was one, and that, of course, is the subject of both debate and interpretation. What is certain is that Potter is pushing the medium by deletion more than addition. He’s taking the epic hollering of the 9 panel page and turning it into a soft haiku that punches even harder by not swinging at all.


You can pick up a copy of Conrad Dillinger’s Inevitable Death here. 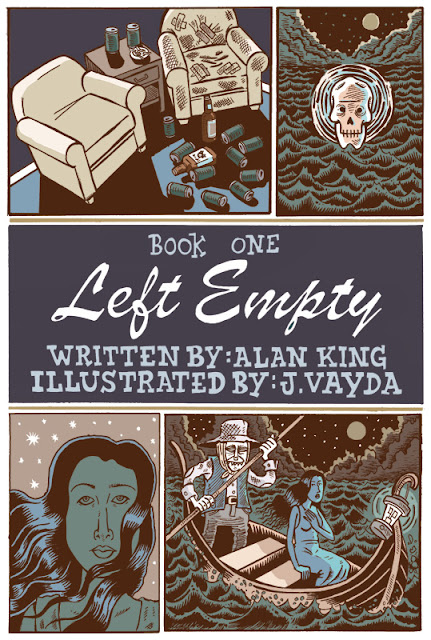 So much of Alan King and Jamie Vayda’s Left Empty undulates with the rhythm of sobbing and the weight of absence. The past collaborations between these two artists, such as The Rats Were Bad That Year and the wonderful short “The Time I Shit My Pants at a Motorhead Show" in Loud Comix #3, all seem to have been a wild spree, preparation for the nakedness of Left Empty. While this is King’s story, it is Vayda who does the majority of the storytelling. There is wrenching clarity to Vayda’s lines and choices that when King’s words do finally intrude upon the narrative, it is almost shocking.


Book One of Left Empty is a brutal tale of the after effects of loss, the regret that blankets every second guess, and the destructiveness of the abyss. King does little to paint himself as a role model and Vayda portrays the downward spiral with such visceral power that you almost smell the decay that you are witnessing in his pages. 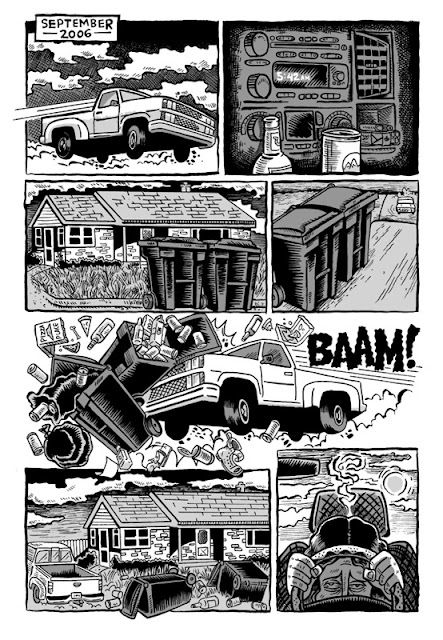 And then there are these dream sequence pages that push everything into the realm of the archetype. These pages remind us that there is horror always lurking, that chaos is the force that moves the world forward, that all of our ideas of safety and control are only an illusion, and that the only certainty is death. When she or he whom you love is forever stolen from you it is not only that person that has died. King and Vayda’s comic softly hisses this in your ear. This is not a book you give to those seeking solace or comfort. Each page hurts. 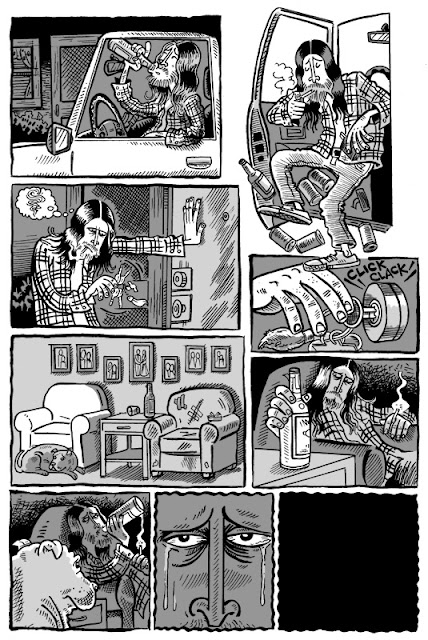 Jamie Vayda’s art has never been this crisp. Each beat is on target, every emotion conveyed, nothing is wasted. These two guys are working in tandem, playing to each other’s strengths, bringing out the best in each other. King has said of Left Empty, “It’s a story that’s not always easy to tell, but one that needs telling.” Whether it serves a cathartic need for King, or provide some sort of closure for him, I wouldn’t hazard a guess. All I can say is that we are all the better for him having taken to tell this story, and all the better for him choosing Vayda to help him do just that.


You can pick up a copy of Left Empty: Book One here. 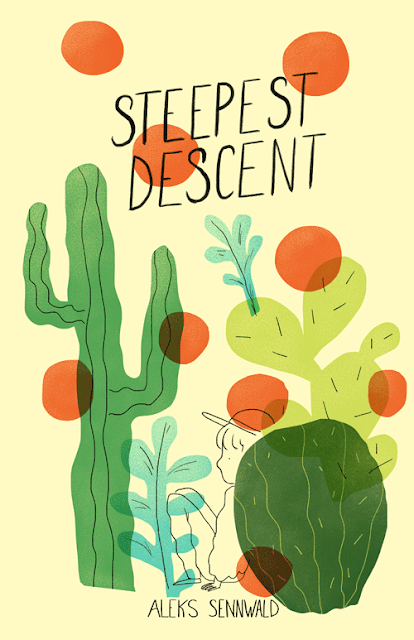 While Aleks Sennwald’s Steepest Descent has been out for nearly a year, SPX was the first time I had ever seen it. Once I did , I knew I had to have it for my collection.


The solicitation for the book reads, “In the desert, science and technology come head to head with magic and mystery as a mother and daughter attempt to bridge the gap.” It’s a vague pitch, to say the least, but it encapsulates only part of the theme Sennwald is dabbling with here. For Steepest Descent is also about the procreative power, not only that which is inherent in the biology of women, but also that which is in the mind of the dreamer and the artist. 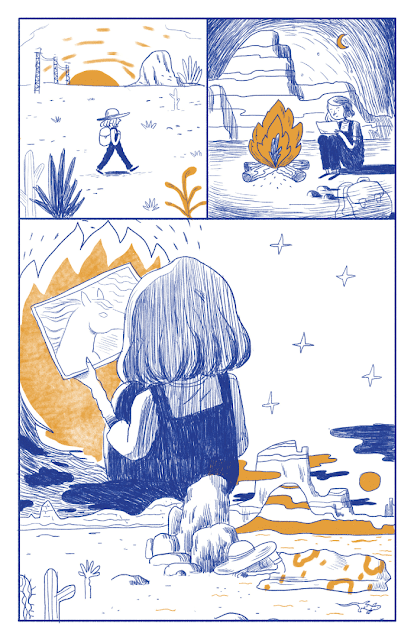 The book is celebratory in intent. It has a central conceit of creating life through destruction, as well as the whole science/magic binary dance, but it strikes me also as a book mainly about women -- their power and how threatening that can be to men. Men in this book can only steal, they cannot create. Yet it is this act of theft that provides the catalyst for the magic of the book to occur. Had I a stronger background in this type of thinking, I’m sure that there is a philosophical notion that makes sense of this seeming juxtaposition.


I’m not one to step into waters I don’t know enough about, as I’m bound to sully the system more than swim smoothly across. 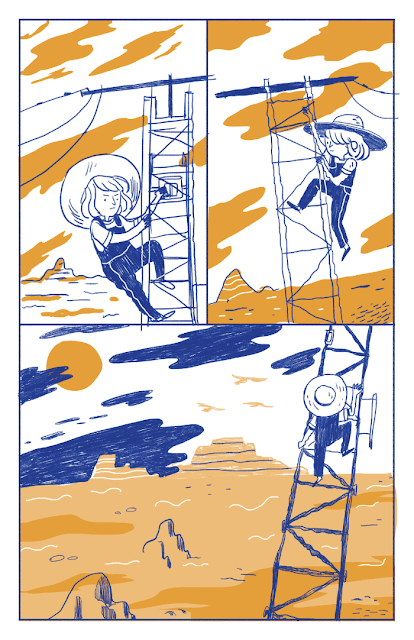 So let’s leave it at this: Steepest Descent is one of those books that you will read a number of times as each time you immerse in its pages, you rise from the depths with something new clenched between your teeth. There is power here that has been carefully crafted by Sennwald to vibrate with the imaginable. In this book, what is tragic sets the stage for something evolutionary, both here among us, and even further out into the universe.


You can pick up a copy of Steepest Descent here.