Transcendence is Beautiful: A Review of Ant Sang's DHARMA PUNKS 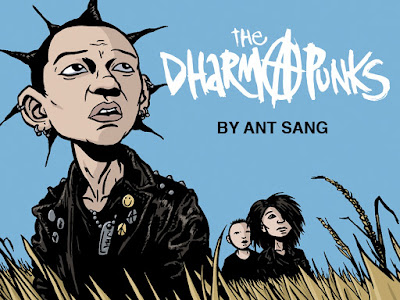 I saw the best minds of my Generation X destroyed.
-By over-indulgence.
-By desire.
-By fear.
-By too much passion about the workings of the world.

Much of the 1990s is pretty much a blur for me. I was a recent college graduate with an over-inflated ego, a labyrinthine relationship with sobriety, and a poorly scrawled map of where I was, where I was going, and I had a terrible sense of direction. All I was absolutely certain of was what I didn't want, and what I didn't want was what seemingly everybody else wanted.

The 90s may have been the decade that punk actually died, but while it was in its death throes, I clung to its ethos as tightly as I could.

I was a younger then. I had the stamina for such a thing. There was strength still in my grip.

But nothing lasts forever.

The end of the 90s found me married, a father, a home owner, and on track to a career as a High School English teacher. Punk was dead; I had become a man.

But am I a better person for such a thing?

Life is suffering. Life is an illusion. Attachment is the source of all woes. The Buddha says, “See all of this world as a star at dawn, a bubble in a stream, a flash of lightening in a summer cloud, a flickering lamp, a phantom, and a dream.”

I was just reminded of this in a comic. From 2001 to 2003, down there in New Zealand, a cartoonist named Ant Sang was releasing an eight issue series that addressed all this and more. This comic was called Dharma Punks and it was one of the most successful independent comics produced in New Zealand ever.

Then it went kinda out of print. 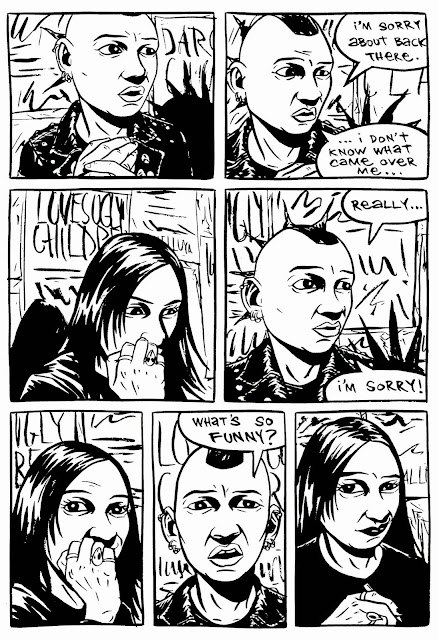 Now, thanks a successful Kickstarter, New Zealand's Earth's End Publishing has brought this series back to life. Right now the first four issues are available on Comixology with the remaining issues eventually coming out on a monthly basis. Also, Conundrum Press will have a trade paperback edition for the Canadian/American market coming out in September.

All of this is a blessing of sorts, because Ant Sang's Dharma Punks is a comic you should absolutely be reading.

The solicit for the book reads: “It's Auckland, New Zealand. October, 1994, and a group of anarchist punks have hatched a plan to sabotage the opening of a multinational - fast food restaurant (Bobo's), by blowing the building sky-high come opening time.” This is the framing device that encircles a book that looks deeply into the underpinnings of human relationships, how we communicate with each other, the intersections between the tenets of Buddhism and the spirit of punk rock, the concept of “the outsider” and “the other”, the influences of mass consumerism, and, ultimately, what it means to be human.

And it's an impressive, to say the least. It's a book that deserves a wider audience.

A matter of fact, why the hell aren't you reading it RIGHT NOW? 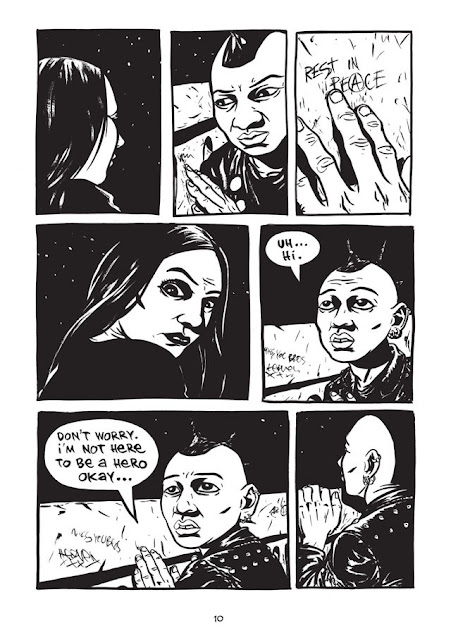 As you can see from the images I've included in this review, Sang's style is kind of like Paul Pope's in execution, but, in a way, surpasses it in terms of minutia. There's so much in the slight details of Sang's lines and panels and layouts that a reader could spend many ticks of the clock enraptured and meditative on each page. It could be overwhelming were it not for Sang's deftness of narrative beats and timing.

While Sang is working deep within a philosophical construct, at its heart Dharma Punks is a character driven story. Sang uses all sorts of temporal tricks to not only tell his story, but also to unfold motivations and emotional ballast in each one of his characters. It pulls you in as it smacks of the way we actually learn about the people in our lives. Traditional “Origin Stories” are lazy, simplistic, and false – we get to know people through layers of time, we understand them in pieces and through that, formulate the whole. Sang breathes this sort of life into Dharma Punks and thus engages his audience on a level more true to experience than narrative convenience. 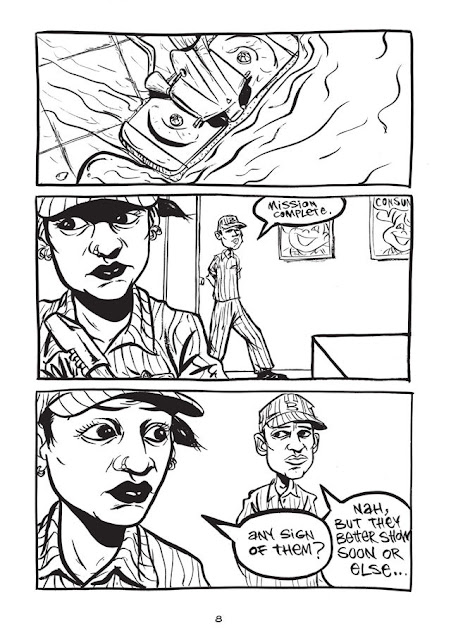 Dharma Punks is also punk as fuck. Sang gets it and through the power of his art he's able to convey so much of what made punk good, what made it transformative for the people who needed it, and how it fostered community while it idealized a hope of a better world. While so many saw punk as reactionary or nihilistic, really it was responsive to repression, hypocrisy, idiocy, and threats to the spirit. Punk was as much about hope as it was about anger -- the people in the community understood this, fostered it, and built upon it.

Sure, punk is dead now, but its beliefs and attitudes persist in all of today's struggles for social justice, equality, and the dignity of the individual. This is why books like Dharma Punks are still important and resonant, and artists like Ant Sang need to be fostered and celebrated.

Once again, you can pick up Dharma Punks on Comixology