My Continuing Crisis: Writing on CRISIS ON INFINITE EARTHS 8 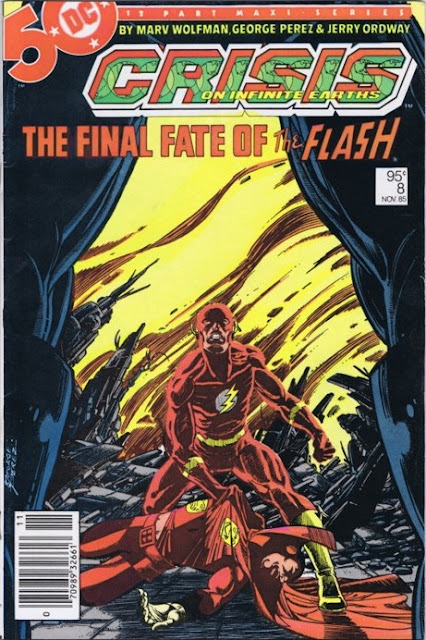 Now you’ve put me on the spot, when all I really wanted to write about in this issue was Darkseid’s use of air quotes… I really want to know more about his “certain precautions”, what it means to “cloak” instead of cloak, how his version of the “status quo” differs from mine, and what exactly is that “lesson” he means.
It’s cryptic stuff, and, by golly, I sure did want to write screeds about that.
Either that, or even take on the inclusion of a female character named Vixen — seriously — who is standing over a man she has shoved up against some console with her leg between his saying, “You’re in for the ride of your life!” — but I realize this aspect is fraught with gender politics and I’ve vowed to not enter into those debates anymore, but rather just listen to and support those who have a direct experience with such matters.
So air-quotes it was to be as A) I am a high school English teacher, so I know something about grammar and punctuation, and B) waaaaaaaaay more funny.
But now I feel robbed of this opportunity because Stack wants to raise the level of discourse and actually talk about comics criticism in general and Crisis in particular.