(Torpid Mass Hysteria): a review of Roman Muradov’s (In a Sense) Lost and Found

John Keats begins his 1818 poem Endymion with the line, “A thing of beauty is a joy forever.” The Jazz Butcher took up this theme again in their song “Forever” from their 1986 EP Conspiracy. I bring this up because Roman Muradov’s first graphic novella, (In A Sense) Lost and Found, is a thing of beauty. Therefore, assuming that Keats and The Jazz Butcher are correct, it’s going to be a joy forever.
And ever. 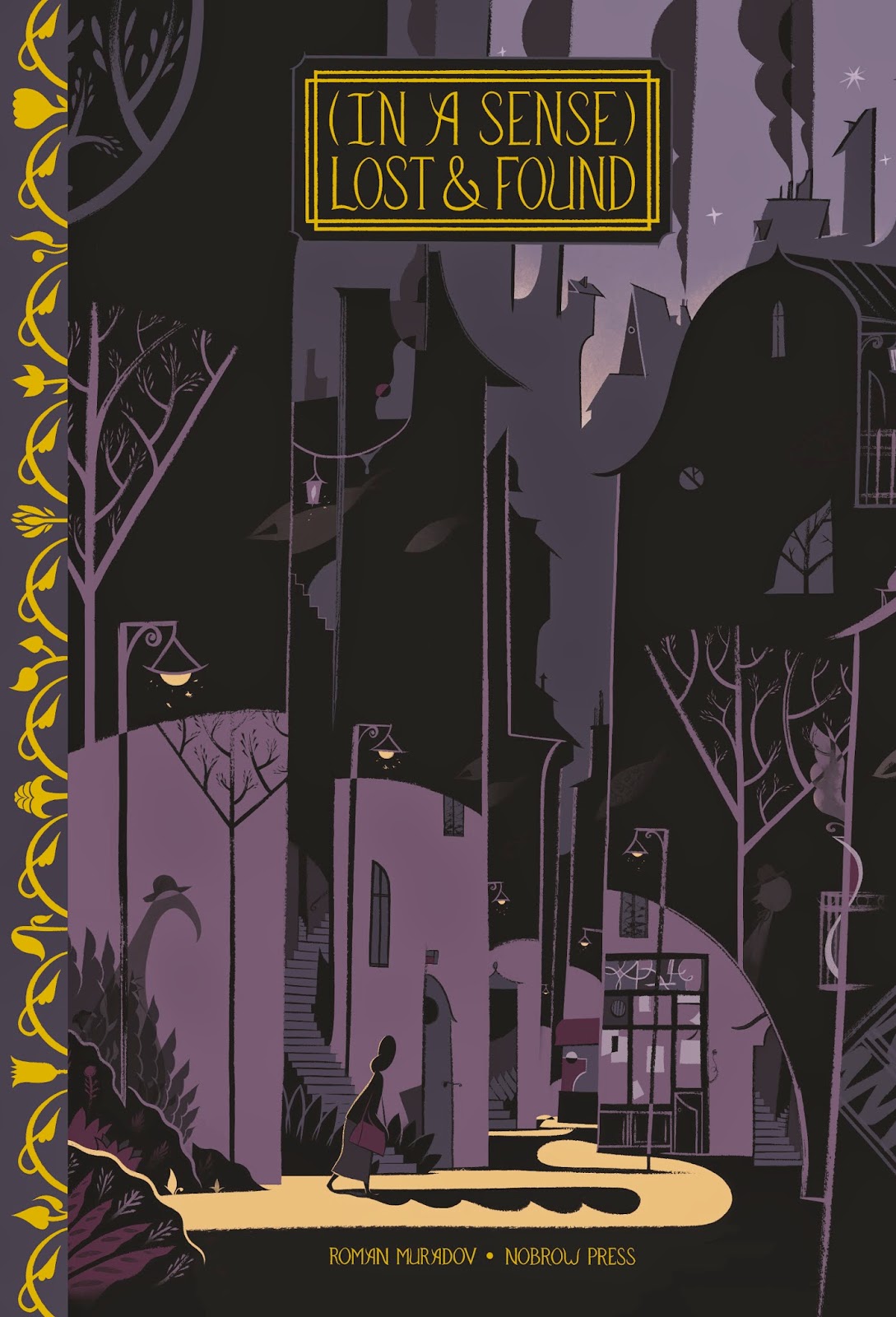 Many reviewers have already lauded this book with far more erudite praise than I could ever conjure. They use big words and long sentences to wax lyrical about Muradov’s art, design, and storytelling. The term “Kafkaesque” appears often in these reviews, as well as comparisons to the likes of Miró and Borges. They have even called (In A Sense) Lost And Found “a challenging and surreal journey steeped in hypnagogic imagery” – though to be honest, I’m not really sure what that means.
As so many beautiful words have already been written about this beautiful book, there is little left for me to do than expand on something Muradov said about the creation of (In A Sense). In an interview with Edwin Turner for the website Biblioklept, Muradov says, “… a great deal of (In A Sense) was inspired by the sudden widespread acceptance and commodification of banal nostalgia, self-expression & personal experience, which I see as a kind of torpid mass hysteria.”


“Torpid mass hysteria” – that’s good stuff, innit?
The starting point of (In A Sense) has the main character awakening “to find that her innocence had gone missing.” She sets out to find it and, I gather, reclaim it – an impossible task of course, once innocence is lost, experience keeps it forever gone. Yet Muradov’s character journeys all the same and, as these stories tend to go, she “finds” something else which sorts things out for her. In a way, it is the acceptance of the loss that allows her to move forward.
We already know this, right? The television tells us so.
Throughout her journey, she comes across all sorts of people/creatures who not only are unwilling to find a destination to their quest, but, more sinisterly, she also meets those who understand and abuse the quest itself for personal gain. Innocence is re-purposed, given “new life as affordable nostalgic novelties.” The high-end market for statues of H. R. Pufnstuf. The inevitable drool produced by the sale of the original Batmobile. TV dinner trays at Restoration Hardware. We amass and surround ourselves with the constant opportunity not to recapture our past, but wear it emblazoned on a t-shirt.

This is the “commodification of banal nostalgia” of which Muradov is speaking.  There’s the need to define the self, and the self is defined by the attitude we posture towards what we’ve lost; it’s your present-day ironic detachment to the Cabbage Patch Kid that made you cry when the dog chewed off its face way back when.
(In A Sense) also points to the reveling we do in the minutia of the day-to-day of others. The tweets and posts and snapchats that fill our attention as we all smugly point out what we are doing RIGHT NOW so that everyone is aware that I am presently sitting next to a young woman who smells vaguely of soup and this bus ride is once again interminably slow.
Because these things are important.
I cast out my experience as valid because now that you’ve read it, I am defined. Self-expression is no longer a creative act, it is a documentation. Our critical response to experience is one of Gifs and emojis, because there’s no time for reflection when the next moment may yet provide a new opportunity to Instagram.

The anxiety of pace. The freneticism of what’s next. It’s exhausting, and it claims so much more than it could ever give back. Why go looking for what is lost at all?
And maybe that’s what (In A Sense) Lost And Found tries to answer.
Muradov slows things down with his art. (In A Sense) Lost And Found is predicated on a measured read. His nine-panel grids and abstractions in both art and narration force a reader to linger, even if they don’t want to or even know how. For this alone, (In A Sense) is a thing of beauty. For this alone, it’s a joy forever. The answer to the main character’s journey is ultimately what you make of it. Muradov has ideas, certainly, but, in a sense, he’s leaving it up to you. Which is also a thing of beauty.
Joy.
Forever.
(In A Sense) Lost And Found can be found at Nobrow Press