Dispatches from CAB Part One: It’s an Adventure

Every so often the editorial staff at Comics Bulletin asks to tag along (in abstentia, of course) with our writers as they visit various points on the map to attend conventions and festivals. Like SEAL training these brave souls are given nothing to survive save their wits. No private jets. No corporate cards. And absolutely no money for alcohol or even, yes, coffee. This time two provincials, Daniel Elkin and Keith Silva, both drew the short straw and were sent to Greenpoint, the northernmost neighborhood in the borough of Brooklyn, NYC to attend Comic Arts Brooklyn. Over the next four days Comics Bulletin will publish what Elkin and Silva are calling ‘Dispatches from CAB,’ a sandwich board of sorts that promises a travelogue, reviews of comics and tips for surviving the game called comic book criticism. Enjoy! 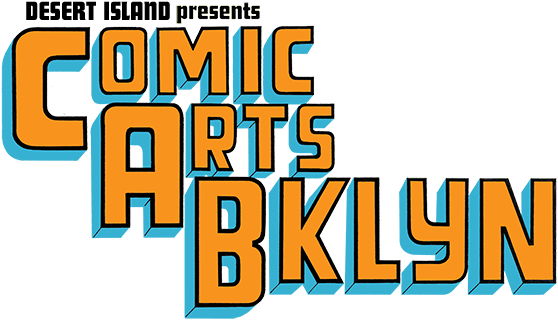 KEITH SILVA: As late autumn sunshine broke over the borough of Brooklyn and made the maples along Union St. into a riot of golds and aureolins, I knew my rumored-to-be interminable wait for the G would be tempered. On the burnt umber stoops of brownstones and between the curling wrought-iron fence spaces, jack-o-lanterns mouldered. I turned onto 6th Ave., headed towards Prospect St., on my way to meet my friend Daniel Elkin. We were bound for Greenpoint and Comic Arts Brooklyn.
I met Elkin, in-person, for the first time, the night before. Our time spent in conversation over beers at Dizzy’s confirmed for me what was obvious from the thousands of words he and I have written together for Comics Bulletin in the last two years; Elkin is a friend for life. If that sounds too squishy or sentimental, I agree, but it’s true. At forty-one, I’m still coming to terms with how it is I’ve developed deeply felt relationships with people whom I’ve never met in-person. Lennon was right, “strange days indeed, most peculiar mama.”
The G turned up sooner than expected (I guess?). As we rode the rails, we picked up our conversation where it had been left the night before, except now it was spiked with in-jokes like ‘user-narratives,’ ‘Matt Dillon,’ and ‘pal’ after a night spent on the West Side eating the best dumplings NYC has to offer (or so I was told) with a few F.O.Es or Friends of Elkin’s. I can confirm New York City apartments, even the ones with exclusive addresses, play small, which made getting to know my fellow F.O.Es easy. What’s up, pal?

Comic Arts Brooklyn is a free event held at the rec. center attached to Our Lady of Mount Carmel Church. Later in the day, a wedding was held in the Church proper. The show is divided up between two floors. The current CYO basketball practice schedule at the entrance to the top floor made me feel like I was twelve and walking into the gymnasium of Taunton Catholic Middle School. I was home.
My limited con (and fest) experience makes me feel like I’m eating at a Vegas-style buffet for the first time; I want to grab everything I see as soon as I see it and pile up my plate as I fret I’ll never get to try the steamship round of roast beef (which in Brooklyn, would, I’m sure, be locally sourced) from the carving station if I don’t take it now. So, yeah, I’m lousy at these sorts of things. I need to learn to relax. Missed opportunities abound, I’m sure, as I browse from table to table like a sailor on shore leave.
With TCAF as my only barometer, I’ve learned one thing: at these gatherings of the tribe, the comics are circumstantial. Be it con, fest or fair, it’s about the people not the products. I’ll enjoy the books I bought for a long time to come, but my memories of the people I met will last forever.
Standing at the Nobrow table talking with Tucker Stone and hearing his acid wit firsthand corroborates his authenticity as a smart critic, sly observer of all things comics and his love for Paul Pope. CAB also afforded me the privilege of some future date when I’ll say, “I once met Michel Fiffe.” As he shook my hand, Fiffe said he was a bit unfocused at the moment, he had just been handed a comic and was more interested in reading that than selling his own comics, Copra and Zegas. Disarming, humble and apologetic, Fiffe, ironically, would never cut it on COPRA, the comic about the Suicide Squad-type team of mercenaries he’s created.  Now that’s someone who loves comics and, yes, he is a true legend in the making.

While having been charmed by Alexander into buying porn, I had received a text from Elkin. It simply said: “DVG at Unciv table, where you” and so I headed upstairs. My CAB adventure was about to change and yet stay the same.
DANIEL ELKIN: But that’s a story for later, yes? Because, as the motto for the weekend at CAB was, “It’s an adventure,” and all adventures start from a single step.
Mine began with a red-eye flight from California, which found me delirious in the Cleveland airport (strangely apt for Cleveland), and then whisked away by an old college friend through the rainy streets of Brooklyn; an art opening in Chelsea; a later reunion with a friend from Texas over delicious sandwiches (natch), Arrogant Bastards, and thick conversations about criticism and faith at Bierkraft in Park Slope; and then, finally, the firm handshake of Keith Silva, who is, yes, a real person. One of the realist people I know – incomparable, nonpareil.
People are important. While we dabble at interaction here on the internet, nothing will ever compare to looking someone in the eye and knowing they know you as much as you know them, you know? Isolation is the default nowadays as our social platforms make us casual in our connections. Being out in the world takes effort, and I’ll rattle the heavens with my shout that palling around with people who matter is worth the push for every reason you can consider.
Every single one.
And so it is with these festivals/conventions/ gatherings whatever, Silva. Yes, Comic Arts Brooklyn was about comics – and oh, what comics there were – but it was also about people, as you have already said.
For me, much of my few hours at Mount Carmel Church could be characterized, amusingly enough, by awkward social interactions. From starting my conversation with Eye of the Majestic Creature creator Leslie Stein with, “Wow, you look bored,” to saying to Josh Bayer as he hurriedly unpacked his books thirty minutes after the show began, “Nothing like being late to your own party,” to standing in front of Julia Gfrörer trying to think of something clever to say, failing, and thus saying nothing at all. All this cementing my place as comics’ own inadvertent asshole. I’m sorry.

But then, of course, there are the moments that linger for such better reasons. Chatting with Sean Ford about his amazing series Shadow Hills; encouraging Cody Pickrodt to keep making Reptile Museum (50 issues! Are you kidding me?); turning the pages of the transcendentally beautiful and gigantic Little Nemo: Dream Another Dream from Locust Moon Press while talking process, potential, and how to con my girlfriend into buying me this for Christmas (I’m still drooling thinking of all those huge, winsome and comely pages); and laughing with Roman Muradov about Julian Barns – this is connecting, these are people as much as they are creators, and that matters. You come for the comics, you stay for the people. We shake hands and acknowledge each other. It’s important. We are human. “Only connect!”
And then I send Silva that text, “DVG at Unciv table, where you?” and the process that had begun with those human handshakes expands to encompass so much more…