As Part of the Inaugural SCHLOCK AND AWE column on Comics Bulletin, Paul Brian McCoy asked a few of us writers if we could whip up something about the recently departed Karen Black.

This is what I wrote: 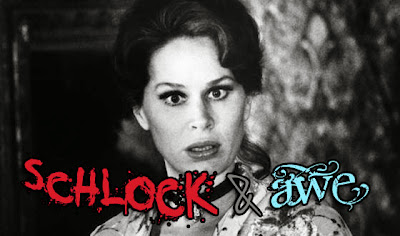 They say the eyes are the window to the soul. She's got Bettie Davis Eyes? The Eyes of Laura Mars? Screw that. Give me the eyes of Karen Black, for within those light green, slightly askew peepers rests all of our salvation. What Karen Black saw was a way out of our troubles. What Karen Black saw was our sin's forgiveness.
In October of 1974, I had what some may call a spiritual awakening. It happened in a dark theater in Dallas, Texas. I was seven years old.
Nixon had only just resigned as President of the United States. As a country, our wounds were deep and, like so many other pre-teens of my generation, I was rudderless, unabashed, and looking to fill my brain with as much plastic jelly they could give me to shove in there. Left to my own devices, I would have sat quietly in the living room, staring at the television sucking deep from the goodness that was Land of the Lost, Shazam!, and Hong Kong Phooey, but my parents insisted that we go to the movies.


See, at that time as a country, we were all dressed in disaster gear. The utopian dreams of the late 60's had been churned through the blender of amphetamines, mass marketing, and exhaustion. We had thick talking enemies with nuclear capabilities and our leaders were more drunk and paranoid than Roky Erickson had ever been, even before his stint in the Houston psychiatric hospital, even when he was playing Two Headed Dog with The Aliens. We were groping for sunlight, a way out of the fire, and waiting for the hero to wrap a blanket around our shoulders and telling us everything would be fine, now.
Now.

Airport 1975 was a disaster movie. They were popular at the time. Actually, it was a disaster avoided movie, for though horror upon horror was heaped on our heroes, in the end they had to persevere. Someone got to wrap a blanket around their shoulders and tell them everything would be fine, now.
NOW!
We needed this message then as much as we need it now, and its avatars at the time were the eyes of Karen Black. Awry, askance, cockeyed, catawumpus, her eyes honed it on a new vision of the future. There's a hole in the plane, the auto-pilot is failing, and we're headed as quickly towards a mountain as we are a fiery death. BOOM!
But Karen Black saw another way through and she grabs control of the plane's descent and flies embracing Elvis' If I Can Dream admonition from the '68 Comeback Special:
We're lost in a cloud
With too much rain
We're trapped in a world
That's troubled with pain
But as long as a man
Has the strength to dream
He can redeem his soul and fly
– and oh, how she flies!
Except she doesn't, really. Airport 1975 is a horribly misogynistic film. A gun-toting Moses has to step from the sky through the hole to save them; Karen Black move aside and let Charlton Heston fly this fucker.
Through Karen Black's eyes, though, she could see a new runway over the mountains to a land of plenty and peace. It was a vision we craved and deserved, but, of course, they stomped in as they do, put on our blinders, and set us down back where we were all along.
I understood all of this at the time. It is only now – now that the eyes of Karen Black have shut for eternity – that I can put this understanding into words.
Oh, Karen Black – the things you saw with your eyes. The places you envisioned as you stared askew into the void. We are but Google Glass to your keen apperception.