In these economic times, finding inexpensive entertainment is difficult. Thank goodness for the local comic shop and a slew of comics nobody cares about anymore! Each week Daniel Elkin heads on out to Empire Comics Vault in Sacramento, CA and grabs a comic from the bargain bin (for 25 cents) to see what kind of bang he can get for his solid quarter. These are those tales. 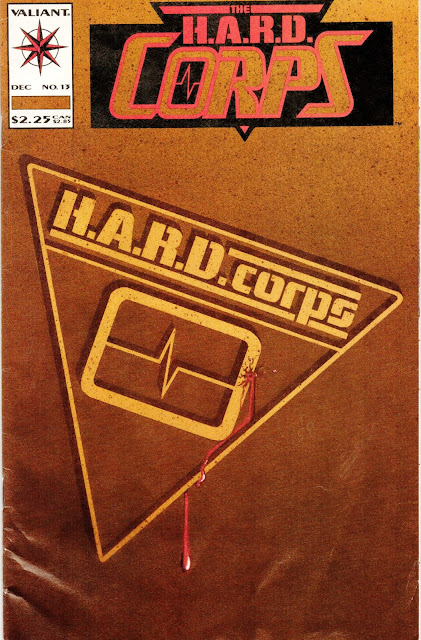 YOU WERE A PUTZ – BUT YOU WERE OUR PUTZ!

December of 1993 brought us NAFTA, id Software's Doom, Wayne's World 2, Schindler's List, and the album Lethal Injection by Ice Cube. It saw the re-election of Omar Bongo as President of Gabon, and the death of the legendary Frank Zappa.

December of 1993 also brought us the publication of The H.A.R.D. Corps #13 from Valiant Comics.

It's an old adage that you shouldn't judge a book by its cover. That's hard to do sometimes with comic books. My initial reaction to this cover was something along the lines of …. mmmm … OK ... Brown.

Not really a lot of dynamism here, nor any particular eye-catching wonk to inspire an impulse purchase. A matter of fact, this cover is kinda off-putting, kinda icky, kinda “what were they thinking”. I mean comic books are, in part, a strong visual medium and, in a sea of titles, it behooves the publishers to use the cover of their book to make it stand out. Even though brown may possibly be the most beautiful color in existence, I don't quite see how this cover does that. I'm sure the marketing department at Valiant had loads of words they used to justify this decision. But brown? Then again, it works for Cleveland.

Let's just jump in, shall we? 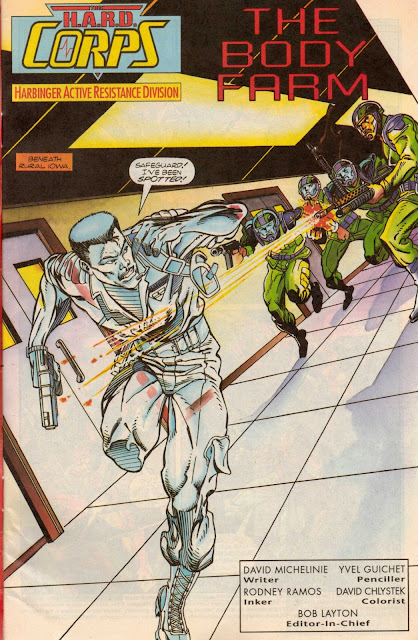 So the subtitle of this book is “The Body Farm” – I think that should have been highlighted somewhere on the cover. Talk about raising interest – a whole farm dedicated to raising Bodies? I want to know a little more about that.

Anyway, there's this white guy. From the art, I can't tell if he is missing a leg or just running. Regardless, he is being shot at. The bullets seem to be passing through him. At this moment, he realizes that he has been “spotted.”

The white guy is named Mr. Kim, and he is talking through his headset to some lady sitting in front of a bunch of computer screens. She is able to switch his “cerebral implant” to change the super powers that he manifests. He wants to change from Ghost Mode to Airborne so he can fly out of his current situation. Unfortunately by shifting out of Ghost Mode things no longer pass through him.

Now Mr. Kim is vulnerable. It is at this moment that this huge guy pulls an “OH YEA!” Kool-Aid Man and bursts through the wall behind Kim.

Well what would you do?

He shoots him in the nuts. 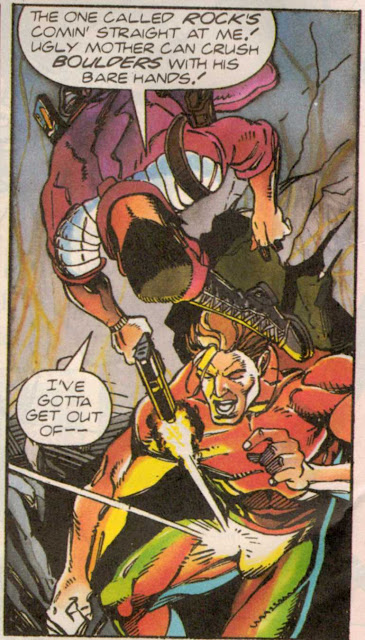 I guess that's why this guy's name is Rocks.

So Rocks knocks Kim unconscious and then stomps his headset.

The comic then quick cuts to “A corporate jet 30,000 feet above the Mississippi River” (which, as far as specificity, leaves much to be desired) where it goes and does some character and plot development. Here we meet the rest of The H.A.R.D.Corps. Apparently, team member Superstar made a mistake by “trying to electocute (himself) while on Inulnerability Mode, (he) short-circuited systems (they) were using to track a very DANGEROUS man!” Such a thing seems to be enough, or the final straw, or something, for him to be suspended from the Corps.

Superstar explains that while every member of the the Corps should be equal (as they all had been brought out of an “irreversible coma by brain implants” – truly the great equalizer), he is different. While they all could get on with their lives, Superstar, by the very nature of him being a famous actor before his accident, “can't go anywhere, do anything, without wearing some sort of disguise!” This fact has bunged him up so much that he says that “the only time (he) feel(s) alive – is when (he's) cheating death!” He even raises both arms in the air and tilts his head back when saying this.

It's H.A.R.D. to be Superstar. Then again, this sounds like a Bieber problem to me, and I find it a little H.A.R.D. to commiserate. But it is revelatory of character motivation, which is nice, and is an attempt (however feeble) to make Superstar sympathetic, which adds to the impact of what happens later in the book.

Apparently, though, Superstar is not the only one with “back from the dead” issues. Another Corps member, Charles Palmer, a.k.a Gunslinger, has been “watching her again” which sounds all kinds of creepy. Especially when he claims, “It's not a problem”.

Anyway, the Corps is informed that Kim has been captured. This is really an issue because company policy dictates that “If a Corps member is captured, self-destruct circuits are to be activated to melt power implants before our technology can fall into enemy hands.” In other words, they're gunna fry his brain. Which would suck for Kim.

Got to love the use of the passive voice in the company policy, by the way.

Anyway, the rest of the Corps go all Black Hawk Down and refuse to leave a man behind. They make plans to rescue Kim.

Speaking of Kim, the comic then cuts back to him. He's a prisoner on the farm. And it ain't Maggie's (They say sing while you slave and I just get bored), it's “The Body Farm”. 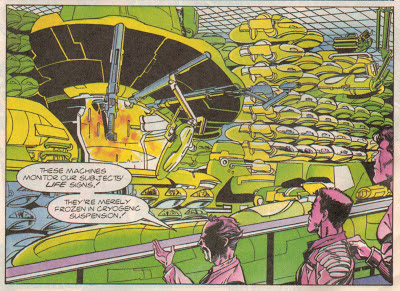 This farm is run by the Harbinger Foundation to help accelerate the development of Harbingers (those with super powers). It does this by finding people with the genetic disposition to produce Harbinger babies. The foundation has wiped the minds of these people, kept them in cryogenic suspension, and has made plans to reanimate them in a newly built town where they will be monitored to “determine which societal and environmental factors might play a roll in accelerating Harbinger development.”

After this revelation, there is the BREET BREET of the Intruder Alert, signaling the arrival of the Corps!

The H.A.R.D.Corps comes in all hard core, guns a'blazing and powers a'waving, but when Corp member Hammerhead tries to use his Arc Charge power, it fizzles. Why? Because down on the Body Farm, there are other super powered folk. The Corps fights its way to the lab where scientists are about to lobotomize Kim. Rock is there to serve as the hard place between the Corp and Kim, but Superstar, all jacked up on being Invulnerable, goes for the scissor move. 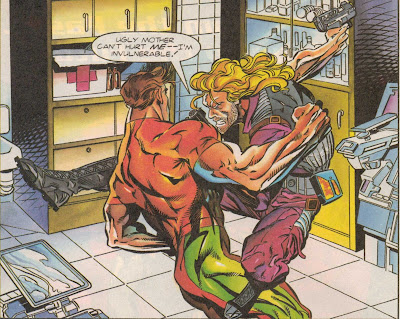 Having rescued Kim, the Corp goes on evac mode, but they get pinned down by a bunch of goons with guns in green. Superstar, still all revved in Invulnerable mode, tells them to head for the chopper as he starts putting an enormous number of bullets into the goons. 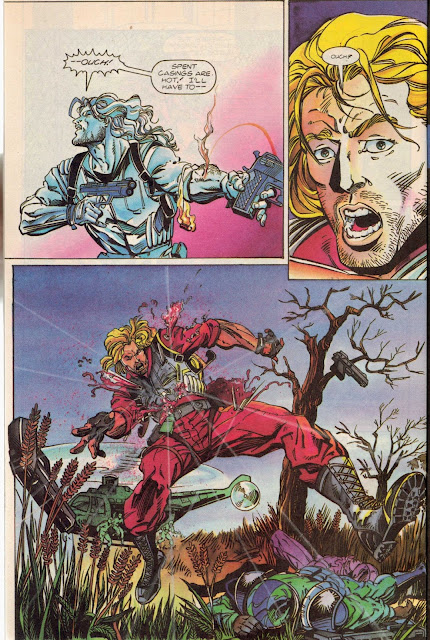 Which is followed by strict adherence to company policy 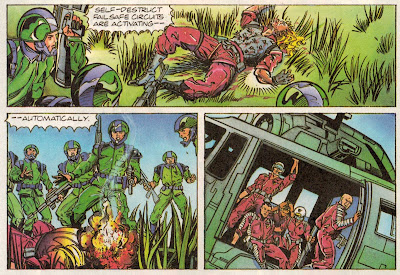 The irony of having Superstar's face blown off given his earlier complaint is not lost on me. In a way, it kind of elevates this comic from just a regular old whatever to something mildly special. It's good like that.

Anyway, the Corps return to base, throw Superstar's TV show (Hard to Mangle – heh) on the VCR, and raise a toast to his memory.

When I die, would someone please say this at my wake? It is really how I want to be remembered.

Anyway, there's another page about the Corp being put on ice until it is determined what went wrong, and them questioning whether they still want to work for the organization they work for.

That's how things go, I guess. Blow the face off a Superstar, start thinking about contract renegotiation.

It's the modern age.

Well, from Brown cover to scrotal bullets to scissor sisters to exploding faces, The H.A.R.D.Corps #13 certainly was full of stuff, wasn't it? And you know what? For fifty cents, I expect my entertainment to be full of stuff.

So thank you, The H.A.R.D.Corps #13 for your stuff.... and stuff. You've proved once again that anything is possible in the bargain bin. Even Superstars.

See you next month.