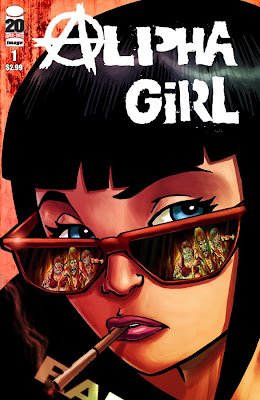 I really don't know what to make of Alpha Girl #1. I think that's because it doesn't seem to know what to make of itself either. Ostensibly it's another “tough girl survivor of the Zombie Apocalypse” tale, and the background of the lead character in this book is certainly harsh enough to make you believe that, were there to be a Zombie Apocalypse, she would be one of the survivors. But it's also got this over-the-top forced “wackiness” aspect to it that is trying really, really hard to make you laugh – too hard, in fact. For me, the juxtaposition of the gritty and the goofy in this comic only detracts one from the other because neither of these aspects is strong enough to stand on its own.

The book is set in 1984, when a third rate cosmetics company creates a product that turns women into zombies. It's up to Judith, our 17-year-old hero, to … I don't know … save the world or something? This is not really made clear in this first issue. A matter of fact, other than smoking cigarettes while narrating the story of the cosmetic company's zombie byproducts and her own backstory, Alpha Girl doesn't really do much of anything in this first issue.

I guess the story is building up to something. Image has been pimping the book as the “action-packed gore fest that you've been waiting for!” I don't really see that. The whole issue sort of struck me as a Chew knock-off, where Chew is like The Replacements and Alpha Girl is like Chris Mars' solo career. It's just not the same. It's trying real hard to capture the sound of success, but in doing so, only shows it can barely keep a beat. 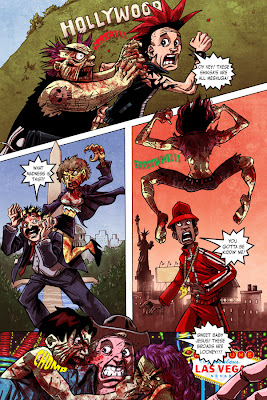 There is certainly room for this story to grow. It sets up some questions that have some interesting answers the comic could pursue, such as why only women get turned into zombies, why does Judith not get turned into a zombie, and, if the Zombie Apocalypse occurs in 1984, how are we reading about it in 2012?

It's not that I hated Alpha Girl #1 – it just really didn't do anything for me. If I want to read this type of book, I'd much rather be reading Chew or Skullkickers, which are both far more successful than Alpha Girl #1 is in combining action and humor. Still, Image seems to be behind this title and they've been doing pretty well lately, so maybe they know more than I.

All in all, I still don't really know what to make of Alpha Girl #1. That's something, isn't it?