Let's Meet: ELF WITH A GUN 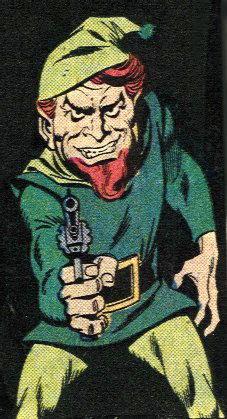 Elf with a Gun
From Wikipedia, the free encyclopedia
Elf with a Gun is a fictional character in the Marvel Universe. The Elf first appeared in Defenders #25 (July 1975), and was created bySteve Gerber and Sal Buscema.

The Elf received an entry in the All-New Official Handbook of the Marvel Universe A-Z #4 (2006).


Fictional character biography:
The Elf with a Gun is a small humanoid who commits murders for no apparent reason. The elf first appears in Defenders, killing Tom and Linda Pritchett.[1] Over a series of issues, he kills Charles Lester and his spouse in Las Vegas[2], Stu and his girlfriend at the Grand Canyon[3], and a woman hiding from the Hulk in the bathroom.[4]

He seemingly meets his end outside a house (owned by Nighthawk) in upstate New York. Preparing to kill a newspaper delivery boy named Greg, and his dog, Elf with a Gun is run over and killed by a Mac Ray moving truck. Greg notices nothing.[5]

The Elf finds himself in the 'Land of the Lost', a realm where iconic characters re-live the sixties. He encounters the rock band KISS but does not kill them, only pretends to. He gives them valuable information so the band members can make their way back home. One member, Starchild, wishes for the Elf to be hit by a truck.[6]

After Nighthawk dies, his friend and Nurse Luann Bloom suspects the Defenders were involved in his death. She follows a lead but meets the Elf instead, they go on to meet cosmic entities. Luann is revealed as a robotic 'Time Buoy', which she later denies.[7]

An Elf was also the one to reveal to the original Defenders – the Hulk, the Silver Surfer, Doctor Strange, and Namor – that they would be the cause of the Earth's destruction if they continued to work together. Thus, the four agreed to never work together again as the Defenders and quit the original team.[8] This claim is later revealed to have been a hoax.[9]

Another elf shows up, claiming to be Relf, the nephew of the original Elf, named Melf.[10]


Even more on ELF WITH A GUN can be found here.