Watch This Movie - A FAMILY UNDERTAKING

A Family Undertaking is a documentary that examines the home funeral movement while also casting an unblinking eye on how Americans deal with death.

Though we seem to revel in sleaze and the foibles of others, when it really comes down to it, we want a certain whitewashing of the truisms of life. The biggest one of these is the fact that sooner or later everyone we love is going to die. It’s not something we like to think about, and this denial has made people’s deaths one of the most unplanned for eventualities in their lives.

Thankfully, we have a booming funeral industry to take care of us during these times. Professionals swoop in, dross up our loved ones, and run us through an often times impersonal ceremony in order to provide some sense of closure. Today, an average memorial and interment costs as much as $7,000.

As director Elizabeth Westrate says in an interview about her film,


When a death in the family occurs, most of us hand things over to strangers so that we can put the experience behind us as quickly and efficiently as possible. By doing so, I have come to understand, we miss an essential opportunity for intimacy and healing. While the financial benefit of home death care is significant, it quickly became clear to me that it not the most compelling reason that a family might consider this option.

This is certainly a film with a particular point of view. To make its case for the home funeral movement, it not only extols its virtues, but also glaringly contrasts it with the funeral industry, most notably by visiting the annual Funeral Industry Convention, which is all about achieving success in the marketplace.

In its quest to prove the legitimacy of its subject the documentary reminds the viewer that home funerals were the norm for most of pre-twentieth century America.

Maybe you read As I Lay Dying by William Faulkner?

If not, you should. It is one of the great American novels.

It was the Civil War that led to the rise of the funeral industry. Families wanted the bodies of their loved ones back home after they had been killed in battle in far off places. This led to advances in body preservation and sanitizing the bodies for viewing. As morticians positioned themselves to make profits, more and more people were willing to abdicate control over the process until it eventually became the norm. 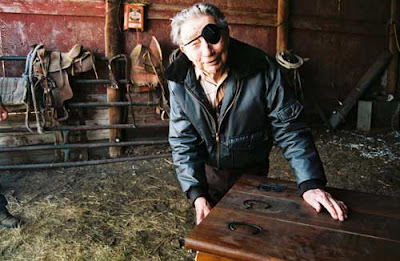 Westrate spent four years producing this film. She was lucky enough to get in contact with a few families preparing for the death of their loved ones and planning on having a home funeral. Watching Dwight Caswell deal with the death of his wife Anne is heart wrenching, but the home funeral gives him an obvious sense of peace and understanding of his loss. It is the Carr family of South Dakota, though, that really frames the film. With footage and interviews, the audience gets a sense of who 90 year old Bernard Carr is, and then, after he dies, are able to really understand what the home funeral experience is like for his family.

The film also gives a voice to home funeral guides, who are sort of midwives in reverse. One of them, Nancy Poer, is quick to say that “home funerals aren’t for everyone,” while explaining what the experience can offer. She makes a good case for why a home funeral is a viable option for some families.

The film is part of PBS’ POV series, one of the best documentary series going. It raises some interesting questions about our understanding of death, the industrialization of so much of our lives, and how we mark important moments in our lives. The film does have its flaws, but overall the topic and the families filmed hold the movie together.

"The home funeral movement challenges us to re-examine our attitudes toward death," says director Westrate. "We will all face death sooner or later; it's one of life's most defining moments, yet it's the one we typically prepare for least. I wanted to explore this movement and its growing impact on our culture of denial."