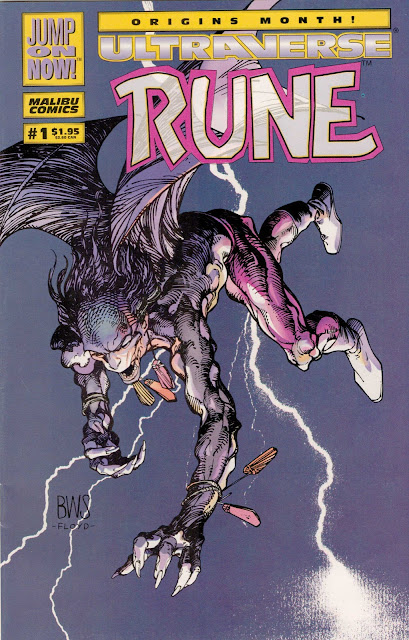 SOMETHING FROM MY DREAMS KILLED MY DAD!
I can't begin to tell you how excited I was in January of 1994 when I found out that NBC was going to debut The Cosby Mysteries. I can't tell you that because... well.... I wasn't excited. I could care less. Nobody else could either. It only lasted one season.

But January, 1994 wasn't all about Cosby. No siree. This was when NAFTA was established, when Tonya Harding got her ex-husband to club Nancy Kerrigan in the knee, when Shannon Faulker became the first woman to attend The Citadel, and when Lorena Bobbitt was found not guilty by reason of insanity for cutting off her husband's willy.

House Party 3 and Cabin Boy were released into movie theaters. The Meat Puppets released Too High to Die.

It also saw the release of Malibu Comics' Rune #1, part of the hard-pimping marketing campaign of their Ultraverse line. 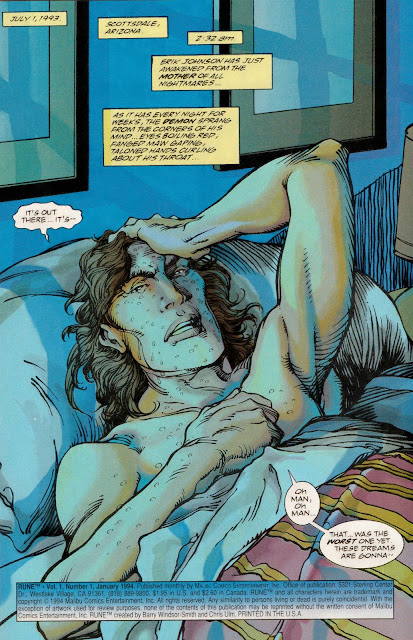 Rune #1 opens in Scottsdale, Arizona at 2:32 am with a long-haired gentleman covered in sweat (giving new meaning to the term Splash Page). This sweaty hippie is none other than Erik Johnson, who has just awoke from the "Monster of all nightmares" about a demon trying to kill him.

Which then, of course, happens on the next two pages. 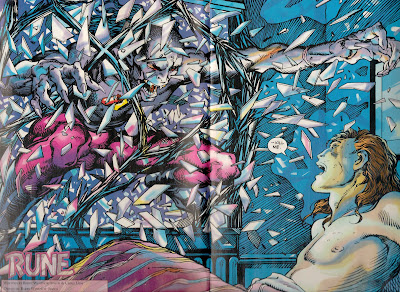 This demon is out for blood. It wants Erik's "sweet nectar of life eternal." It is also ugly.

Erik's mom and dad knock first (how respectful of them) and then burst into the room to help their son, which begs the question how old Erik actually is. But this doesn't matter, because this demon decides to eat Dad's face – literally.

Erik tries to stop him, and weird things (well... weirder) start to happen. 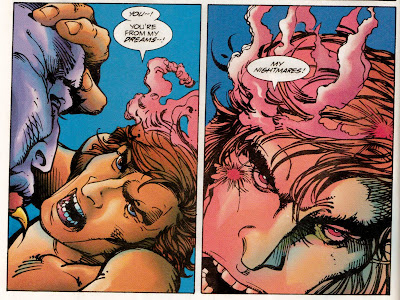 Using this new found power, Erik is able to defenestrate the demon, sending it careening through the night sky just as the police arrive. But they're not really police, see. They seem to be working for some secret agency or something.

DISCLAIMER: In the spirit of honesty, I have to admit that Rune #1 confused the heck out of me, which is making it very hard for me to write this column. Living in this state of bewilderment is, at best, an uncomfortable place for me, and I find that it is severely handicapping my ability to produce coherent thoughts. It is my assertion that, even though I find this comic intriguing and a captivating introduction to what may be a very interesting series, my current mental disorientation is seriously impacting my ability to convey any sort of enthusiasm. I apologize for this.

Erik and mom try to come to terms with the demonic invasion they have just witnessed. 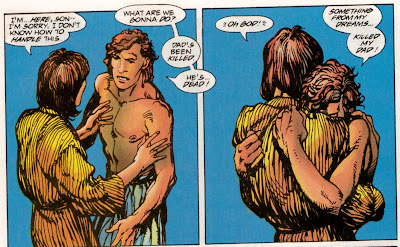 Is Erik claiming responsibility for this? He does say, "Something from my dreams killed my dad,” after all. Does Erik have the sense that his new ruby abilities are the true source of this this tragedy, making it patricide?


I DON'T KNOW!
The comic then goes into all this stuff that really starts to bend my conceptions of what is going on. There's some sort of coded transmission to someone from someone else about the incident between Erik and the demon. The police who are not police are bagging up Erik's dad, and it turns out that Erik's dad is not actually Erik's dad, but rather a "Biocon" which I think is some sort of cyborg or something.


I DON'T KNOW!
While the police who are not the police are questioning Erik and his mother, mom seems to be denying what has occurred. Then some guys in trench coats are at the site of the demon's landing and start pulling some Jedi mind-tricks on a guy with a flashlight.

And then the world goes yellow? 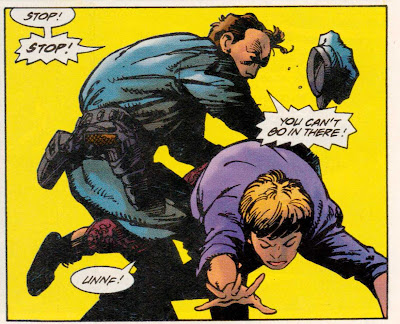 And then, my brain shuts down entirely.

We are back in Erik's kitchen and the police who are not police have tackled Markie, Erik's girlfriend, who seems to hate police (with apparently good reason after the whole knee to the groin moment above), and has no idea what is going on.

She also seems to have suffered a stroke somewhere along the way.

I know Barry Windsor-Smith is an accomplished comic book artist. I think he was just having an off day when he drew this close-up of Markie. Or maybe he had just finished reading the script of Rune #1 and he was suffering from the same sort of brain atrophy I am currently experiencing and it started influencing his art. This would make sense, as I, too, am starting to feel a certain numbness in the right side of my face.

Anyway, the comic cuts to some lab where the demon has been moved (notice my intentional use of the passive voice in this sentence, as I have no idea how the demon ended up here). Some incorporeal voice named Genie is having a conversation with this pretty cool looking chopped up guy named General Rayder. The conversation is about the demon and its origins. Genie has surmised that the demon is actually an alien, but is unable to "probe" it thoroughly due to some sort of interference. 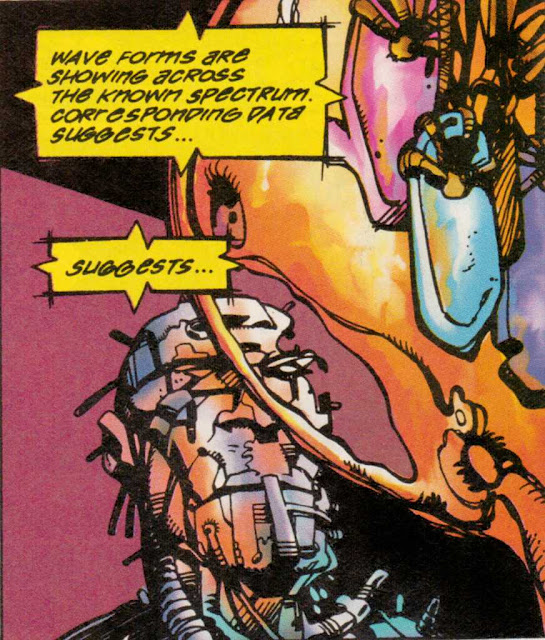 The demon is also wearing a jeweled necklace. The necklace is putting out some mojo which may be the source of Genie's problems with probing. There is a "disruption" in her "fields."

I feel her pain.

Back in Erik's kitchen, the police who are not police get the word that they have have to bring Erik, mom, and Markie someplace. Markie makes the astute observation that this whole process "blows". She will repeat this cognizance later.


I DON'T KNOW WHY!
Back at the lab, the General and Genie are continuing to try to interface with the demon. The "assimilation process" has led to this: 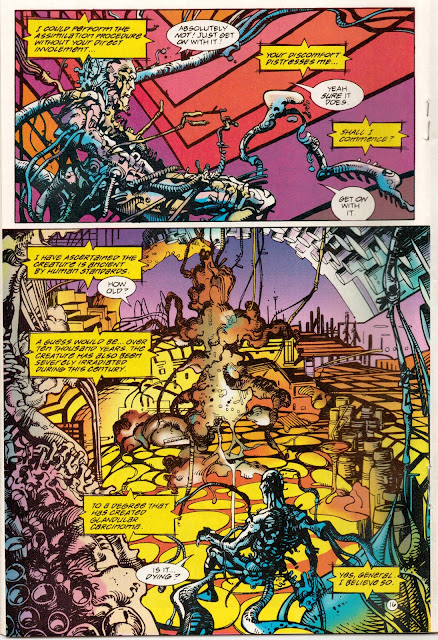 Whatever "this" is. Are we supposed to be looking at the demon's home planet? Is this the interior of the demon's brain? Is this just another part of the laboratory? I'm kinda lost here (or should I say MORE lost).

Finally, the General tells Genie to "assimilate" the demon. Genie connects some "internal probes" – never a pleasant procedure – and the process begins with this great splash page: 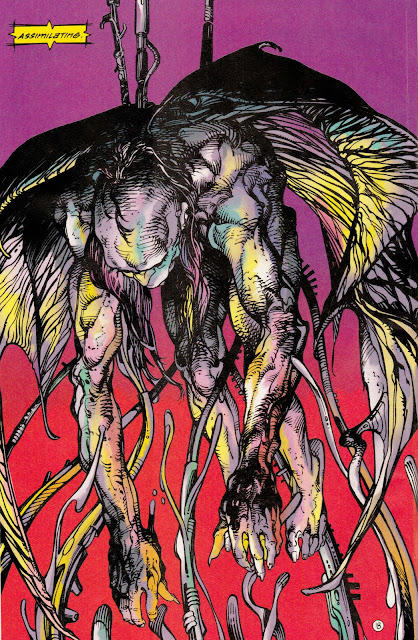 Like I said, when he isn't suffering from the crippling effects of Rune-confusion, Windsor-Smith can draw the shit out of things.

So anyway, the story continues with the police who aren't police taking Erik and the rest of them to something that looks like the Mammoth Car from the old Speed Racer cartoon (which is awesome, by the way) called "Aladdin" (I think … hmmm...I see the tie-in with the whole Genie thing now). It is at this point that Markie gets to say, "This blows" again.

Next, the comic cuts to lovely and tony Scarsdale, New York to the home of Noel Robinson (no, not JOEL Robinson) where Noel's parents are giving him up to the trench coated Jedi guys from the earlier scene. 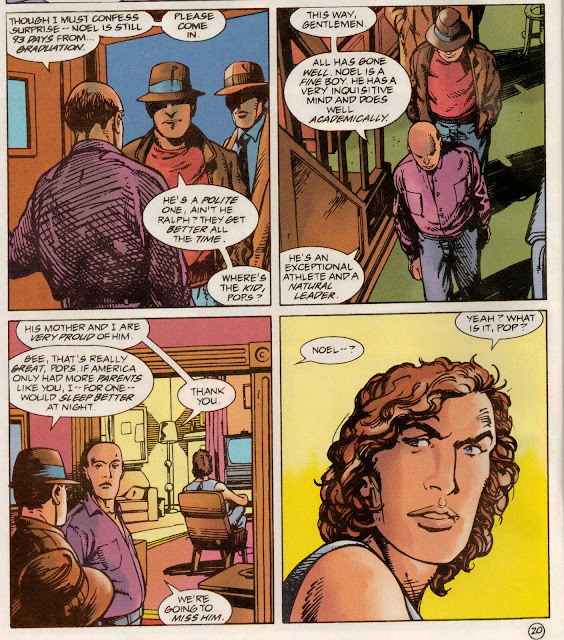 Now Noel looks a lot like Erik, at least to me, so this is only causes further confusion for me. I should really begin to notice that when the world of this comic goes yellow, as it does in the fourth panel above, I should anticipate another brain glitch occurring. 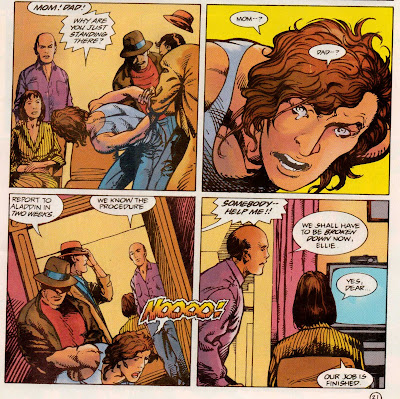 This leads me to believe that this is all part of some larger conspiracy and that Noel's parents aren't his parents at all, but are, like Erik's parents, just "biocons" – then again, there was another yellow world panel in this scene, so I cannot be held accountable for any inferences I may be making right now.

Noel's father says, "We shall have to be broken down now." Personally, I already feel that I was broken down about ten pages ago.

The comic ends back in the lab with the General and Genie. The General is dismayed when he hears that Noel has been brought into custody. 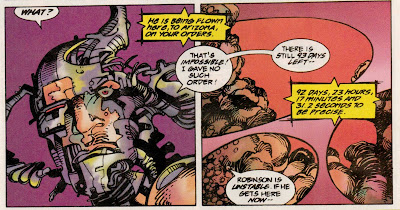 The demon seems to be interfacing with Genie and has taken over her "communication circuits." Not only this, but the demon also seems to have come out of its coma and is ready to assert itself again. 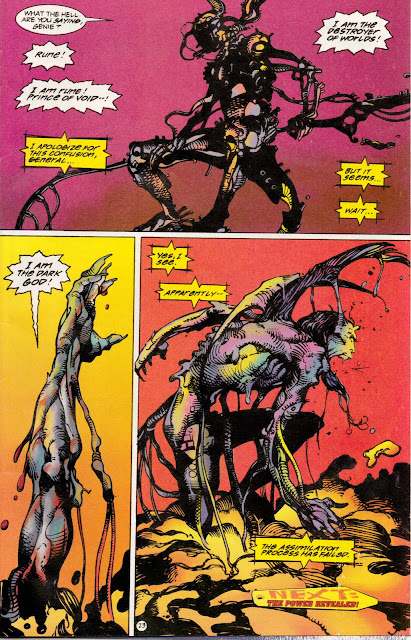 What it is crawling out of is unclear. It calls itself Rune and declares that it is "The Dark God". I have no idea what the implications of this are. The whole thing is pretty confusing.

Then again, there is that persnickety yellow background in that panel....

And that's where this comic ends – a question wrapped in an enigma and smothered in confusion sauce.

But at least it doesn't hurt.

Seriously, though. I am a sense-making being. I pride myself on my ability to comprehend new experiences within the framework of my prior knowledge. I make assumptions based on my past understanding of how the world works and apply these assumptions to new situations in order to put boundaries on my perceptions.

Rune #1 would not allow me to do this.

Certainly this accounts for my confusion, but it also, in a way, motivates me to want to make sense of what is going on. I feel halved, in a way, by this comic. My lack of understanding has left me unsettled, unwhole.

Did Malibu Comics and the team of Windsor-Smith/Ulm have the foresight to realize that if they produced a comic that was totally bewildering, yet strangely compelling, they would produce this sort of Pavlovian response in their readers, making them salivate for more. Is this some sort of truly insidious marketing ploy developed by top PR men and corporate big-wigs? Should Marvel and DC reconsider the tactics they are using to garner a larger readership for their products?

Then again, I did find this comic in the bargain bin.