AUTHOR'S NOTE: This Column Originally Appeared on Comics Bulletin
In these economic times, finding inexpensive entertainment is difficult. Thank goodness for the local comic shop and a slew of comics nobody cares about anymore! Each week Daniel Elkin randomly grabs a comic from the bargain bin (for 50 cents) to see what kind of bang he can get for his two-bits. These are those tales. 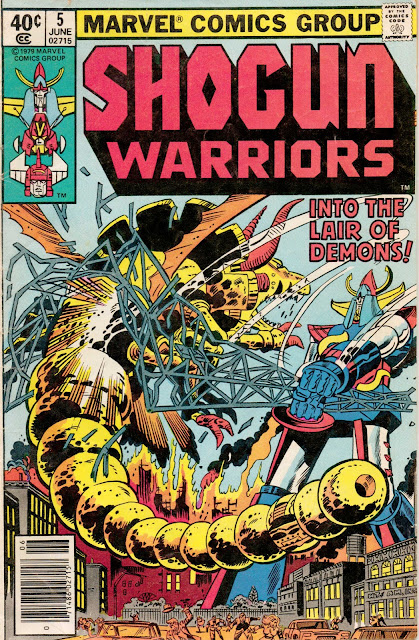 BACK OFF, CREEP! PARKS ARE MADE FOR PEOPLE!
For me, the two most significant events of June 1979 were the cancellation of Welcome Back, Kotter and the death of John Wayne. Of course Jimmy Carter and Leonid Brezhnev signed the SALT II agreement, Alexander Haig was almost assassinated by the Baader-Meinhof group, the Seattle SuperSonics won the NBA Championship, and Jello Biafra started his label Alternative Tentacles, but compared to the end to Kotter and Wayne – I mean, like, really….

June 1979 also saw the release of Candy-O by The Cars, Unknown Pleasures by Joy Division and Shogun Warriors #5 by Marvel Comics.

Yes, Shogun Warriors #5 was part of a 20 issue run of another licensed toy product tie-in by Marvel Comics (Rom Space Knight? Micronauts?). This one was based on a line of toys from Mattel that featured transforming giant robots from a Japanese cartoon (ooops, sorry, “anime”). The Shogun Warriors actually predated the Transformers, believe it or not. Marvel licensed only three of thirteen available Shogun Warrior toys for their comic book. These were Raydeen, Combatra, and Dangard Ace, and they were probably chosen because those were the ones whose names were sprinkled with the most awesome.

Before I go any further, though, I admit that I am a sucker for giant robots punching each other and blowing up stuff. The best of this genre, as far as I am concerned was the cartoon Megas XLR which only ran for a year (but what a glorious year it was).

So, to the comic itself. 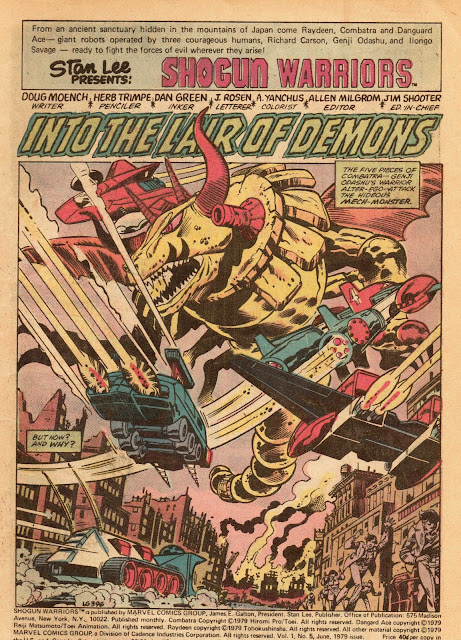 It’s a giant dragon made of stone being attacked by a bunch of vehicles in the middle of a destroyed city as people run in fear. This is a pretty good way to grab the audience’s attention, if you ask me.

How did we get here? What are these things? Why should we care? Luckily, writer Doug Moench heeded the clarion cry of Stan Lee and understood that every comic has the possibility of being someone’s first. Moench quickly does some backstory work.

Apparently Lt. Magar is a renegade Agent of Evil and hates science. By using his sorcery, he ends up creating a hybrid science/sorcery creature known aptly as Mech-Monster (the big stone dragon from the previous page). Mech-Monster attacks the city of Metrox, and Combatra, piloted by Genji Odashu (the Shogun Warriors need to be piloted, it seems), flies in to stop it.

In order to effectively battle Mech-Monster, Genji Odashu splits Combatra up into its “five-way conversion split.” 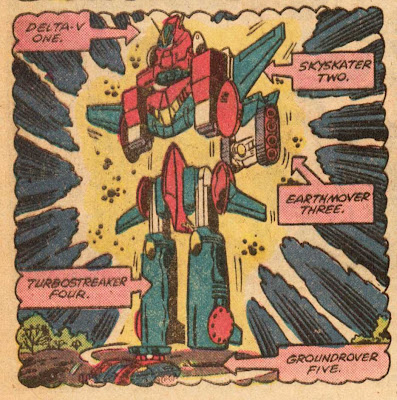 And we come to the present in the comic. Confused? Don’t be, because none of this really matters in the long run. There are giant robots battling and blowing stuff up. Plot is really secondary to this scenario.

Anyway, it turns out that Genji Odashu is not “experienced enough to coordinate the entire five-way attack” on her own, so she surrenders “control to the individual modules.” 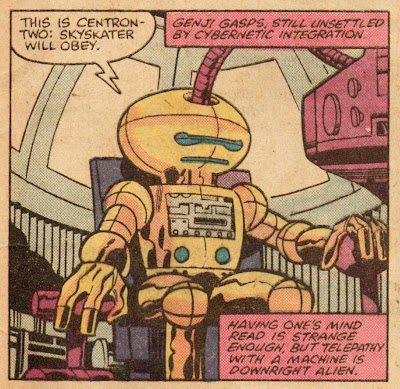 Gaah! That’s creepy, especially when you start to think about the fact that there is a robot operating a robot. Why they had to add an extra layer of robot to the mix is a bit confusing. Couldn’t control of the 1st layer of robot be done by computer?

But once again, giant robots – blowing up stuff – plot not important.

Genji Odashu and Combatra can’t seem to make any headway in blowing up Mech-Monster, so she calls for more giant robot backup in the form of Raydeen (piloted by Richard Carson) and Dangard Ace (piloted by Ilongo Savage). Before the other giant robots can get there, though, the giant robot team checks in with Dr. Tambura and “the followers” for some background on how to blow up Mech-Monster.

Dr. Tambura and “the followers” aren’t much help though. 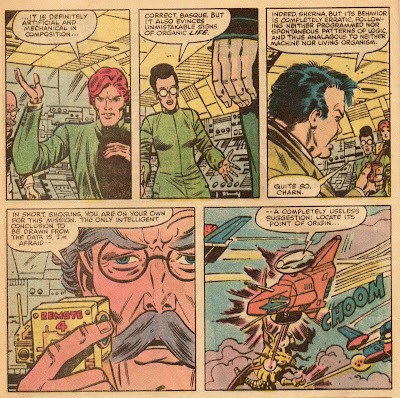 They can only provide a “completely useless suggestion.” Personally, I would have told the giant robot team that they should probably emphasize the blowing up angle in their fighting, but that’s me.

Raydeen and Dangard Ace finally show up and join Combatra in trying to blow up Mech-Monster, but it doesn’t seem to be working.

Richard Carson has an idea, though. 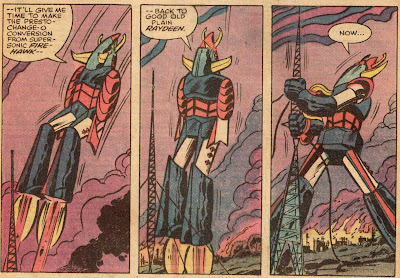 I love the technical terms in this panel, especially “presto-change-o conversion”.

So what is Richard Carson going to have Raydeen do with the television tower he just destroyed?

Oh yea! Parks are made for PEOPLE!
While this act doesn’t really fall into the “blow up” category, the fact that a giant robot is hitting a dragon made of stone with a huge hunk of metal still ranks it high on the awesome meter!

Mech-Monster doesn’t take kindly to this act and flies off. Richard Carson and Ilongo Savage start off after Mech-Monster, but Genji Odashu decides that the best way to win this battle is to follow Dr. Tambura’s completely useless suggestion and trace the source of the monster.

She and Combatra fly off on their own, headed towards “the haunt of Maur-Kon and his Followers of Darkness.” I assume these are other “followers” then the ones hooked up with Dr. Tambura. I also assume that Maur-Kon is the bad guy. But once again – giant robots blowing up stuff -- plot is unnecessary.

There’s a whole bunch of words between Maur-Kon and Lt. Magar that has nothing to do with blowing stuff up. Genji Odashu lands Combatra on the volcanic island that is Maur-Kon’s hideout. The only way in for her is too narrow for all of Combatra to fit, so Genji pilots Combatra’s head (Delta-V One) into the entrance, leaving “the rest of Combatra outside.” Little does she know, though, that Lt. Magar has set a trap. 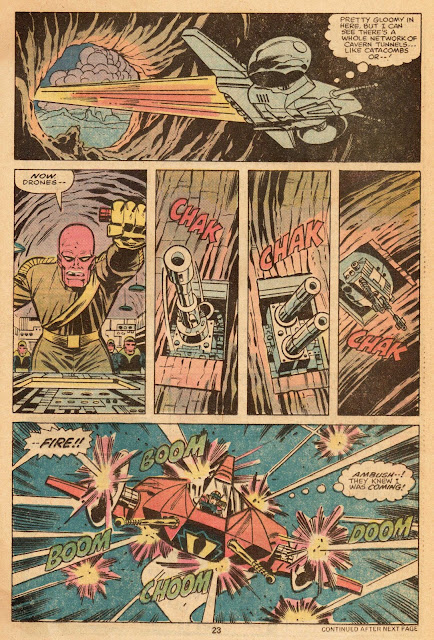 Awesome.
Combatra’s head (Delta-V One) crashes and “Genji spills from the cockpit like a rag doll.” Maur-Kon is pleased.

What’s up with this face, Trimpe? Were you bored with this plot nonsense, too, and wanted to get back to drawing giant robots blowing stuff up?

Maybe, because the next panel does just that. Ilongo Savage and Richard Carson are piloting Dangard Ace and Raydeen to the best of their abilities, but Mech-Monster is proving to be too much of a match for them. Ilongo Savage says, “Let’s hope Genji and Combatra can do something soon.”

The comic ends with another splash page. 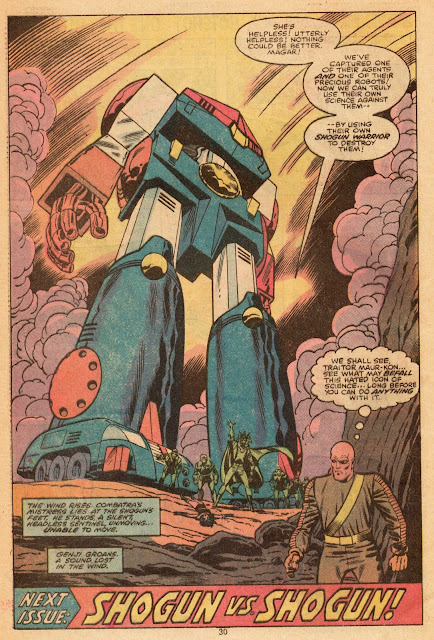 There’s a lot of words on this page that I am sure are important to the plot, but they have little to do with giant robots blowing up stuff. What I do see, though, is the teaser line at the bottom which promises more giant robots fighting giant robots (and probably blowing up stuff in the process). This makes me want to go out and find issue number six as quickly as possible.

What can I say about this comic that I haven’t already said? It has giant robots fighting and blowing up stuff; how can this possibly be bad? And for only fifty cents? I mean, come on!

Shogun Warriors #5 was great escapism. Do we need comics which pursue larger themes that address the human condition in a thoughtful manner to make us examine our preconceived notions in a way that could possibly lead to positive change?

Sure, of course we do.