The Conflation of Mythology, Fairy Tales, and Busytown: Matt Vadnais on MIMI AND THE WOLVES by Alabaster Pizzo 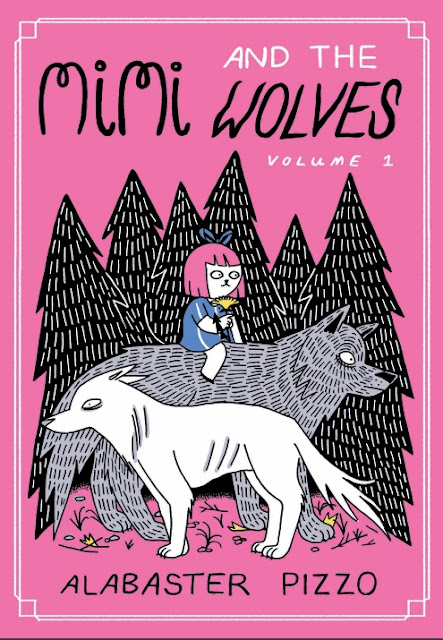 The title of Alabaster Pizzo’s Mimi and the Wolves immediately evokes the language of fairy tales, particularly those involving cautionary tales in which lessons about the grown-up world are discovered and embodied by a titular character who is probably about to learn a difficult lesson. Immediately, though, the visual idiom of Pizzo’s work expands to include other traditions that have frequently functioned to educate children about life’s mysteries. In volume one, which collects the first three acts of the story in which Mimi begins to question everything she knows, Pizzo interweaves a story of mythological import, using interstitial scene fragments to create an origin story – perhaps better thought of as a re-creation story – involving the Goddess of Love, a mysterious interloper, a powerful dagger, and the death of at least one wolf.
If one might expect the conflation of mythology and fairy tales, the third obvious influence regarding books designed to provide answers for children is far more surprising: the oeuvre of Richard Scarry and its many stories of the village of Busytown and its denizens of talking animals going about their jobs, sorting mail, picking up trash, and otherwise contributing to a functioning municipality. Nonetheless, in the first volume of Mimi and the Wolves, Pizzo evokes, consciously or otherwise, Scarry’s famous, fifty-year-old primer designed to explain the daily grind of a happy, modern city to younger readers. Like Busy, Busy Town, Pizzo opens Mimi and The Wolves with a cast of characters and a map of the surrounding locales. Likewise, the art style features a lot of big-headed, expressive animals, busy with the tasks of providing food, running a farm, and making art. 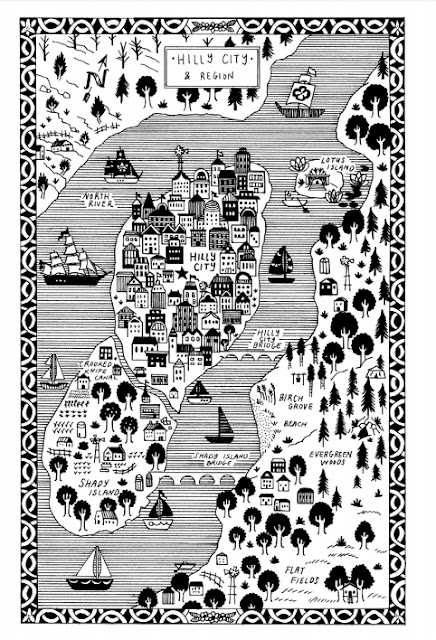 However, to the extent that such evocation is conscious, Pizzo appears to be using aspects of the visual diction of Scarry in order to draw attention to the ways in which the world of Mimi and the Wolves departs fully from the all-is-well consumer capitalism of Busytown. For starters, the anthropomorphic animals of Scarry’s world are defined by the roles they play in the functioning city to the extent that their individual personalities are conflated with their jobs and tasks; in Mimi and the Wolves, characters don’t have jobs or vocations so much as they simply do work, making burlap sacks or creating garlands to decorate the woods. In stark contrast to Scarry’s civic dictionary, Pizzo depicts a world in which individual personalities are shaped far less by their tasks than they are by nature; though one of the central questions raised by volume one pertains to the extent that this is true, much is made about the essential nature of wolves and other animals.  Nonetheless, like the much more didactic work of Richard Scarry, Mimi and the Wolves does act as a guide to the necessary work of preserving a community, securing food and comfort, and preparing for times of scarcity.
There is a difference, though, between jobs and needs. This part of Mimi’ and The Wolves’ relationship to the Busytown books is relatively easy to unpack: Mimi and The Wolves is a story about self-discovery in a world in which the rules of capitalist civility are useless, unimportant, or at least non-binding. The first volume depicts Mimi figuring out who she is after her “mate” leaves her. She takes a concoction prepared by Wormwood, a character who shares a name with a poison, and is led by a lucid dream to befriend a pair of wolves. While her community of friends – depicted thrillingly as a functioning support system that evokes an American sentiment more consistent with the Dust Bowl than a mythologized 1950s – continues to be skeptical about the true nature of wolves, she discovers more and more about “wolf culture” and the creatures who apparently commune with the same deity, Venus, she’s been dreaming about “forever.” The wolves share their lotus hookah with Mimi and, separately, soon grow to love her. As such, Pizzo  hijacks and repurposes the lexicon of talking animals – itself hijacked from a long history of cautionary fables and fairytales – and creates a kind of user’s guide to the forbidden parts of the forest that one can’t help but realize were meant to be beaten back by the kind of civilization mapped out, quite literally, by Scarry. 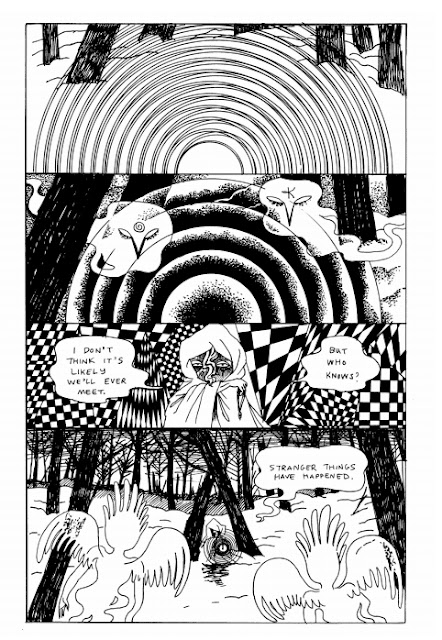 However, thinking about Mimi and The Wolves in the context of Busytown reveals a second, far more interesting relationship. Where the work of Scarry and the tradition of fairy tales can be thought of as varying degrees of nudges of gentleness intended to mold children in the image and expectations of adulthood, Pizzo’s story is one in which Mimi’s discoveries and intentions threaten to re-shape the world. Though it is too early in the story’s run to be certain how things add up thematically, the first volume ends with the implication that Mimi is every bit as dangerous for the wolves and “wolf culture” – or at least part of it, as wolf culture appears to contain civil strife – as they are for her.
In other words, Mimi and The Wolves is not simply another post-modern repurposing of the kinds of stories that have attempted to teach many of us how the world works; its specific magic has to do with how these various elements are combined in such a way that Mimi genuinely feels like the most powerful character in the story, even as she clearly has a long way to go in terms of understanding the world, herself, and the wolves she’s snuggling with. Central to this success is how clearly – if not cleanly – the characters love each other. Where most traditions of moral instruction rely on some kind of dogma about human nature, even one as mundane as what it means to be a postal worker in Busytown, Pizzo depicts a world in which love is far more powerful and binding than laws, rules, or other markers of society. What comes through, loud and clear in this first installment, is that love is as terrifying as it is magical. 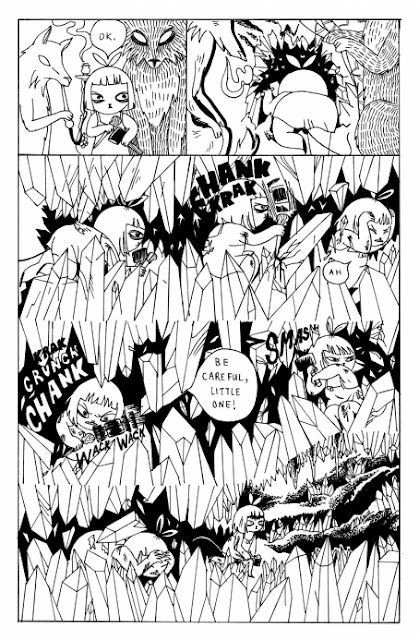 Ultimately, the first three acts of Mimi and the Wolves cast a powerful spell, infusing a visually disarming story about talking animals with the power of religious iconography. Never diminished by the things she doesn’t know, Mimi is one of the most compelling protagonists I’ve encountered recently, in part because, while modeling care and generosity for all she encounters, she appears to be capable of becoming just about anything.