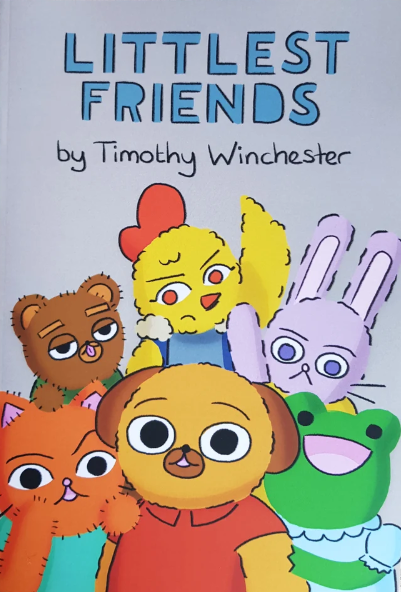 The world of 2019 can often look a bit bleak and hostile. Sometimes, the easiest way to find hope is to turn to fiction for solace. Unfortunately, the world of fiction also seems awash with darkness, violence, and “mature” storytelling. As such, any small beacon of hope and whimsy stands out brightly and begs to be discussed and amplified. Timothy Winchester’s Littlest Friends, functioning both as a sporadic webcomic and as an expanding collection of self-published print comics, is one of these beacons. A work of pure, distilled charm, Littlest Friends can extract a smile from almost anyone on even the darkest of days. Why? Because it’s so outstandingly delightful.

Every Littlest Friends story is a short piece of one to four pages in length, usually titled with a single word (e.g. Job or Emojis). They’re tiny scenes in the lives of the eponymous littlest friends, a group of anthropomorphic animals. These characters primarily act as though they’re in their 20s, but not entirely. Sometimes they feel younger and more carefree, and sometimes older. This fluidity gives them a sort of universality and a level of relatability unexpected from a group of protagonists who look like children’s picture book characters. 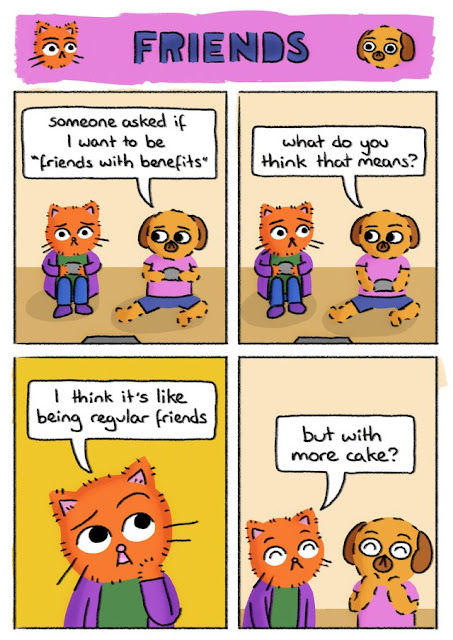 This picture book aesthetic is clear in Winchester’s art; every character is built on the same armature, with a large circular head (uniformly sized across the cast) and a simplified body. The colors are bright and eye-catching, and they stand out as solid, blocky figures against backgrounds of more restrained colors. Winchester’s rendition of fur and feathers is particularly pleasing, the borderless color blocks of the characters textured with scattered black lines. This clear, childlike sense of character design extends to the naming of the characters – the bear is named Teddy, the frog, Froggy, and in what is either a fit of genius or a truly unforgivable pun assault, the chicken (colored more like a baby chick), is Rebeakah.

To be clear, though, while Littlest Friends is entirely appropriate for readers of any age, the characters are approximately adults, their relatability focused on a greater maturity than the character designs might suggest at first glance. This is the genius of Littlest Friends. If children can have bright, simply designed characters and positive, delightful storytelling centered around broadly drawn characters they can relate to, why shouldn’t adults? Winchester has found an unusual niche here, but it’s one which seems unexpectedly important, particularly now as the world outside seems so grim. 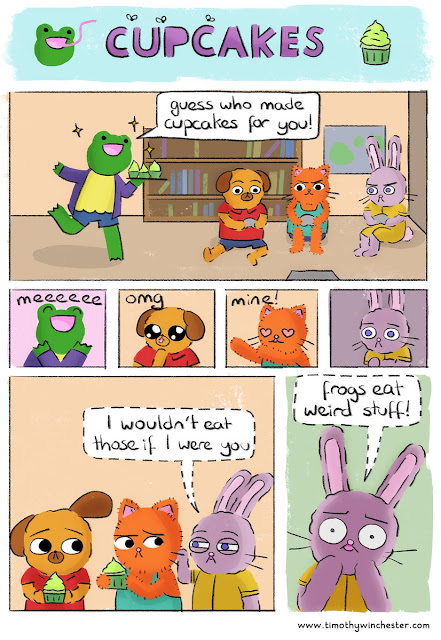 The entirety of Littlest Friends feels like the product of relaxed whimsy. While comics can often give a tangible sense of just how much time and effort has been poured into them, Littlest Friends never hints at such a thing. Instead, it constantly feels like a casual, low-stress form of storytelling that brings just as much calm and joy to Winchester as it does to the audience. To say that the art seems as though Winchester has put little effort into it feels dismissive and reductive, but here this is meant in the most positive and loving way. Littlest Friends strikes the reader as a project which is just as therapeutic for its creator as for its audience, and that’s a valuable thing for any artist to have in their repertoire.

The other important thread running through Littlest Friends perhaps ties into the above discussion of the series’ calming, therapeutic power for all, and that is a constant undercurrent of quiet anxiety. The characters do not go through major dramas, but the narratives are primarily driven by characters worrying about relatively trivial things. The characters suffer through the sort of minor problems that can feel so easily overwhelming for people, but the tone of the comic remains one of friendship and comfort. Winchester’s characters are always there for each other, through all the misunderstandings and embarrassments, and it is that stability that keeps the comic grounded in its wholesome reassuring nature. It would be easy for a comic so focused on the anxieties of its characters to slip into a mockery of their small struggles or to feel worried and uncertain overall, but the characters’ friendships ensure that this undercurrent of anxiety never dominates, instead remaining in the background. 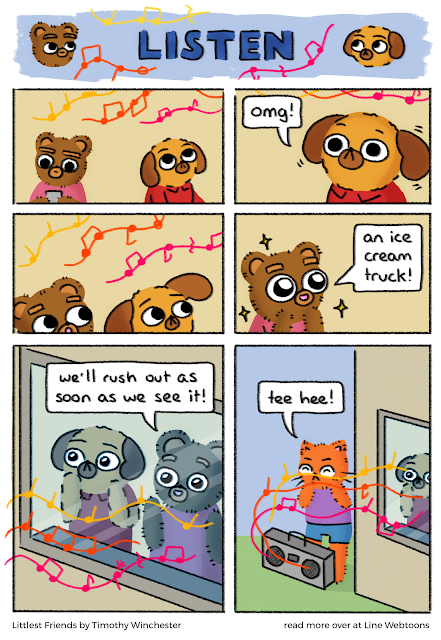 Winchester’s other work is also well worth your time. His other, slightly more serious comics are all stellar, and his (no longer updated) podcast People I Know (in which guests review scented candles with him) is a surreal, soothing, and inexplicably compelling experience. Also, he sells socks which look like dinosaurs, and if that doesn’t immediately appeal then you really need more joy in your life (such as dinosaur socks)! While all of these are similarly pleasing, it is Littlest Friends that brings all of Winchester’s strengths together most effectively. This comic is a reliable spot of warmth and brightness in a cold, dark world, and should be valued as such. The only point of sadness here is that it is such a rare example of its particular genre. The world would be a better, friendlier place if more comics like Littlest Friends existed. 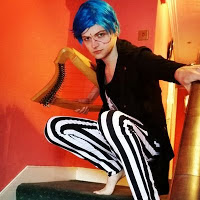 Oliver Gerlach is a feral classicist living wild somewhere in darkest Scotland. He is a comics writer, musician, and teacher (and occasionally several of the above at the same time). He can be found on twitter @olliegerlach, and slightly more professionally at oggerlach.wordpress.com