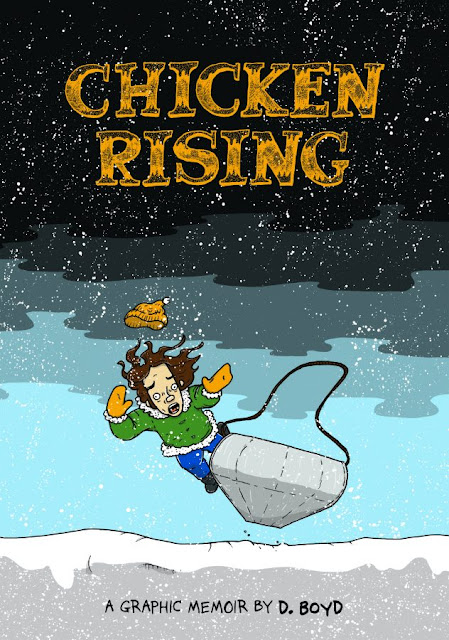 D. Boyd is an interesting example of an artist getting into comics later in life, as a kind of creative second act. Boyd worked in advertising and filmmaking for a number of years before working on Chicken Rising (Conundrum Press), a memoir of her time growing up in rural New Brunswick. From the very beginning of the book, Boyd establishes that her relationship with her parents was deeply dysfunctional. At the same time, she establishes how unusual the dynamic was. It's not spelled out until later, but she's the only child of much older parents, and the generational divide is especially stark given that the book is set in 1970. Her father owned a chicken restaurant that the whole family was part of, but he's either a profane and abusive presence or an absentee father. Boyd's mother was relentless in her needling criticism couched in trying to improve her, but she was also desperately lonely and clung to her daughter.

Throughout Chicken Rising, there are several competing emotional themes. One is that Boyd was a strong-willed child who bucked against authority. She had a well-formed sense of justice and often felt she's the aggrieved party but was never believed. At the same time, she spent most of her time with her parents and wanted nothing more than to please them. Her mother belittled Boyd's choices for careers and simultaneously criticized her for not having any friends while later criticizing the friends she made. Her mom encouraged her to not be shy while warning her against any activity with the slightest bit of danger, like riding a bicycle. Boyd shows all this with no retrospective narrative captions emphasizing this behavior; instead, she simply lets it unfold over time and slowly lets the reader in on her life and its general weirdness. 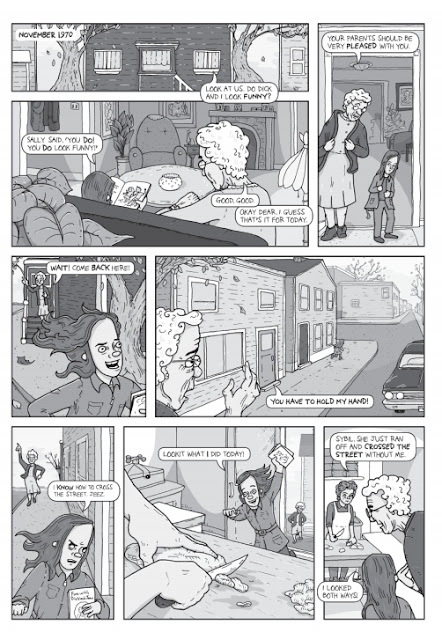 Not everything in Chicken Rising is grim, though. There are lots of humorous moments with her family, like the Christmas where she got a tape recorder. She later used it to record a family card game and the absurd, profane things her family said, getting a laugh from everyone. There was a genuine joy for her in growing up surrounded by nature, especially as a lonely child who looked for things to do. She loved drawing and art in general. She always had the sense that she wasn't like her family, as the things she loved they disapproved of and vice-versa. She hated the idea of hunting and fishing, as these activities caused pain to living things. When her father killed a bat that had come into the house, it was traumatizing for her. At the same time, she hated girly things and wanted to be more rough-and-tumble.

Beyond the spankings with a wooden spoon that were "for her own good," it's obvious that the real heart of the problem was that Boyd never felt heard or believed. Her mother demanded rigid honesty but never forgave Boyd's childish fibs and frequently ignored what would later be serious concerns. A child who feels like they aren't being heard is one who will begin to keep secrets. Moreover, that's a child who won't share their traumatic experiences with their parents and get help. This is exactly what happened to Boyd, and there's a climactic scene where she had horrible premenstrual cramping prior to menarche, but her mother accused her of faking them. When Boyd's period arrived and she was cleaning her own sheets, which in itself is a pointed act -- she didn't come to her mother for help. When her mother realized that she was telling the truth, years of frustration spilled out of Boyd: "You never believe me! I'm afraid to tell you anything! Everything's my fault! Nothing's ever good enough!" This panel perfectly encapsulates Boyd's style as a cartoonist: cartoony and slightly grotesque, emphasizing distinctive facial features like her nose. 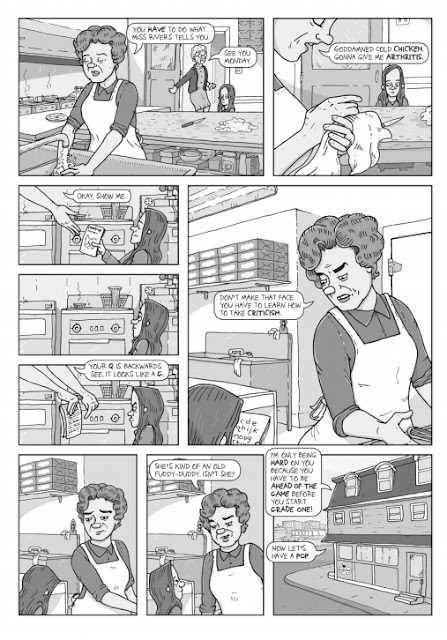 What is interesting about that final confrontation is that while it did initiate a sea change in their relationship, it was still far too late to fix old damage. That was expressed by her mother apologizing in a fascinating series of statements. There's an apology, then an expression of trying to toughen up her daughter because it's a cruel world, then blaming herself, then expressing that she had turned out like her own mother and was inflicting that on Boyd. There's the final, pathetic hope that Boyd might understand one day when she had children, which leads to Boyd talking about how she never wanted children and hated being a girl. After that, they stayed up later and watched movies, her mother asking her to stay up even when Boyd initially stated she was going to bed. This is a subtle expression of her mother's loneliness but also an expression of how she saw her daughter more like an adult now. This had multiple implications, positive and negative. Boyd’s mother may have started taking her more seriously, but it was clear that she was going to make emotional demands on Boyd that weren't necessarily appropriate.

And as noted earlier, it was too late to fix old damage. Bonds that should have been there all along in regards to trust had been shattered, and the result is that we start to see Boyd pull away. This is symbolized by her secretly starting smoking at the end of the book, as well as her wanting to spend more time alone in the house. For better or worse, Boyd was now about to fiercely declare her own independence as a person and turn her gaze outward. Indeed, that notion is reflected in the final iteration of a running motif in the book, where she declares what she wanted to be when she grew up. Most of the time, she told her mother this, and she shot down the notion. Be it artist or astronaut, her relentlessly negative mother found some way to negate her daughter. So it is telling that the final time she mentions it in the book, she tells her friend that she is going to be a psychiatrist. In her mind at the time, a psychiatrist was no doubt not just someone who strove to understand human behavior and pathology, but this choice of career also gave her the authority to fix it. She saw constant dysfunction around her, so it's no wonder that she'd want a job that gave her control over that wider societal dysfunction. 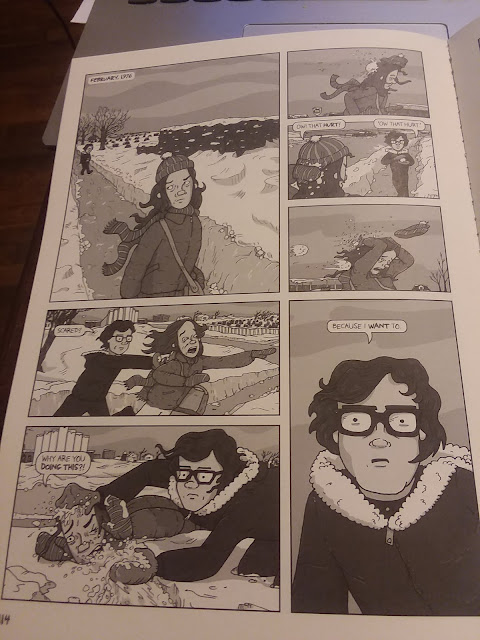 Indeed, Boyd makes a point of showing how awful most adults around her were. As an only child (a clear rarity at that time and in that part of Canada), she was constantly being preemptively criticized for being spoiled and willful. This was often by people she didn't know, like smarmy waiters and kids in class. The fact that she was constantly being sexually harassed and assaulted is finally addressed at the end of the book when she makes an adult believe her. There is one scene where a boy knocks her down in the snow and rubs her face in it, and when she pleads as to why, he coldly says, "Because I want to." Boyd had an intuitive sense that this kind of horrific behavior didn't arise out of nowhere, and even she herself felt this urge to strike out when she destroyed some of her toys. This is a telling scene because she felt horrible about that violent urge and later buried the evidence. Even at her most detached state as a pre-teen, she found a way to express independence, feel better about herself and concoct a plan to fix the world around her. She wants others to be heard and believed in a way that she never was.

It is clear that by the end of the book, a lifetime of not being heard made Boyd cynical.

This is the essence of the book, in fact. It wasn't one or two incidents that broke Boyd of her trust and faith, it was years' worth of having dreams snuffed out, of arbitrary restrictions, of needling criticisms, and, especially, of being accused of lying. Boyd is careful not to make Chicken Rising simply an airing of grievances. She recognizes her mother in particular as a flawed, but loving, individual who desperately craved love herself. She depicts her mother as standing up for her at times and, at the very least, always being there. However, Boyd makes it clear that a lifetime of disbelief was dispiriting and hardening, and hints that it would later lead to bad choices. The vivid quality of her depictions and the revealing amount of personal detail is what makes Chicken Rising such a memorable reading experience.