Change Too Often Comes At A Cost To Those Who Have No Debt To Be Paid: David Fairbanks reviews MARSUPIAL MATCH by Ana Hinojosa 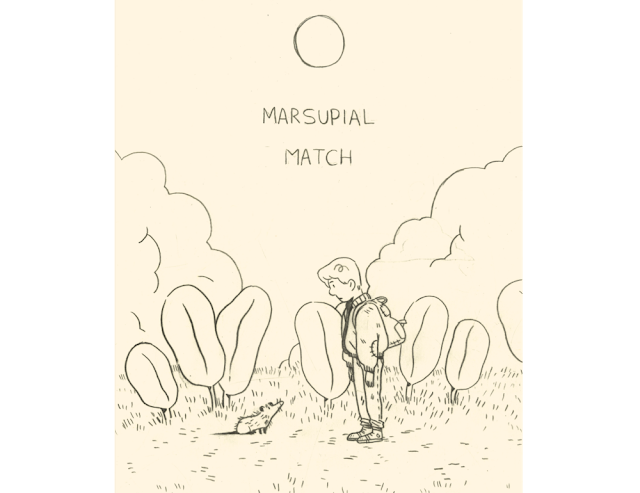 Do you know who Ana Hinojosa is? If you're reading Your Chicken Enemy, you presumably like comics, and if you like comics, you should know who Ana Hinojosa is. While it was her Bedroom 2017-2018 prints that caught my eye at CAKE 2018, the "read me" sign stuck in an open copy of Marsupial Match brought out my wallet. I picked up the display copy and its smooth-but-not-too-smooth texture reminded how important every aspect of a minicomic can be; Marsupial Match was new, yet already it felt familiar. I slipped my thumb under the cover and opened to an inner cover of pink gridlines and a first page that tells quite the story on its own: 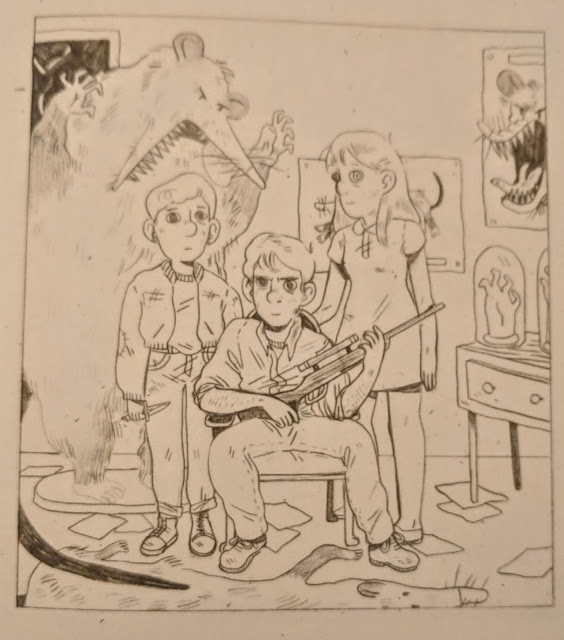 What you don't get in the picture above is the cartoonist herself saying "it's a story about a boy named Gustavo, raised in a family of opossum hunters, who decides he doesn't want to hunt opossums." And that's all it really took. I swiped my card, slid the bagged comic into my tote, and went about the festival.

Marsupial Match wasn't done with me, however.

CAKE exists in a shared space at the Center on Halsted, which has a seating area on the main floor where CAKE-goers regularly sit down, sort through their hauls, and snack on something from the adjacent Whole Foods. It's here, between bites of salad, that Marsupial Match came back out of the tote and bludgeoned me with feelings in a pretty public space. Uncomfortable with his family's ritualistic hunting and killing, Gustavo flees home and no sooner is he out the door than he meets someone who would be prey to his family: Opossum Opossum.

Though apprehensive of each other, the two become friendly, leaving neither alone in the wilderness. A sparse, yet convincing wilderness that reminds me of Anders Nilsen, though I hesitate at what feels like an unfair comparison for Hinojosa. Nilsen's subject matter often gives his sparse style a sterility, a coldness that rarely does him any favors; his lines may wobble at times, but his pages simply feel too clean. Hinojosa's blades of grass, on the other hand, look disordered enough to be real; they complement the sparse fur and wayward whiskers of Opossum. The gargantuan leaves of her wilderness look paused mid-breeze, arranged just so, framing Opossum and Gustavo in a scene. Her disarray is a disarray with a purpose.

Hinojosa does a brilliant job of building up the relationship between her two characters, with Opossum living in this unusual space between animal and human. She gives Opossum no dialogue, yet they very clearly respond to each of Gustavo's questions. Opossum has a life that we as readers are not at all privy to, a life that includes a driver's license and at least one joyride in a convertible. 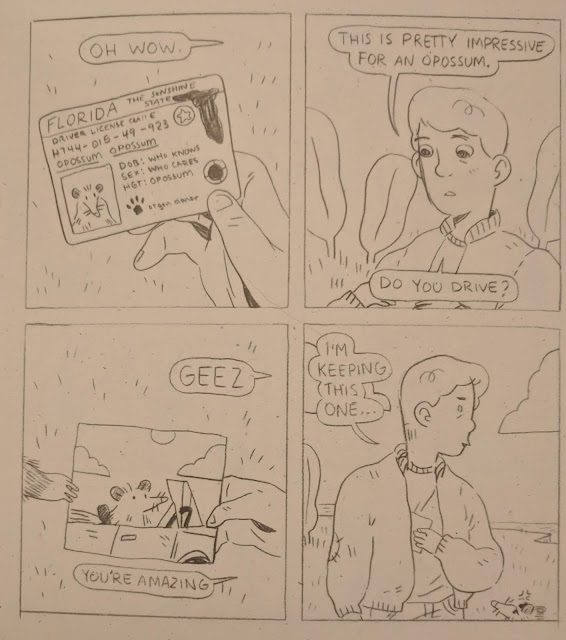 When tragedy strikes, it comes from both characters reverting to their baser instincts, Gustavo doing so first -- and then reacting more violently -- speaks volumes about his past, about humanity. Gustavo simply pockets the photo of Opossum as if he has a claim to it, sabotaging whatever trust had been gained between these two strangers. Who could blame Opossum for biting the thief, either? Yet that has Gustavo draw a blade, and… you know, a fight between an opossum and a teenager may not sound particularly exciting. And in the hands of a lesser cartoonist, the tension may have been defused, the comic spoiled. But Hinojosa's command of pacing is praiseworthy. 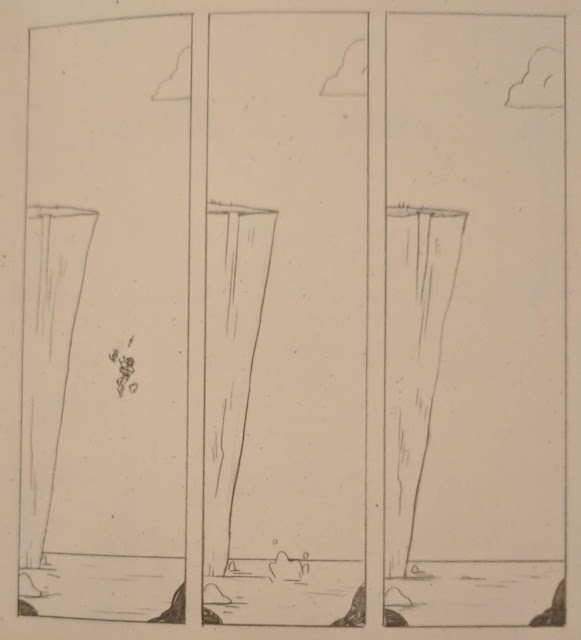 Here again, Hinojosa's sparseness works to great advantage, forcing the reader to see these characters we have briefly grown attached to fall, disappear beneath the water, and then… nothing. When they eventually emerge from the water, Opossum's disheveled fur is now marred by graphite. It would be easy to have the red of the blood be the only piece of color in a comic like this, but there is something about the splotch of black lead spreading from Opossum to Gustavo's hand to his jacket, the soft dark of pencil lead migrating, transferring from skin to skin at first unnoticeably, but with a tenacity familiar to anyone who has picked up a pencil and drawn for more than ten minutes. She creates a metaphor that taps into one of the most common experiences -- the realization that your hand has picked up quite a bit of lead from a drawing you've been working on -- and then says "yes, this is what it is like to grievously wound someone you care about without realizing or meaning to, and it's just as difficult to clean up."

In 16 pages, Marsupial Match introduces us to a pair of characters, tells us just enough to get attached, and subjects the reader to the incredible range of human emotions. Hinojosa makes it easy to see something of ourselves in Gustavo, someone who wishes to be different from, perhaps better than, those who came before him. She presents the idea that a character raised in a toxic environment can change but that it's far from simple and nowhere near easy to do so, and that change too often comes at a cost to those who have no debt to be paid.

Marsupial Match is unwilling to answer lingering questions about Gustavo and Opossum beyond "have they survived," and it's a testament to the strength of their characterization that I want to know what happens next for them, feel as though I already know, and also want to live in the ambiguity of a wounded opossum left alone in a hospital bed. I don't suspect there will ever be another story with these characters, as Hinojosa deftly recreates the feeling of a person entering and leaving your life, uncertain of whether they will ever return. 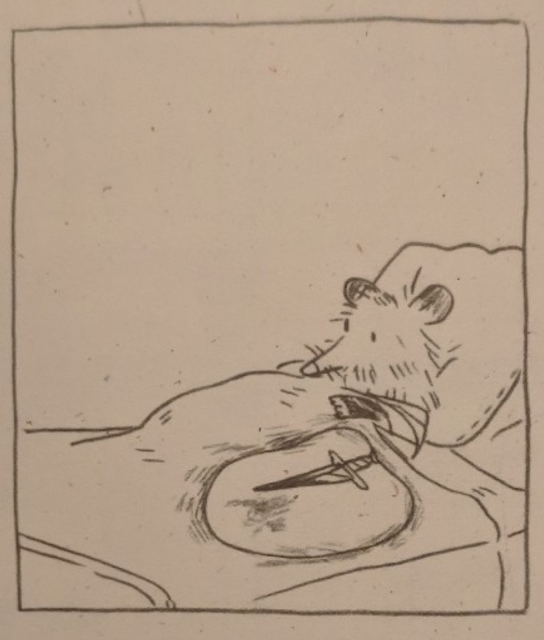 You can find Ana Hinojosa online at www.anahin.com. 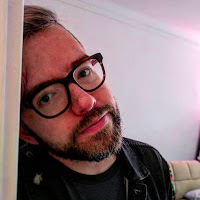 David Fairbanks is an artist, poet, and critic who makes a living doing none of those things. David's work has appeared at Loser City, Comics Bulletin, FreezeRay, DayOne, and now Your Chicken Enemy. His handle is bairfanx basically everywhere, and you can learn more at his charming yet infrequently updated website: davidjfairbanks.com.