I still remember the grass shivering, like we lived within a waking dream. We could see the plants sprouting, the sky’s womb-like curve, and how, maybe, if we reached out in just the right way the air would smear onto our palms like fresh paint off a canvas. I danced in that dream, trying to merge with it while simultaneously knowing it already possessed me within its physical dimension. The Earth was motherly. Beauty was within everything. I was a toddler again.

This is how I felt while tripping on mushrooms with a close friend of mine in a local park just a few months ago. Mushrooms smooth out your consciousness, making the simple things the grandest you’ve ever seen, transporting you to a mindset long forgotten thanks to age. Providing that the trip goes well, most people report lifted moods. Some say they feel like they visited or saw other dimensions. Many never want to leave. 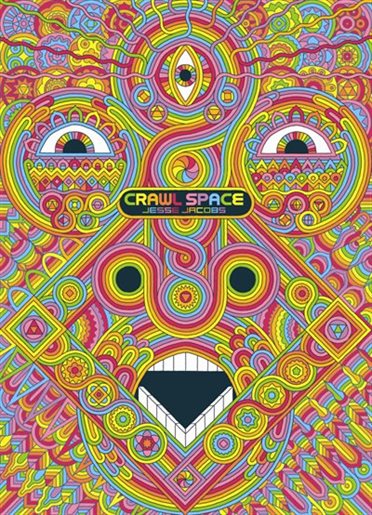 In Jesse Jacobs’ Crawl Space, published by Koyama Press, these other dimensions exist inside of a washing machine belonging to his protagonist’s house. Crawl Space opens up as Daisy, the said teenaged protagonist, takes a new friend named Jeanne-Claude out for a trip across this rip in cosmic fabric. There they experience a number of incredible things, such as creatures shaped like teapots and color transferring into sensation.

And boy is it sensational. 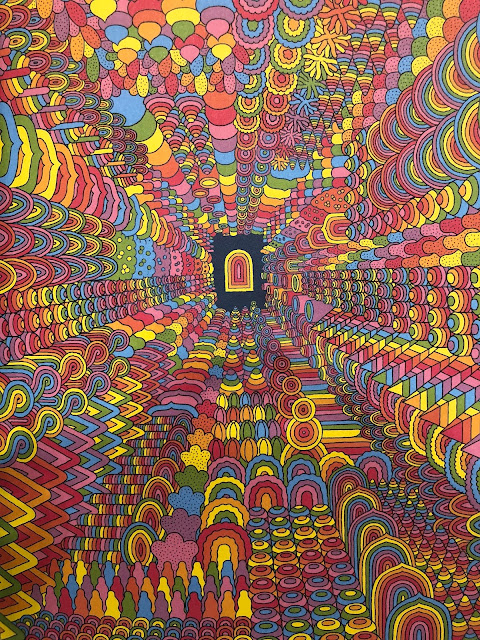 Jacobs not only uses all the colors of the rainbow to evoke this otherworldly dimension’s beauty, but also builds within it a kaleidoscope-like movement. These colors wind and swell and burst, creating an effect so powerful that one cannot help but become absorbed by their intensity. Reading Crawl Space is too akin to hallucinating; it takes over the mind as much as any illicit substance. As long as one reads, one trips.

But Crawl Space doesn’t entirely take place in this awestriking dimension. The comparatively dull physical realm, which Jacobs positions in the suburbs, is depicted in black and white. The suffocation of these suburbs — as indistinguishable from any other that Daisy, new in town, has surely already lived within — is further evoked by the blockiness of Jacobs’ depictions of Daisy’s house and the schoolyard. When in their normal states, as opposed to the unique rainbow forms they each take when visiting the other dimension, all of the kids have heads that are precisely geometrically shaped. Within the physical realm, you see, there are rules. There are rules in how matter is shaped, the rules set by your parents, and also there are the unspoken rules that link together relationships and create the valuable currency of reputation.

One can control and manipulate these rules to an extent, which Daisy attempts to do. “Hey, can you not tell any of the kids in school about all of this? I’m still trying to fit in,” she asks of Jeanne-Claude, trying to set the parameters so that she can blend into her new home. In the past, her fellow students have spent time with her only for the experiences she can offer them, not because of who she is as a person. Like any other teenager, she wants to be just another house in a suburban lane rather than draw attention as a novelty. 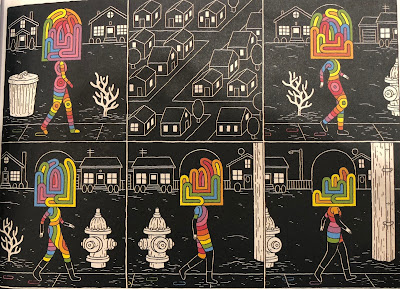 Unfortunately, Jeanne-Claude isn’t so dissimilar to the people who have used Daisy in the past. She almost immediately betrays her, and soon all of the kids at school learn about the magical washing machine.

Like people who trip on mushrooms, there’s some disagreement between the kids in Crawl Space about the other dimension and whether or not its effects take place internally or externally. “It’s just chemicals in the brain,” says one of the more cynical individuals in a two-page spread of kids — most still covered in the other dimension’s abstract rainbows —  contributing their opinions on the other world. On the other side of the spectrum reveals something striking: the grid of human inventions is missing representation in one area. 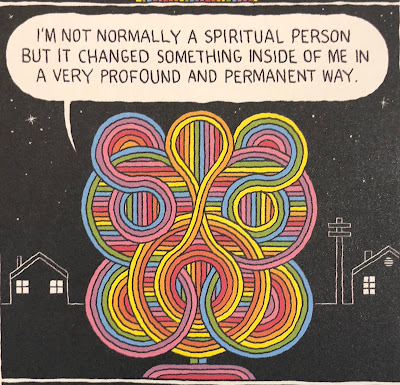 “I’m not normally a spiritual person, but it changed something inside of me in a very profound and permanent way.”

We never see who says this, which is surprising given that they hit upon one of Crawl Space’s main elements. Jacobs, via expository narrative, states the other world’s source and form quite factually, as how Genesis explains the Hebrew God creating the world in seven days. Of course, the concept itself of there existing “several known worlds beyond the physical,” is more akin to other religions and spiritualities, such as Buddhism’s Ten Realms. What the kids experience in the main storyline is typically “reserved for highly enlightened beings.” With panic, we witness Daisy going so deep into the other world that she reaches some form of nirvana. This allows her to carry the world inside of herself even as the entrance to the cosmic rip is removed.

(Religion makes sense! I shouted at my friend at some point in the beginning of our trip, uncouth and overwhelmed.)

What defines spirituality? While the rules of the physical plane betray us as Jeanne-Claude betrays Daisy, spirituality — much like Crawl Space’s other world — contains no limitations. It twists and brightens you into something unique from all others around you, freeing you from the confines of the mere external. As surely as Thich Quang Duc burned and the Jews survived centuries of persecution, spirituality has reigned in times and places where literacy, science, and math have not.

The rules of the physical plane do not work for Daisy. She doesn’t belong where she lives. Her parents are strict. She has no true friends. But when she finds the other world, she understands her place in the universe.

“That thing will never survive out here in the suburbs!” she says while chasing a rainbow worm that Jeanne-Claude stole from the other world. In truth, that “thing” is herself. Jacobs highlights this via aerial shots of the streets, fenced in by neat rows of houses that are each indistinguishable from its neighbors. Crawl Space admits that we are all unique in our own way via Jacobs’ painstakingly individual rainbow designs for each kid, but most are not in tune with higher concepts that define how we’re unique. After all, when you grow up in a black and white world, without even a shade of gray in sight, it can be hard to see how the rules of that world can be different. How you can be different, both as an individual entity and how you connect to others.

However, Daisy is already different. She converts herself so far into the other world that she does not, and cannot, come out again. 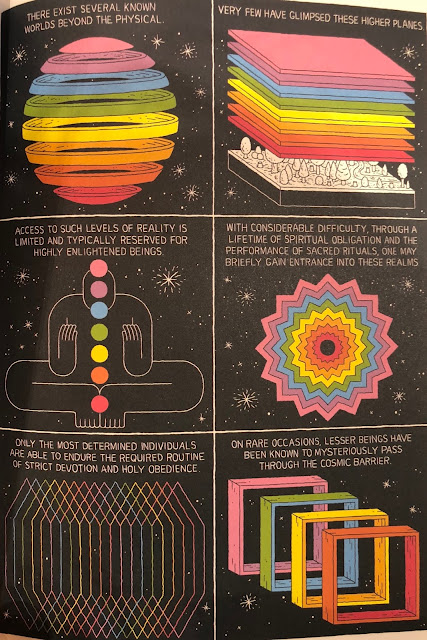 But then again, perhaps we all cannot come out again if exposed to something as marvelous as a drug trip or a good comic. Both explode the senses, translating one experience into another. As surely as mushrooms split the qualities of a miso eggplant into four thrashing stages in my mouth does Crawl Space assemble colors and shapes into something so ecstatic that it activates something deep inside the mind.

As cheesy as it sounds, Crawl Space asks us to acknowledge our own internal rainbow forms, to open our minds and envision a world that goes beyond the rules we live within. And by having us follow Daisy’s story, it asks us to do so with empathy and pure intentions. While Jacobs’ brilliant art and vision breaks barriers for how color and abstraction can be used to weave a narrative, we can break barriers in our own lives.