This week I got to explore what's going on in the world of Poetry Comics
over on Comics Bulletin.

First was THIS ESSAY by Alexander Rothman, the Editor-in-Chief of the premier Comics Poetry journal, Ink Brick. 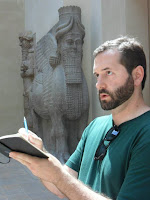 As a new form (or at least one where precedents are rarely accessible), comics poetry is difficult and uncharted. Practitioners must figure out what they’re doing. And more fundamentally than with most work, audiences must figure out how to read it. Our media environment encourages quick consumption of content that is increasingly custom tailored. This work, on the other hand, asks us to walk a mile or two in someone else’s brain.

Next, I badgered Austin Lanari into writing THIS REVIEW of Ink Brick #5

My favorite thing about Ink Brick is not just that the work is often challenging: it’s that the challenges it often presents to the reader do not in any way resemble the often more literary challenges of more traditional comic books.  This has an effect of broadening any reader’s appreciation for sequential art as a whole (and arguably fine art or poetry as well).  That kind of expansive rewiring is in stark contrast to the often insulating effect that sticking to one kind of work can elicit.

Next came an INTERVIEW I did with Chrissy Williams, one of the Editors of Over The Line: An Introduction to Poetry Comics

So I suppose the thing to say, even though I realize how obvious it sounds, is that the genre needs to be defined fundamentally as an inextricable combination of both comics and poetry, neither of which should be dispensable. In the best poetry comics, I believe, the piece would fail utterly (or at best be horrifically diminished) if you removed either the poetry or the artwork from the composition.
That may not be what you mean though. You may mean “yes, fine – but what is it?” Or, in other words, what does it do that distinguishes it from either comics or poetry? Well, poetry is used to creating meaning with text alone (either on the page, or audibly), so putting it into a visual sequence makes it something different. It now finds it has help in building imagery that it didn’t have before, and has to ask itself “how can we keep this interesting and make sure we’re not just repeating ourselves?”
Finally, for Tiny Pages Made of Ashes (our small press review column) I got Ray Sonne to write this REVIEW of Sarah Ferrick's SEC

Ferrick’s poetic lines hitch and groan, interrupting the speaker’s passion (“I want to fuck you!” screams one page in a curly, nearly unreadable red) with their anxiety and frustration as they fail and fail and fail again to find completion. “One sec, one sec, one sec” evolves into the speed and tempo of a bedsheet mantra. The sickening desperation of the speaker only ceases as the comic becomes wordless, giving into the blossoming of bright red, vulva-like flowers with brown pubic hair drawn on the higher points of their stems. Orgasm has no words and neither does its post-coital peace, which is represented on the last page via a flower of purple and yellow, two colors previously unused.

While I wrote reviews of LATE BLOOMER by mare' odomo

Ultimately framed as a journey, Late Bloomer examines that which is without, within, as odomo works through what it means to be an individual in world among others: how we interact, what we desire, how we perceive and are perceived, what we reject and are rejected for. It’s messy business, and odomo’s work reflects this. Page after page are filled with smudges and things almost violently crossed out. Some pages are only half-filled, others framed, yet left blank. Thoughts are begun, reflected upon, abandoned or tossed aside in frustration caused by either an inability to understand or the necessity to move forward. Moments of tightly rendered landscapes are juxtaposed with the crosshatch of window screens or almost oppressive urban streets.

And TIME CAPSULE by Maggie Umber 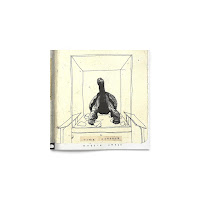 Umber’s work is comics poetry insomuch as it is neither narrative nor sequential. It is, instead, a series of images — landscapes, bats, insects, snails, snakes, birds, chimpanzees — boxed in panels, sometimes alone on a page, sometimes crowded together, juxtaposed with numbers and letters, as if apartment addresses, our own little boxes. Everything is rendered in a moment, sometimes nimbly as if to record it as it happens, other times tightly detailed as if by capturing each element of her subject she can give it some permanence. Placed together, her pages resonate with her final admonition, “We are now entering the sixth great mass extinction event. If it is allowed to continue life would take many millions of years to recover and our species itself would likely disappear early on.”