Books in Bites 8: Three Comics Worth Your Attention

A WRETCH LIKE ME: SAD/BLACK/UGLY/QUEER by Ebin Lee
Published by Sparkplug Books
Available Here 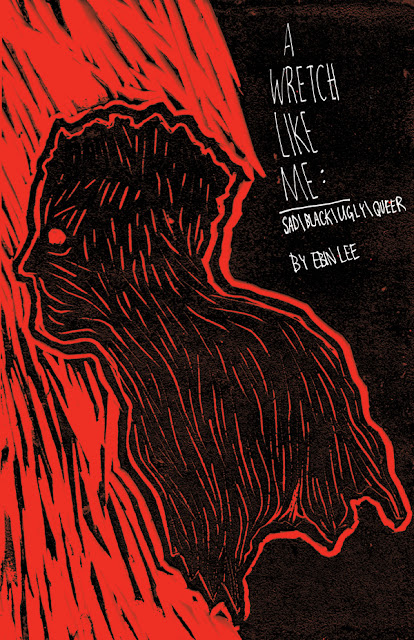 This book is visceral, thick, unyielding, honest, and defined. Of A Wretch Like Me, creator Ebin Lee says it is “an ongoing project about blackness/depression/anxiety and dysphoria. Another core theme is being black in white spaces.” This is a book that fosters understanding and adds to the conversation, but it is also a book from which you step back in order not to interrupt. A Wretch Like Me is a work recognizing this individual and what this artist wrestles with in the world.

Simple in presentation and working in heavy inks, the narrative follows neither time nor story, but conveys perspective -- the reader comprehends Lee through images that tap the communicative moment -- the heart fluent and forceful -- bridging the disconnect by connecting. My experience being so far removed from Lee’s, I can only receive the artist’s perceptions and feel its truth. 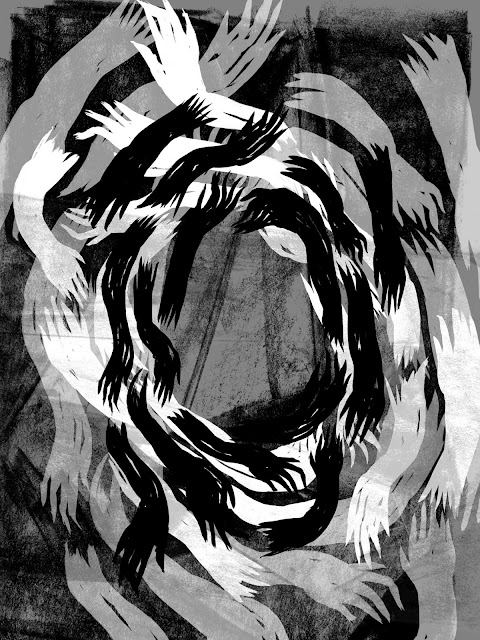 What does it mean to be black? To be depressed? To be queer? To feel ugly? Lee is not seeking pity. This is a creator conveying those truths that are singular in comprehension and inwardness, yet universal in their veracity.

This is hard art. Unrelenting and necessary. 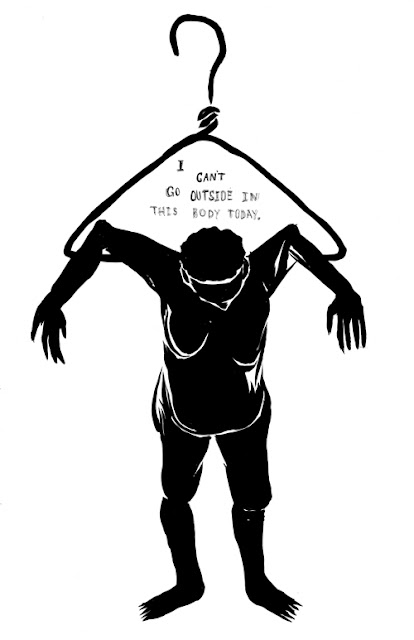 A Wretch Like Me: Sad/Black/Ugly/Queer is the fifth book published by Sparkplug Books as part of their Minis Series.

You should pick up a copy of it here. 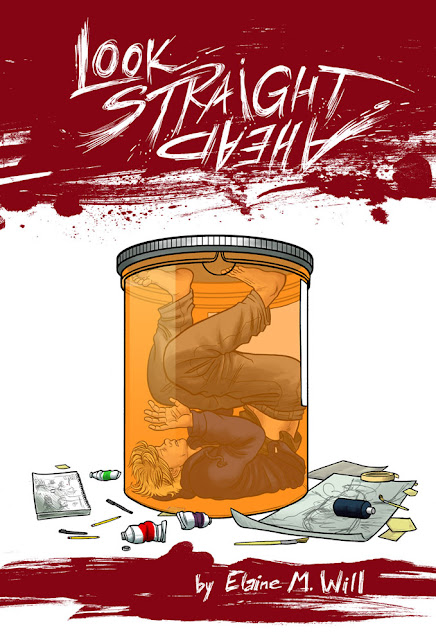 Mental illness frightens us more than cancer. It strikes to very heart of our conceptions of self, illuminating them to be fragile and, even more horrifying, transient. To see someone in the grips of schizophrenic hallucinations or manic reckless behavior, we struggle to understand who the person “really” is. More importantly, we fear them, ignore them, relegate them to living like animals in the street or locked behind doors away from our discomfort with their “behavior”.

It is another of the great shames of society and its inability to deal with the “other”.

Published in 2013, Look Straight Ahead brings its readers straight into the maws of mental illness. Though having as its narrative center a seventeen year old high school boy, the best pages of this book transcend its limited perspective and surge and heave into the chaos of bipolar disorder -- the hallucinations and the inner voices and the grandiosity and the indignity.  Even though Elaine Will distances herself from the experience through her choice of narrator, you can still feel the intensity of her personal encounter with what she describes in her lines and her layouts and her teetering on the edges. 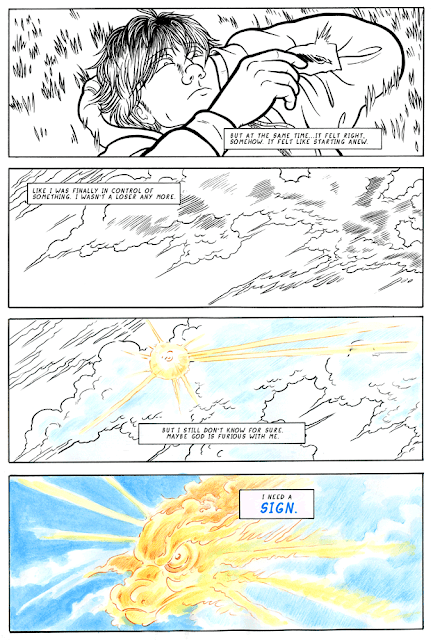 While ultimately redemptive, it’s hard not to get enmeshed in the horror and the disconnect that Will inks on her pages. The vividness of experience that saturate these pages is almost overwhelming, as if you have to struggle to not fall into the moments in and of themselves. It would be difficult to read Look Straight Ahead and not gain some larger insight into the experience of mental illness, it would speak to the kind of person you are if you continued to view those among us who struggle with these issues as “things” to be feared.

What Elaine Will does in this book is remind us that there are people in the statistics, that there is pain in the disease, and that understanding is the first step to acknowledging these facts.

You can purchase Look Straight Ahead here.

š! #23: REDRAWING STORIES FROM THE PAST
published by kuš! komikss
Available Here 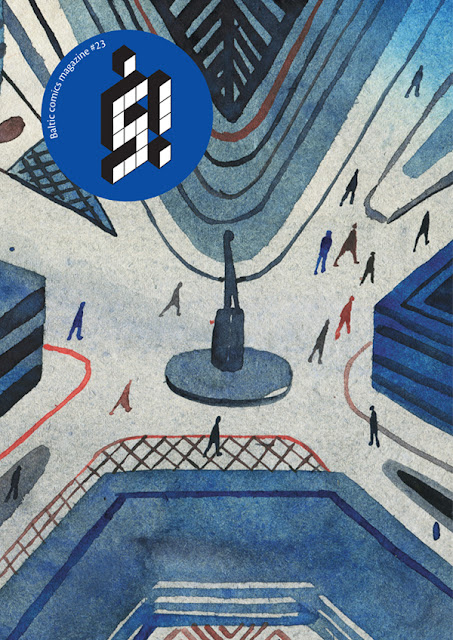 The latest anthology from Latvian publishing house kuš! komikss is, perhaps, their most powerful to date. In š! #23 “five young European artists shed some light on one of the darkest periods of our past. They tell stories about victims of National Socialism based on incidents and biographies found and researched during the project Redrawing Stories from the Past.”

As we get further and further away from the atrocities of the Holocaust, the direct impact and true repugnance of this event dissipates. This calculated and organized genocide is, seemingly, becoming just another topic in an already overloaded history class or, even worse, the punch-line of comedy shows. 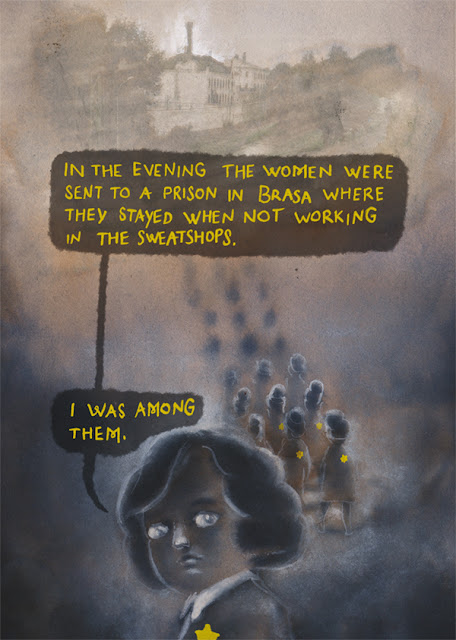 You hear the refrain over and over again, “Haven’t we heard enough?” or “What more do you want us to know?”

So why continue to focus on this event? As Ole Frahm says in his “Introduction” at the back of the collection, “Only one thing is certain: that we should still mourn this destruction, that we should try to understand what happened and why. And finally, we should tell these stories.” 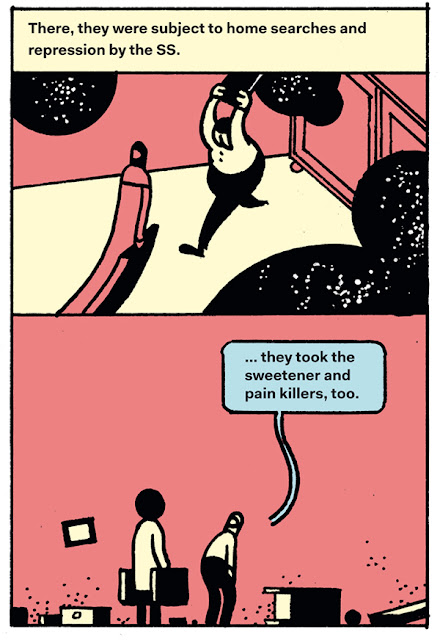 Half the people of the world have never heard of the Holocaust. Of those that had, nearly a third of them don’t believe it actually happened. As the past becomes a story, do you get to choose to believe its veracity? As the last eyewitness is gone, through who’s eyes do we witness this hideousness?

As part of their solicitation for the anthology, kuš! komikss writes that “the stories illustrate a rather unseen, forgotten or even marginalized part of our common memory and give voice to the lives of people who have not been heard before, thus offering a new perspective and better understanding of our present as well.” 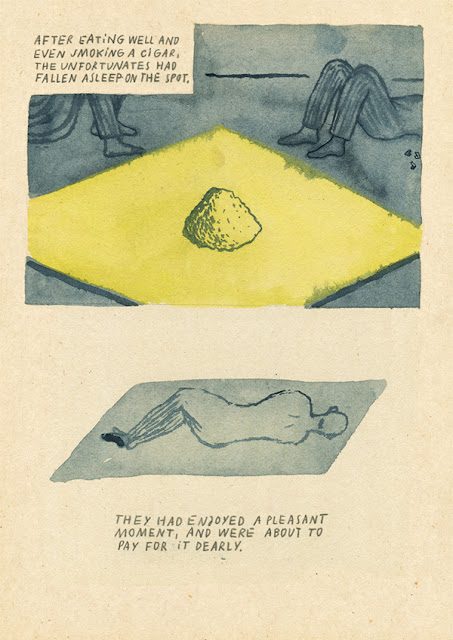 Lofty goals for a comic anthology. š! #23 lives up to its aspirations and becomes an important document in keeping the story alive, keeping it part of the narrative of what we are capable of doing to each other, keeping the fire lit to shine a light in the darkness spawned by the gathering clouds, keeping us vigilant in hopes of never allowing it to happen again.

Given the events of the recent days and the backlash it has engendered, these are not only stories of A time, they are stories of OUR time.