“I had a contempt for the uses of modern natural philosophy. It was very different, when the masters of the science sought immortality and power; such views, although futile, were grand; but now the scene was changed. The ambition of the enquirer seemed to limit itself to the annihilation of those vision on which my interest in science was chiefly founded. I was required to exchange chimeras of boundless grandeur for realities of little worth.” – Mary Shelly, Frankenstein

“For I consider that the sufferings of this present time are not worthy to be compared with the glory that is to be revealed to us.” – Romans 8:18

“Life boils down to brutality. It's fucked. Life is brutal and fucked up.” – Noah Van Sciver, Saint Cole 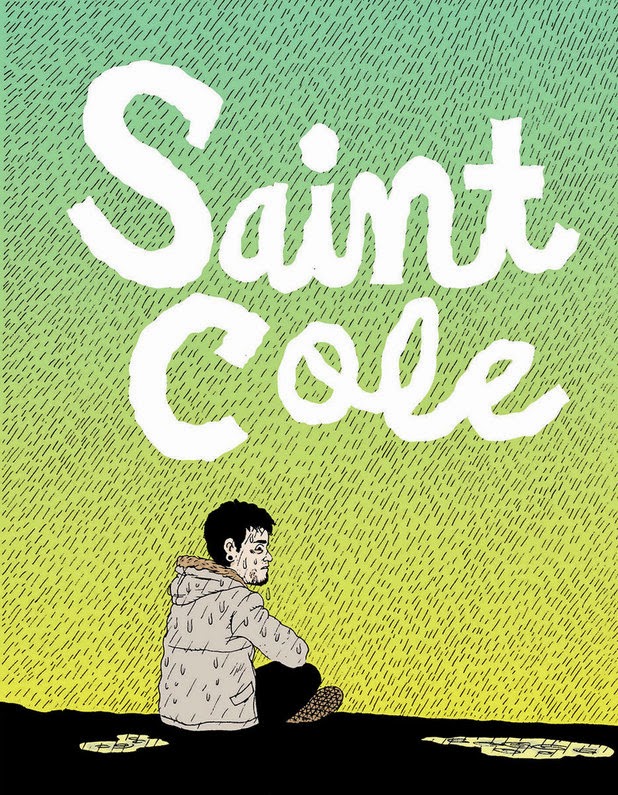 Living ain't easy sometimes. Misery, mourning, heartbreak, and suffering continue to engulf the world despite our technological advances, oftentimes because of them. The darkness of sorrow is the constant shadow cast in the bright light of joy. It's thick. It blankets. It's universal.

There's this compulsion to utter some sort of statement like, “Ah, life...” and weasel the self into the comfortable confines of the community of despondency – that warm, liquid space we tend to float in when it all gets too much, you know, to keep on keeping on. Because, yeah, life can be fucking brutal sometimes.

Have you been reading about the spate of abandoned children being found in fecal smeared houses lately? Or those homeless people being doused in gasoline and set aflame? Have you heard of the massacres in Nigeria? Have you been following the waves of horror that passes itself off nightly as news?

Fuck. It's incredible what we do to each other. The pain that people bring to the lives of others is seemingly unending.

Then, of course, there's the pain we put upon ourselves, the sharpened sticks we poke into our own eyes out of guilt or shame or some sad dysmorphia. When you slam your head against the red brick walls, the blood that gushes covers you completely. When you spend two years of your life carefully planning on how to end it, your pain is whole, it is who you are.

And even though you keep turning your head, you always end up facing something.

It's pretty fucking amazing how many of us actually make it through. 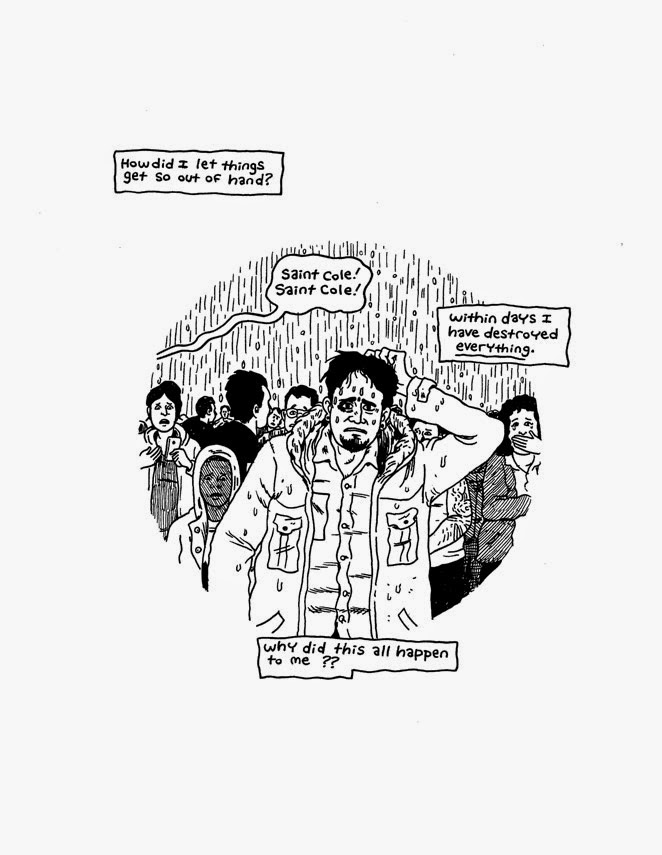 Because Saint Cole is part of the long tradition of the balladry of brutality. It sings the song of the sink hole caused by a life lived in response to expectations it could never fulfill. It's the chant you hear in the places people gather to drown out their sorrows, it echoes in the alley behind the neighbor's house whom you've never met, it rings in your own head from time to time, that is, if you are sensitive to it.

See, I had a former student call me the other day and say, “Elkin, why didn't you tell me it was going to be like this?” “Like what?” I asked innocently. “Like life...” he replied at 28 years of age, up to his eyes in student debt, working at a job he hates for people he hates even more, licking the wounds of a failed marriage, questioning what he's still doing playing this game.

What answer could I have given him?

Yeah, brother, life is hard. Obligations. Expectations. We're fed a crock of shit so often that it starts to taste like ambrosia, and it suffuses even our dreams.

We do it to ourselves all the time. We curl up our fists in response and end up only punching ourselves in the neck over and over again. And we reach out, because we've only got each other after all, to our family, our friends, our lovers to save us from self-harm. And yet even that, sometimes, ain't enough.

Sometimes the expectations and aspirations of our family, our friends, our lovers adds to or transmutes our own and the weight of that shit can be measured with truck scales.

So it is with Noah Van Sciver's Saint Cole. 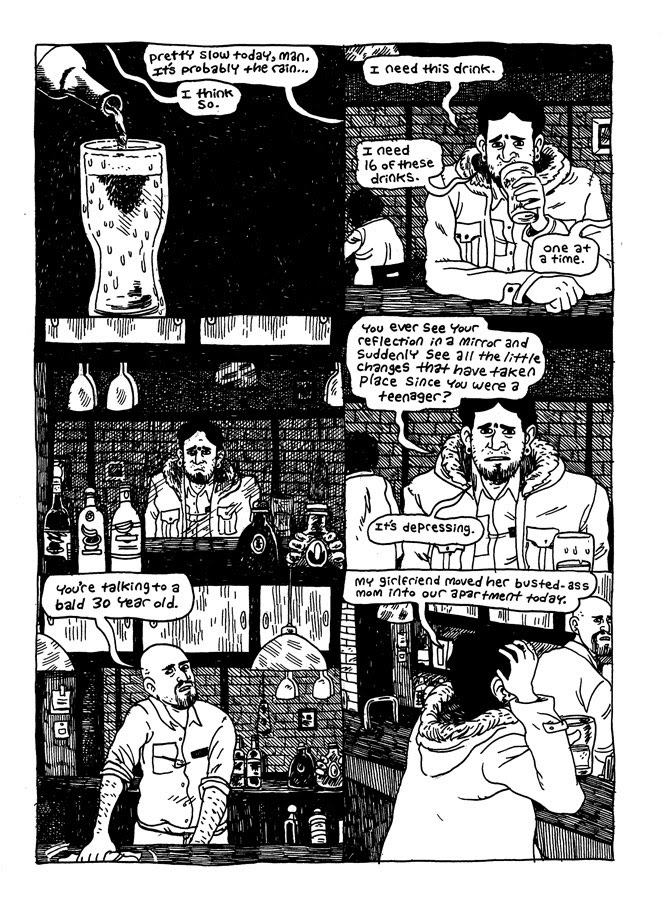 Saint Cole follows the story of the everyman Joe, saddled with a live-in girlfriend and an unplanned and unwanted newborn baby boy. It's a story of the lower echelon of society, the ever growing mass of those of us living paycheck to paycheck constantly slipping down the ladder we have been teased to climb, trying to hold on to what we have while the top keeps telescoping to the heavens and the lows are just as low if not getting lower.

When you get beaten down over and over again and that light at the end of the tunnel dims daily like it's powered by a seven-year-old Duracell, despondency becomes the constant voice-over actor narrating every aspect of your life. In Saint Cole, that's where we find Joe. And, like so many others who are caged, cribbed, and confined by the jail cell of poor choices and worse economic prospects, he turns it up to turn it down.

It's nothing new. We've seen this story of self-destruction in the protagonists of other works of fiction of this type. From Hubert Selby, Jr.'s Last Exit to Brooklyn to Darren Aronofsky's take on Selby's Requiem for a Dream, from the prose of Charles Bukowski to Figgis's adaptation of John O'Brien's Leaving Las Vegas, we see individuals make the decision to numb themselves from the confusion and the stress and the self-loathing infusing their lives in a way that is, sadly, almost inevitable. It's hubristic in its way, the choice to escape, and sometimes it becomes the final act, sometimes it becomes something else, but regardless of its end, the journey itself is brutal. 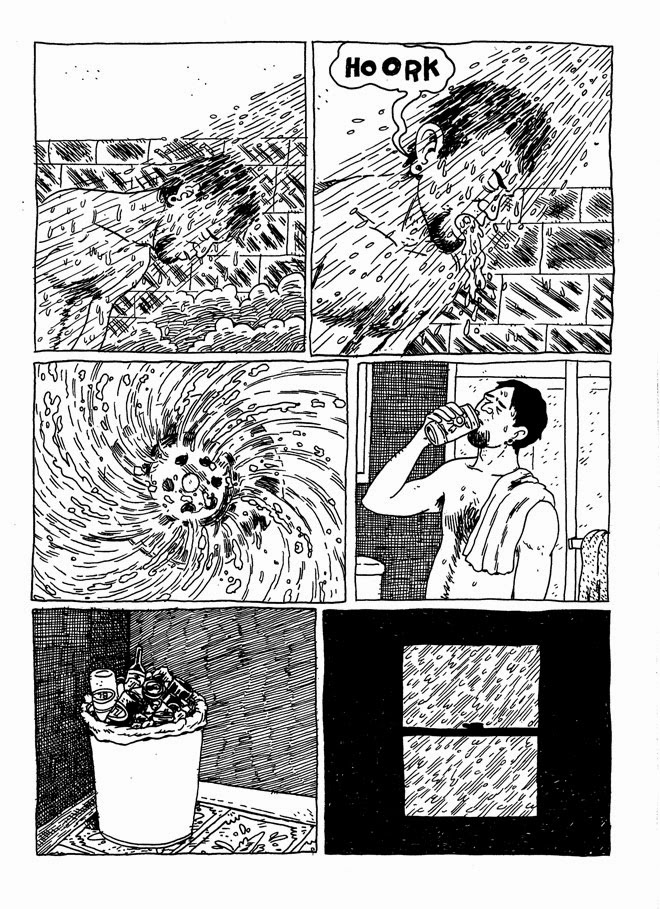 Of Saint Cole, Van Sciver said, “Sure it's brutal, but in my own experience it's not unrealistic. I know these guys. You have to work harder for less today. And when your life is like that, just a grind for nothing, you'll turn to chemicals to dull it. And you'll make rash decisions. Sorry to rant, but I get so frustrated with how badly everyone is fucked in this era.”

And that frustration is palpable in this book. Saint Cole is a downhill slope of unleashed grievance, unrelenting and unremitting in its pace. As a reader you catch your ski on a rut at the top of the run and tumble end-over-end gaining momentum as your body darkens with new bruises and blood starts to run from all the wounds re-opened in your fall leaving you searching for a bag for your teeth. And just when you think you're almost to the bottom, there are still new deep black holes in which to fall.

I keep coming back to that word. I'm stuck with it. Saint Cole is brutal. 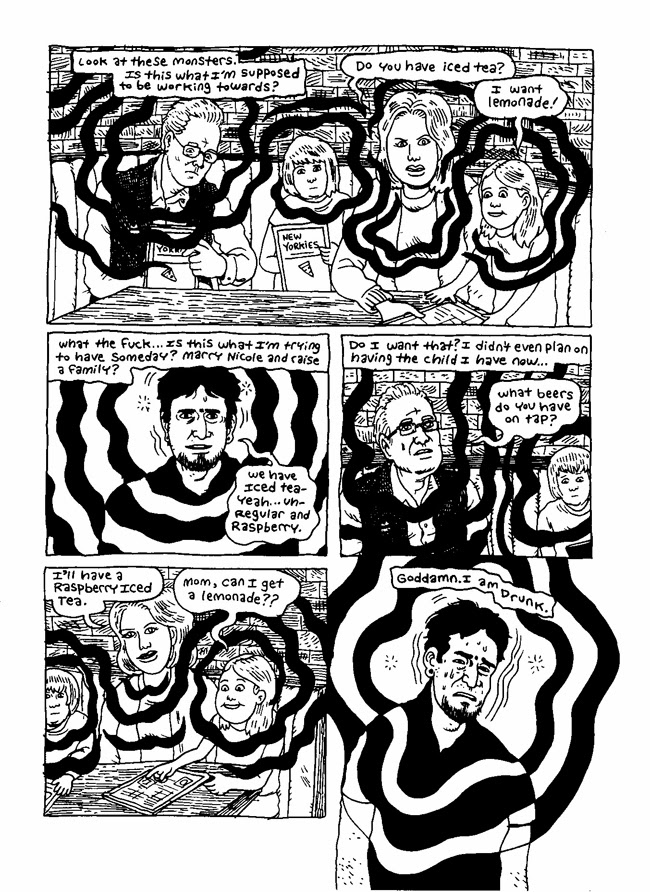 But to what end is this barrage? What purpose does it serve as a work of art other than as an opportunity for the artist to unload? Why does Saint Cole bore into my consciousness, prompt me to put aside so many other responsibilities to write all these words about it? Why does it make me want to share it with everyone I know?

Is it that “transformative power of art” – that purging of pity and fear that Aristotle was so keen on? Is it that somehow by going through this with Van Sciver we come out the other side a better person?

But really, there's little that's redemptive in this book.

Maybe Saint Cole functions as the viscous wallow instead – the comfort of “you're not alone” that makes this book such a personal experience for me? 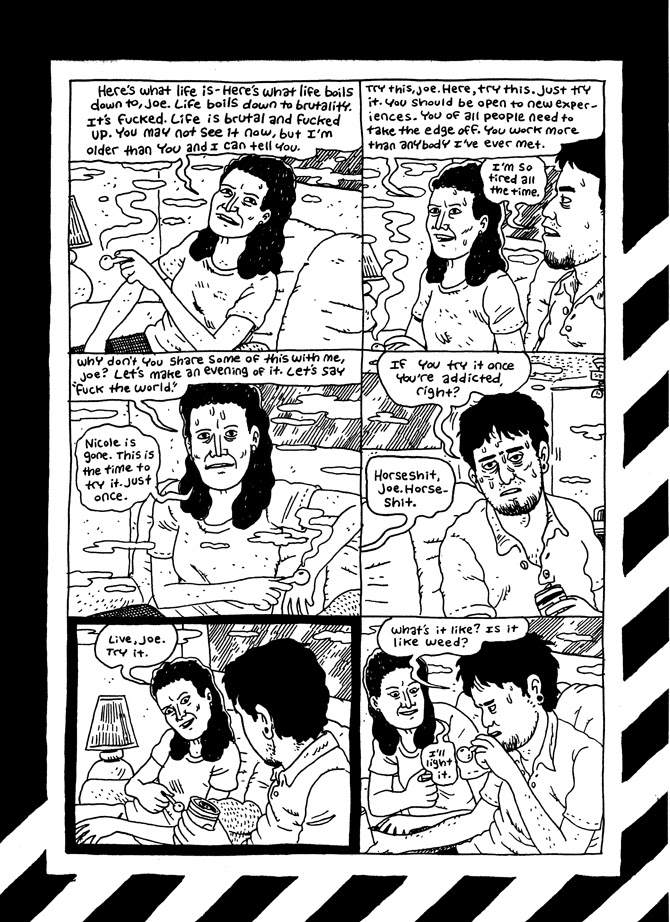 I guess I'm brought back to my earlier rumination, about the obligations of the artist to his or her art, and, maybe more importantly, to the audience.

By creating a work like Saint Cole, does Van Sciver don the hospital whites of well-trained nurse who's come to our room to help us with our pain? Is he the cardigan-wearing, pipe-smoking, belly-rubbing therapist practicing counseling with some tough love techniques? Or is he a cop in full riot gear swinging his baton with impunity at our heads as we fall to the street, tight in a fetal position.

What is the role of the artist in this situation? Does he have a responsibility to his audience? Or does the act of creation, especially one that is this purgative in nature, operate in a moral vacuum?

If a work of art beats the living shit out of you, is that the responsibility of the artist or is it the albatross of audience. When we carry our reactions to confrontational creative acts chained around our neck can we still point our finger at the creator? 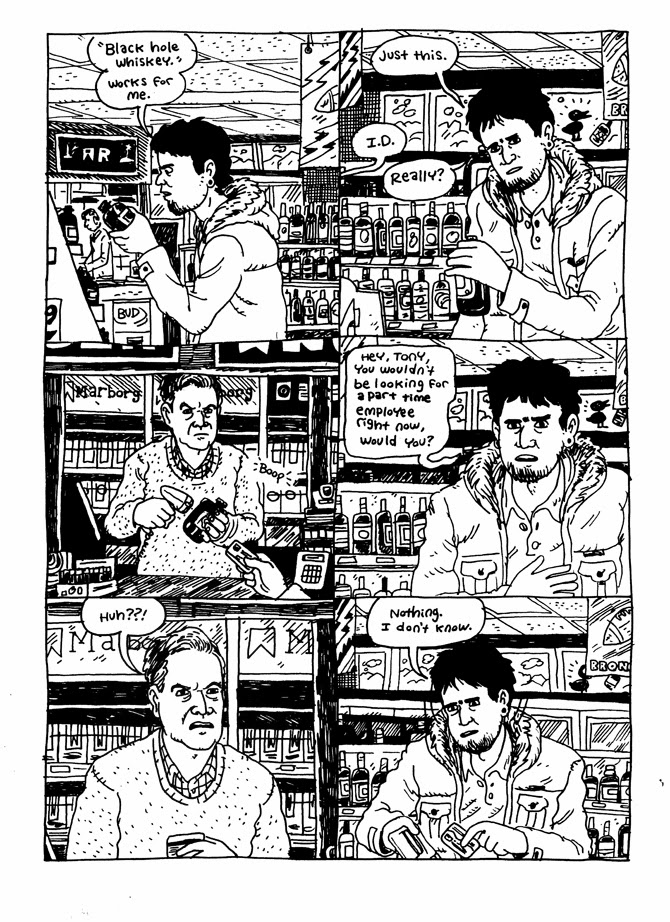 I'd like to think that in a perfect world, an artist would be allowed to create unfettered by any sort of moral compass. That the act of creation alone is a sacred thing, and that, once created, the art exists in its entirety, a thing of beauty insofar as it is an act of imagination. As it holds neither good nor ill in itself, the power is not in the piece but in our experience with it. When things go south, it's because of our apperception and all that that entails.

Doesn't that make it our responsibility then? Maybe we shouldn't hold the artist accountable at all for what they make us feel or do or say in reaction to their creation.

Then again... I began this review, or whatever this is, with a quote from Mary Shelley's Frankenstein...

I offer no answers, only more questions. But a work like Saint Cole demands this sort of debate insofar as it punctuates as it punches, illuminates as it beclouds.

Saint Cole begins with a black hole centered on a white page. On the next page a text box overlaps the hole and asks, “How did I let things get so out of hand?” The final page of the book, after everything that happens within, returns to that same black hole. Darkness is the framing device for a brutally unyielding story of a man who systematically smashes gaping wounds into his own life with an industrial-sized sledgehammer. From the sickly colored cover to the too-tight binding of the book itself, everything about this work forces you to confront some ugly truths. 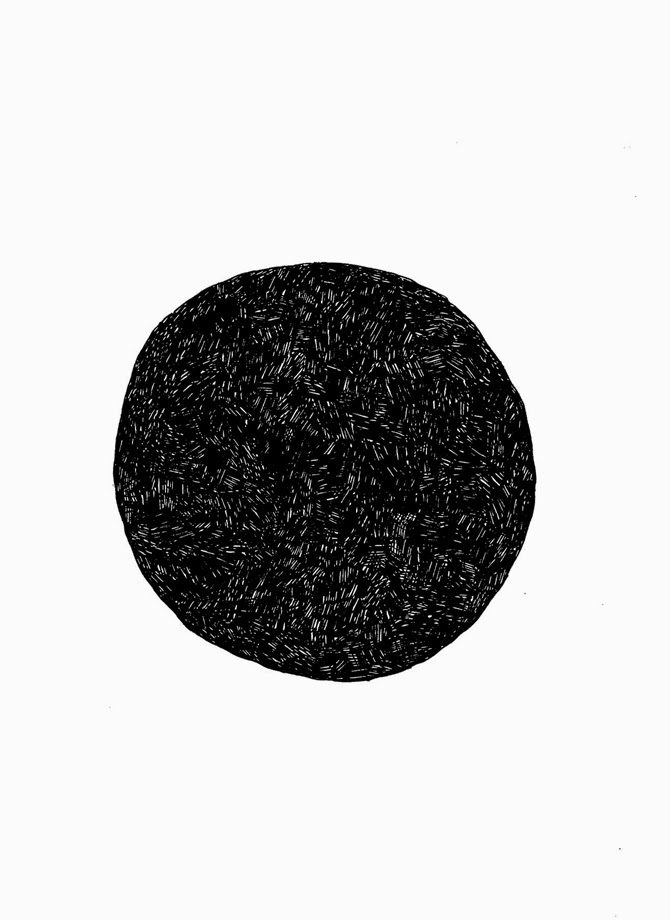 And somehow I know this has value. For some reason I cannot shake Saint Cole from my mind. I want to shove it into the hands of everyone I know, though I worry, of course, what it will trigger in them.

But then again, is that my responsibility?

Saint Cole can be purchased from Fantagraphics