Tag Team Review: 'Mixtape' #5 Gets Daniel and Jason Thinking About Mortality and Music 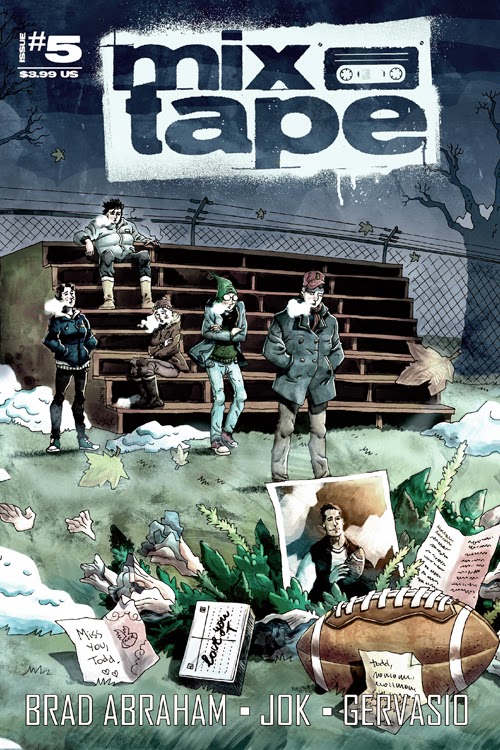 Brad Abraham, Marco Gevasio, and Jok have recently released Mixtape #5, the last issue of the first arc of this series. To mark this occasion, Jason Sacks and Daniel Elkin engage in another free wheeling conversation about the comic, the concept of identity, the fragility of life, and, most importantly, what song they want played at their funeral.
Read their previous reviews of this series:
Jason Sacks: Well, Daniel, here we find ourselves again, on the crux of yet another transition in the lives of our characters presented by our trusty guide Brad Abraham and his happy artistic companions Marco Gervasio and Jok. Our friends Jim, Lorelei, Noel, Terry and Siobhan, whose complicated search for identity and connection we've followed avidly in the previous four issues of this wonderful series, are forced to confront the worst thing any teenager can face: their own mortality. And in facing their own morality they illuminate some important insights into their own lives that also illuminate our own.
Daniel Elkin: Yeah, Sacks, the tone of issue five certainly was darker than the previous four, and Abraham, in his exploration of these characters, brings up some of the larger and more relevant philosophical questions in this book.
Sacks: That's certainly true, but before we get too deep into this story and its ideas, I wanted to ask you something I've been meaning to ask since we started reading this series: as a high school teacher, how well do you think Abraham captures the ways that adolescents think and act? The confusion and complex emotions that these kids express in this issue seem very typical to me of sensitive kids of that age, but that may be looking back over way too many years and imagining what my reactions would have been to an incident like this.

Elkin:You assume that I pay attention to how my students think...
But seriously, the characters in Mixtape are seniors in high school, that makes them, what, 17/18 years old? I spend 7 to 8 hours a day with 17/18 year olds. My experience is that these "kids" are on the cusp of their future and are totally aware of that fact. Like all of us, they can be enormously thoughtful, enormously cruel, enormously kind, and enormously complex. Only so much more so. Everything is intense, in the moment – full and rich and NOW!
Like you said, Sacks, we are far removed from that emotional intensity, what being old farts and all, but my experience with kids both as a teacher and a father still gives me some insight. I think Abraham has done a great job of capturing the "voice" of his characters.
Don't you remember, Sacks, when you were 17/18 years old -- everything was Gigantic (a big big love).  Let's have a ball.


Sacks: Yeah. Everything was Gigantic (though, my love for the Pixies came during college).
But yeah, exactly, everything was operatic and grandiose. Friendships were so important, young romance so all encompassing, that certain phone call or certain record or certain event so full of meaning.
Elkin: It seemed so important and would last forever, didn't it? Nothing could ever be that intense and nobody else could understand.... and yet... and yet..
Sacks: Well, sure, from our perspective now, none of it meant anything in the long run, but at the same time it meant everything.
Which is why the reaction to Todd Gorham's death in Mixtape #5 is so interesting.
Todd went to our kids' school but he wasn't part of their clique - not at all - and they looked down at this jock, in the way that high school kids do, and were a bit annoyed by the... apathy, I guess is the word... of their reactions.
Elkin: As the central motif, death certainly makes a statement. We've been talking liminal states throughout this series, and, as this arc draws to an end and the kids are about the graduate, I think Abraham's choice of focusing on death was the perfect choice.
It inevitably stirs questions of permanence, of importance, of identity, and self.
Sacks: In a dramatically different way than Siobhan's trip abroad in issue #4 did.
Elkin: Yea, this is a moment of reflection outside the self. Like how one of the characters starts ruminating about all the people they've met in their lives, how many more they are going to meet, and which one's stick and why do they stick? All those faces, fewer names, even fewer friendships – and how even those connections come and go, sometimes just fade away for no reason at all.
Sacks: Man, those kinds of scenes just kill me.
Elkin: Because you and I are at the age when, as we reflect, we see it as true. And if that wasn't enough, suddenly Abraham gets all Keatsian on us with his "He's always going to be 18" / “It will always be 1991 for Todd” speech.
"For ever wilt thou love, and she be fair!”
“Thou, silent form! dost tease us out of thought
As doth eternity: Cold Pastoral!"
Sacks: I gotta say, I found that speech so profoundly moving.
Elkin: Yea -- it's things we know on a deep level, but don't like to confront. It takes the honesty of youth, sometimes, to say the things we all are thinking.
And for kids who act like and think themselves immortal, an experience with death can be unnerving.