Today he and his friend Jason Sacks found 2008's Anvil! The Story of Anvil by director Sacha Gervasi. 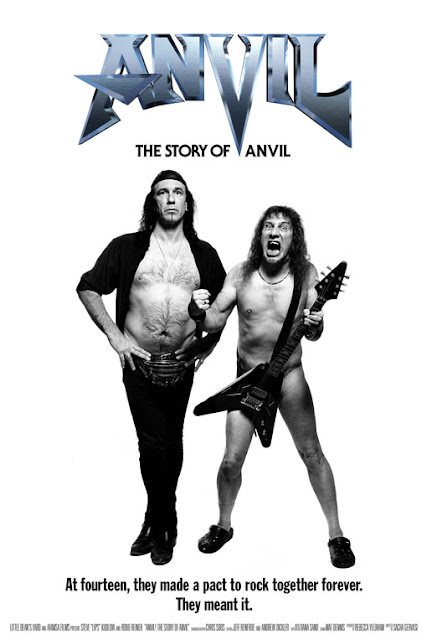 Sometimes all this isn't enough.

Anvil! The Story of Anvil is a documentary (Rockumentary?) about the Canadian heavy metal band Anvil, the band you've never heard of. The film starts with footage from the 1984 Super Rock Festival in Japan which featured headliners the likes of Scorpios, Whitesnake, and Bon Jovi – all of whom you have heard of and all of whom have healthy bank accounts – the other headlining band at that show was Anvil.

Anvil just never caught on.
As the film progresses, Gervasi follows Anvil lead singer and guitarist Steve “Lips” Kudlow and drummer Robb Reiner, two Jewish boys from Canada who formed a band when they were 14, as they talk about their past, try to figure out why they never got to the next level, struggle through their daily lives, and keep rocking and hoping and rocking and hoping.

Anvil! The Story of Anvil works on a number of different levels. The story is a tribute to the tenacity of these guys as they flail about trying to grab the brass ring that, every year, moves that much further out of their reach. The film is a cautionary tale as it shows how hard the life of an artist can be, especially in the music industry. Finally, the film is a song screeched loud and heavy over the thundering drums and wailing guitars of that aspect of the human spirit that needs to express itself out into the world, to be heard, to make ears bleed, to say “Here I Am And I've Got Something Important To Say!” 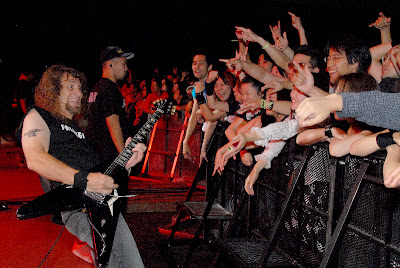 Sacks: And isn't that what we all want to say? Don't we want to tell the world that "Here I am and I've got something to say!"? Don't we want to keep fighting, keep striving, keep innovating and keep dreaming no matter how old our bodies tell us that we are and how much the lack of success and apathy of the world keeps us down?

You talk a lot about the tenacity of Lips and Robb, and that's tremendously powerful, but what really gives this movie its sense of power is the friendship at the heart of it. Throughout the film, we see the boys enjoy each spending time with each other at some points and fight like angry brothers at other points, but what shows through more than anything is the mens' love for each other. They really are brothers and we see their deep fellowship flow throughout the film. This deep love for each other is a big part of what allows the men to continue their quixotic quest for fame and fortune, as the Lips and Robb continually feed each others' ambition.

And both have supportive families too – Lips's sister, who gives the musicians money to pay to get an album professionally produced, the wives, who love the rock and roll lifestyle, and the parents who love their kids and just want them to be happy. It's all surprisingly nice and heartwarming – as you said, a couple of nice Jewish boys from Canada, one of whom mentions that he's "been taught all his life to be polite", desperately trying to break away from the grind of working at a catering business and endeavoring to create art doing the work that they love.

Elkin, were you struck as I was by the paradox of these really nice guys playing this intensely dark music? 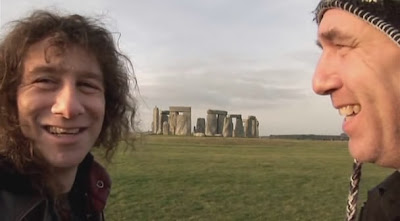 Elkin: Yea, I was struck by that paradox, Sacks, and I wondered a bit if their niceness was one of the things that held them back from success.

Then again, seeing Lips assault the bar owner who refused to pay them made me wonder just how nice these guys actually are?

Truth be told though, I'm still not sure if I liked this film or not. The whole thing kept teetering on the edge of being Spinal Tap, didn't it? The visit to Stonehenge, turning the dial to eleven, the drummer's name is fucking Robb Reiner for fuck's sake – things like this kept a lot of this film at arm's length for me. Was Gervasi mocking these guys? He has a long history with the band, though, so I don't know. Was it referential for the sake of being referential, and if so, why?

Anyway, I agree with you that the relationship between Lips and Robb was a pretty special one and really is what kept these guys going and kept the film interesting. There were times where I felt sorry for Robb for having devoted his whole life to following Lips, but then I realized that this was his choice, and, as many times as he broke away, he realized he had nowhere else to go. The other aspect of that relationship was the toll it took on Lips. Everyone is looking to Lips to figure it all out. Everyone thinks that Lips knows what to do next. That's a lot of pressure to put on this guy. As a single parent I could relate when he lost his cool or felt overwhelmed.

This is an entirely human story, and I guess this is what wins out in the end. God knows I am no fan of Anvil's music. God knows I am in no way invested in their success. Still, though, I admire these guys for following their creative urges, I respect these guys for believing and trusting in themselves, and I am in awe of these guys for their bravery for continuously putting themselves out there even though so few people are listening.

In the film, Robb shows off a painting he did of a giant anvil, like an Egyptian pyramid, that stood as a edifice to their talent and their passion. That's what it is all about for these guys. That's the artist screaming into the void. That's the enormity of the self-confidence and passion the story of Anvil comprises. 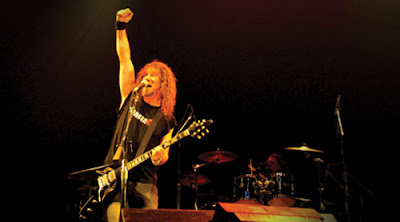 Sacks: Yeah, what makes this movie so compelling to me isn't the music that the men play, it's the tenacity that they bring to pursuing their dreams. These are men who absolutely refuse to let go of their artistic vision; no matter whether they're completely flat on their ass broke, can't afford a good album producer, or are playing to crowds of a half-dozen people. They love what they do and that glee and delight shines through with every frame of this movie.

But you're also right about the Spinal Tap-type elements of the movie, and the men – I keep wanting to call them boys and perhaps that's appropriate – the mens' often feckless glee is both charming and frustrating. I wanted to see them succeed, but at the same time I was a bit surprised by the amount of support that Lips and Robb's families give them. Nobody pressures the men to grow up so they seem to be in a bit of limbo, neither adolescents nor fully fledged adults. In some ways they almost feel like caricatures of themselves, 50-year-old men acting like kids in their early 20s. Isn't it time to move past childish things on some level?

I guess I sound pretty judgmental of Lips and Robb here, and that's really kind of inappropriate. I don't know the men. I have no idea what their lives are like outside of this documentary. I'll likely never meet them. Maybe they have found the balance of adulthood and youth in their lives that makes them truly happy. And maybe their families support these men in part because they simply love and trust them to make the right decisions. But the elements of self-parody are certainly there in the movie. They're impossible to miss. And they gives this movie a bit of an edge that both distances us viewers from the Lips and Robb and connects us closer to them.

I can't help but compare Anvil! with the documentary that I think we've enjoyed the most in this series, Senna. In Senna, the documentarians performed the amazing act of allowing viewers to connect with Aryton Senna behind the mask. Somehow that film allowed viewers to see into Senna's soul and gain insights into him, his ambitions and the decisions that lead the race car driver to meet his ultimate fate. We don't get that same level of insight here in this movie. It stays on the surface of the world of Anvil. The insights we get when watching this documentary are entertaining and fun, but in the end are less satisfying than the level of insight we got from the other movie.

I liked these guys a lot, and wish them all the success in the world. but I'm not going to go looking for Anvil's music on iTunes now…

Elkin: There's a problem with 50-year-old men acting like kids in their early 20's?