Sweet begeezus – First off, how do you do a comic book adaptation of a movie that was never made? I mean, what sort of parallel dimensions does this open up suddenly? It seems this would suck all rational thought right out the chute and into a tight leather outfit – BAM! 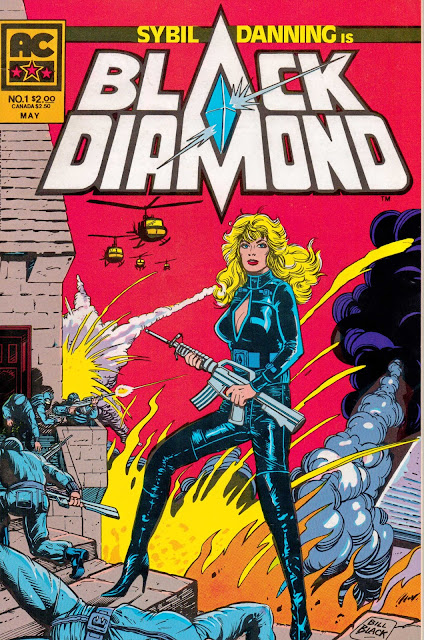 I'm talking May 1983's Americomics release of BLACK DIAMOND #1 – Sybil Danning is Tianna Mathews is Black Diamond created by Mike Frankovich, Jr. but written by Bill Black and Don Secrease. You got that? Seriously? It's a hell of a monkey barrel to ride over the falls, I'm telling you.

Sybil Danning? That hot blonde featured in films such as Battle Beyond the Stars, Chained Heat, Reform School Girls, and Howling II. In 1983 Sybil Danning was the woman that you pictured in your head when you thought about those kinds of women.

This time, though, Sybil Danning is BLACK DIAMOND. But she's not. The premise of the comic is that BLACK DIAMOND was going to be a film starring Sybil Danning, and Bill Black from Americomics jumped on the bandwagon as hard as he jumped the gun and put out this comic book adaptation of a movie that never got made, but it was marketed as an adaptation of the film – which never existed – but Sybil Danning was going to be in it and she provided a photo of herself in all kinds of fetish black leather kink spy thriller crotch zipper high heeled glory – and that's enough to launch a franchise if you ask me. 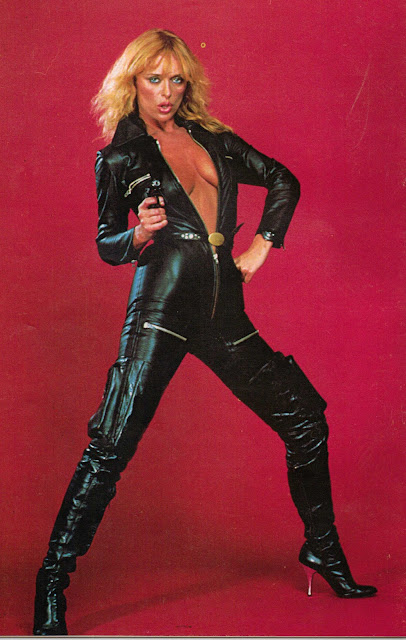 What we are left with, floating around in the bargain bin, is this totally wonked out crank-snorting cluster-fuck comic book. It is Americomics' Ode to Joy. Before I go on any further though, I just have to get this out of the way:


OK – now I can talk about this book.

“To the world at large Tiana Mathews is involved with MULTMONDE in the glamorous world of international high fashion modeling. Beneath the glitter she is in reality an agent for INFOCOM THREE. Her jetset travels provide the perfect cover for the beautiful but dangerous lady spy!”

Bring on the BLACK DIAMOND! 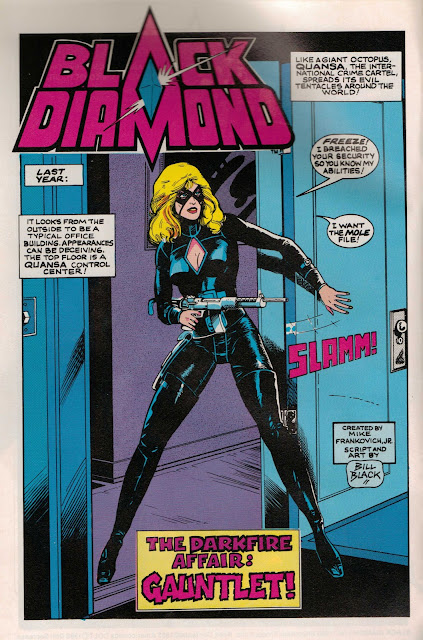 You can't help but love this comic book. This thing veers out of control before all four wheels even hit the pavement.

We start with a flashback which leads to Black Diamond discovering that her lover is her enemy so she has to terminate him.

Which then brings us to the present where Black Diamond takes a shower and is subsequently informed that an organization named QUANSA, the sworn enemy of INFOCOM THREE, is up to no good. They've sent their Valkyrie Unit, led by Vanessa Cord (a.k.a. Darkfire) to New York for SOMETHING BIG! 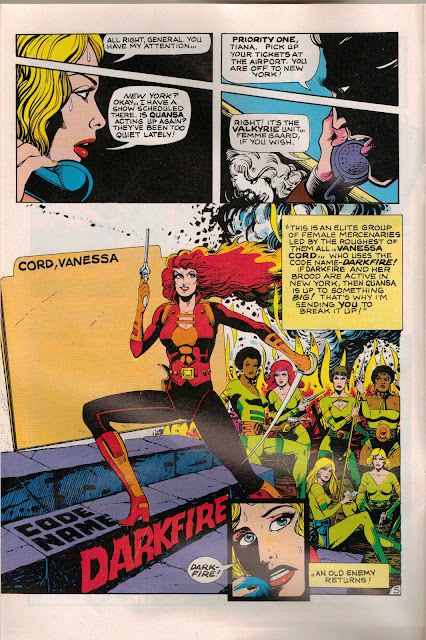 Black Diamond leaves her hotel room in Austria to go to the airport. As she is about to get on the elevator, she is shot at!

Escaping this bit of business with a well heeled crack in the face, Black Diamond goes to the airport where she is attacked again.

At this point the whole thing starts to collapse upon itself like those stories the toothless guy sitting next to you at the end of the bar tells where first he is stopping Lee Harvey Oswald from teleporting to the NASA Space Center in Houston, then suddenly he is aboard the Hindenburg trying to stop Frau Lederhuffen from lighting her cigar with a match made from the shin bone of Justin Bieber's first grandson.

Black Diamond defeats these ladies and gets on the plane to New York. Sitting on the plane reminds her of a similar flight some months earlier where she confronted her lover (remember him) about his double cross and shoots him with an Anesthetic Dart and plants evidence on him that, once he authorities find it, will make him wish she “had used real bullets.”

You know that sound the kittens make when you drop them from the third floor of your office building and they land in the pool of vanilla soft serve ice cream you left in the parking lot? That's the sound my brain started making as I kept reading this comic.

And it was awesome!

It's obvious that Bill Black and Don Secrease could give a flying fuck what you think about their abilities as storytellers. These guys are spreading the cheese on their own thighs here and are loving every minute of it. If you can put aside your own aesthetics and sense of structure as you read BLACK DIAMOND #1, it becomes one giddy Snuffleupagus of fun!

Anyway, her reverie over, Black Diamond makes it to Manhattan and the offices of INFOCOM THREE where she has a video conference with “the image of General Leon Van Pelt … Assignment Coordinator for INFOCON THREE” 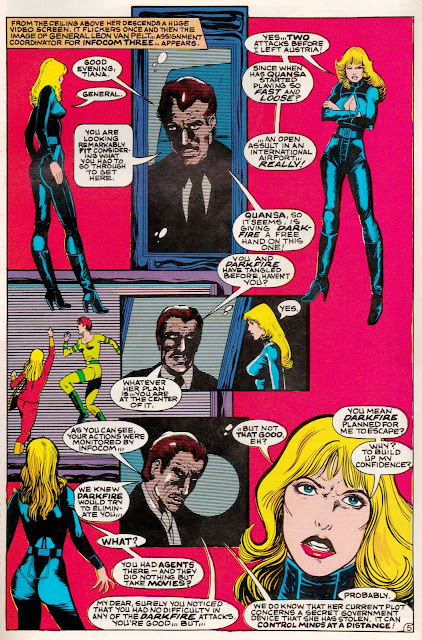 I have no idea what happens next. Black Diamond goes someplace and gets to kick some more lady booty. 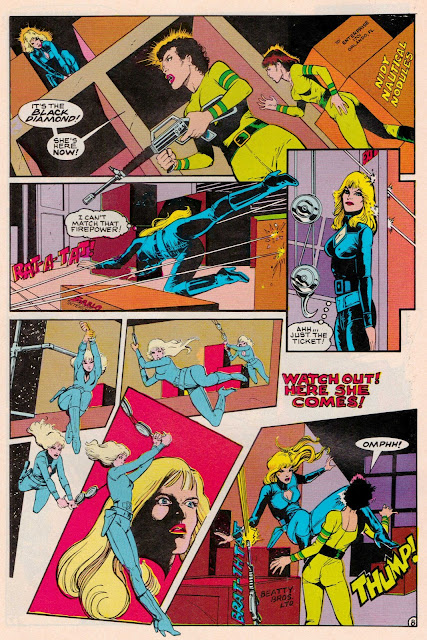 WATCH OUT! HERE SHE COMES?


See how much fun this is?

I kept having to put this comic down and run a lap around my apartment complex because reading it kept getting me all googly giddy. And I mean seriously googly giddy.

Then – whatever. There's this thing with Darkfire having mind control powers at the end. Apparently Darkfire is going to use these powers on Black Diamond so she will become Darkfire's “Agent of Destruction” and will “ANNIHILATE INFOCOM THREE!”

But before she does this, Darkfire informs Black Diamond that the warehouse is wired with explosives and tries to blow her up to see how well she performs.

Of course this makes no sense – but why should it? It's BLACK DIAMOND #1, baby, and if they want to blow up a warehouse I say LET THEM BLOW UP A WAREHOUSE! 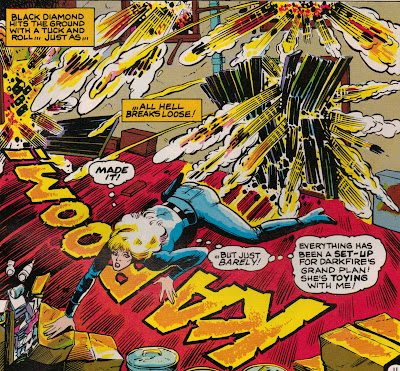 In the end, Black Diamond vows to defeat Darkfire, and we get a tease for the next issue. 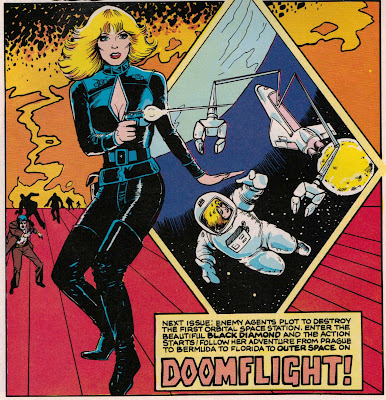 That's right – from Prague to Bermuda to Florida to OUTER SPACE!

Man, what a movie this would have been. Can you imagine the majesty of it? The scope of it? The action? The insights into the human condition?

But, like I said, there was no film. Just this comic.

Apparently there were five issues in the whole BLACK DIAMOND series. If they are half as fun as issue #1, then they are twice as fun as anything DC or Marvel is putting out nowadays.

I mean, seriously – this book made no sense and loved every minute of it. It's like a fourteen year old boy lying crotch down on the floor watching Olympic Beach Volleyball. It is a true adventure entertainment excitement melange! With whipped cream AND a cherry on top!