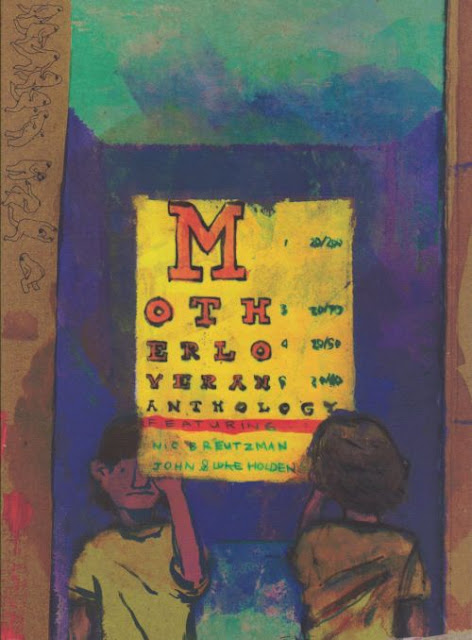 Breutzman contributes two comics to this anthology, "Photograph" and "You Can't Be Here," both of which are stories of individuals attempting to make connections, either with other people or places. Breutzman's stories occupy relatively quiet environments which are cascadingly familiar, both the urban facelessness and the empty suburban. But it is the interactions, the desire to connect, that spawn that weird and uncomfortable sensibility that pervades this anthology.
In "Photograph," Breutzman plays with time as much as he does with expectations and, by doing so, sets up this constant disconnect as his characters reach out to each other. In "You Can't Be Here," Breutzman expands his bag of tricks to include a dream-time which furthers the reader's sense of the alienation. There is also an undercurrent of violence that adds sauce to the sense of the weird and the uncomfortable.

In the introduction to Motherlover, Rob Clough says, "There's a bleak beauty in Breutzman's unsparing vision, a grim understanding of how things really are and the ways in which we try to conceal this truth."
Breutzman's two comics bookend "The Boys" by John and Luke Holden. This comic is not only the heart of the anthology, it is also the heart of the weird and uncomfortable. It is suburban tale of young boys trying to escape the inevitable boredom engendered by life in a small town suburban setting and it locates its tone in its scrawled art, intertwined panel placements, and , most importantly, the bile inducing color palate chosen by Raighne Hogan. There is horror in these pages, but it is profoundly human horror bred from the crossroads of a young boy becoming a man. The drive of the narrator's proclamation, "I need to see pussy tonight" is juxtaposed with fear and, of course, the weird and the uncomfortable.

And "The Boys" is weird and uncomfortable, but it makes sense, especially to a man who spent his boyhood in that pre-internet, suburban malaise that this comic inhabits where puberty pushed our actions to interesting places and we bonded with each other in our terror of what was happening to us. The Holden brothers get it right, because all of that was weird and uncomfortable, and there was nothing "ironic" or "hip" about our confusion or our desires.
Motherlover is neither for the weak nor is it for those who need their entertainment served up in sugar-coated morsels. It requires you to feel uneasy as you relate to its contents. It requires you to confront you unconscious awareness that no matter what we want to believe, the world is weird and the world is uncomfortable.

You can order a copy of Motherlover and find out more about what is going on at 2D Press over on their website.
And here's the Kickstarter video they made to get this thing funded: