A Moment or Two for You (and Lou) 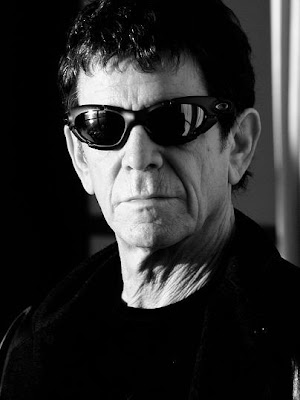 My particular personal pantheon is larger than some -- smaller than others -- but it is what it is -- and it is -- because I have keyed in tightly to the myriad of aspects that float in front of our faces, daily, incessantly, ubiquitous. These seeming dots before our eyes, dust storms, light dances, you get to choose -- are all discordant, seemingly random, rudderless in every intent, yet all aspects of one.

I know. It sounds as if it were time to launch into a Whitman poem, or a Cole Porter musical number. but this is neither the place nor the post -- for it is time once again to talk about Lou Reed.

Meanwhile, I should know that I am wrong every time I try understand.

And Lou is my guide.

I've told this story before, but it demands reiteration:

What do you expect from me now after something like that? How could I ever listen to Rush again?
What meaning could there be in everything that I thought had meaning before?
Why bother even wearing shoes anymore?


Nothing -- NOTHING -- in my life had prepared me for an experience like that -- damn you Lou for breaking me open.

Later there was "The Blue Mask" an album of highs and lows -- the title track being the most honest assessment of how pathetic and self-deluding and mud covered we are. Every time. All the time.

And I noticed it was true, but had to push it away, and I pushed it away some more -- it is only later after a series of poor choices again and disregarding people in my life, again -- I saw my Blue Mask in the mirror.......

And it slowly disappears. We forget. Move on to shinier things and odd goat dances in the meadows.

And we are doing it again -- those things that make us base -- and there is the Blue Mask. Under the shiny things. Orchestrating the goat dances.

Lou is there to point the finger in your face. To open your eyes. To peel away the layers.

But he doesn't notice what you do when you finally understand. That's not his holy role.

If you want, I can make you a sandwich. It will be tasty and you will be glad to eat it. Get comfortable: slacks and slippers, sweaters and socks. Breathe Deeply and Let the Tension Ooze out of your toes. Now let's listen to "Black Angel Death Song" and see where you go.