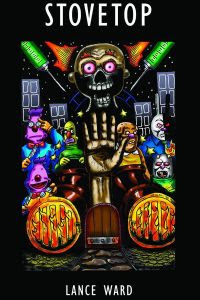 This Review Originally Ran on Comics Bulletin
Jamil: Alright, Elkin, let's journey through the rabbit hole. I'm sure you got the complimentary LSD that came with Stovetop, and we should be just sober now enough to examine this creative look at the nature of reality through the eyes of Muppets.
The extremely animated, almost familiar, world is what popped out at me at first. Despite the characters being little clowns and muscular rabbits I felt pretty comfortable in Stovetop even in all its weirdness.
Daniel: Comfortable is not a word I would have used any time during my reading of Stovetop, Jamil. I kept thinking the book was going one way, be it a commentary on the creative process or an exploration of the nature of the self, but then it would zag out on me and take me someplace else entirely, all at this frenetic pace, almost as if Lance Ward had eaten the acid before he began and was hallucinating this whole thing as he was creating it.
Not to say that is necessarily a bad thing, mind you, because somewhere in this book, I think, lies those moments of abstract profundity that acid gobblers tend to reach (only to forget about or discount entirely when they come down). But it seems to be a wandering and winding road that Ward makes us sprint across to reach that other side.

Jamil: You are hitting on my main qualm with the book: it has some huge ideas but stumbles pulling them together. The narrative arc on this thing is erratic, with Little Ern going back and forth to locations and two big perception altering twists that don't really mesh with each other. Ward leaves the reader in the dark for much of the comic, which is a decent effect, but falters when Ern finally breaks out of his world and into the real one. The exposition barrage in the middle is on par with the Architect scene from the second Matrix movie, and had me a little uneasy by the end.
Walking, talking puppets? Sweet. Fresh nightmare material.
Daniel: Yea, no kidding. I woke up in the middle of last night convinced that Doober was coming after me with his razor.
There is a part of me that thinks the reason I liked this comic to the extent that I did was because I either really, really wanted to like it, or I was being forgiving because of what I hoped Ward was attempting to do.
The whole experience of reading Stovetop was like drinking seven shots of Ouzo and trying to balance on a log over a pit full of hot tar -- which can be exciting for some people and does carry a certain experiential charm. Ward's art adds to this balance issue with its mixture of finished and unfinished in almost every panel and the erasure marks in the word balloons. I kept wondering if this was done for effect (probably) or as a result of the high-octane rocket fuel that the book's pacing engenders -- like Ward had to get this book out before he crashed and then realized the whole of his labor of love was bollocks.
Still, there is enough in Stovetop to keep me wondering about it. I keep feeling like I am missing something, that somehow I am the puppet here and Ward has his hand up my ass (metaphorically, of course).

Jamil: Oh! That was your ass. I'll take my hand back now.
I know what you mean on the whole "missing something" aspect. I love when a book takes a chance, I hate when it doesn't do the ground-level storytelling work every piece needs. There are some inspiring, powerful thoughts here, and the comic is pulsating with meaning, but the constant state of wackiness does not provide a solid foundation. None of the characters seem real, I mean they aren't, but even for puppets there is a lot of hollowness to Stovetown.
What exactly is the commentary here? Or is just a bunch of absurd, "holy crap" moments strung together? Do we pay attention to the characters that look like Bert and Ernie or to the white rabbits (obviously an allegory to Watership Down,...right?). Why do the rabbits run everything, and how did they make the puppets come to life? Does it matter? And, yeah, the blotchy lettering is extremely peculiar.
This comic reminds me of two things. The first is Bugtown by Matt Howarth, something a co-worker slapped on my desk last year and sticks with me as a comic that is clearly out of fucks to give and does its thing without regard. The second is something you touched on, Dan, the "get this book out" mentality. It reminds me of my own writing, where I blast something out and refuse to go back and edit it for a myriad of reasons, none of which are good and generally boil down to laziness. I think Ward birthed this thing in one specific state of mind. Our foreword only states a single thing about the creative process -- "created by Lance Ward during the brutal winter of 2010-2011 this is a work of fiction." Cabin fever is a powerful thing. It's probably what led to someone discovering what else bath salts could do.

Daniel: I know from cabin fever -- I lived in Minneapolis for a number of years (apparently Ward lives around there too). During that time I produced some rather odd art that I subsequently felt obligated to bury in the back yard during the summer months. Then again, in Minneapolis they have liquor stores that deliver.
So yeah... in this book, who do we as readers get behind? Ern is the narrative center, but so little time is devoted to his development as a person (ummm... puppet) that his plight is hard to empathize with except in very broad and easy strokes. The rabbits? All we know about them is that they "mysteriously … showed up". They are obviously supposed to be the oppressors in this story, but their exact motivation is nonexistent or shoved under so many layers of interpretation that, because the pace of the book gives us no time to reflect upon, remains an enigma.
I'm usually pretty good at sussing things like this out. Stovetop gives me little to go on.
But still... something about this book keeps me second guessing my every thought about it. Perhaps this is what Ward intended. Perhaps its some sort of game he is playing: putting in just enough stuff to make us think that there is a thematic center to this tale, but in actuality he is making a puppet show out of all of us -- "thin legs would appear and the puppet would take on the personality created for him."
Living in this state of uncertainty is certainly causing me to have a very strong emotional reaction. In this sense, I guess I could say thatStovetop is a successful work of art. But to what end, I ask? If it is just designed to make me uncomfortable, then it succeeds, but what does it add to my life?

Jamil: Indeed, what is the intended purpose of the piece? Did Ward just throw some ideas out there willy-nilly, hoping to muster some type of significance with readers, or is he fucking with us? I think you'll agree, there's an underlying impulse to give this one of those "piss-off" 1/5 star ratings because it feels like the creator is spinning us around in circles for the hell of it.
However, I didn't give it that, neither did you, and really, Stovetop is a solid creator-owned book that opened some sections of my mind that have lain dormant too long. It does make you think on several different levels and really evoked a certain set of memories from my childhood. Using characters who look like they just wandered off the Sesame Street set is an inspired touch, really giving this it's best footing and offering the reader a launch pad in trying to figure this bitch out.
The setting's familiarity is where some of my aforementioned "comfort" comes from, but I have to pull an about face on that one becauseStovetop is in no way a work that makes you feel at home. The cold, scratchy world, the oppressive overtones, the weird puppet terrorist with the exploding dolls -- it all culminates into one weird fucking comic, and that might be what I like most about this work. It's out in its own stratosphere, and continues floating into space with no intention on coming back to Earth.
Daniel: Amen.  And anyway -- really -- who doesn't love puppets?

You can buy Stovetop directly from Creator's Edge.