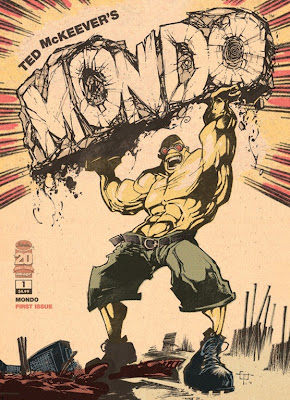 This Review Orignally Ran on Comics Bulletin
Ted McKeever has been making comics since the 1980's and he can always be counted on for keeping it weird. His new Shadowline/Image Comics mini-series, MONDO, continues in that tradition, this time in a Golden Age format featuring glorious black and white art.

Catfish Mandu radioactively enhances chickens at a poultry plant. He appears to have some guilt about this. When the inevitable poultry accident occurs at the plant, though, Mandu becomes Mondo, a hulking behemoth coursing with power, and who knows what the hell is going to happen after that. Whatever it is, though, let me assure you that it is going to get weird.

Chickens have always slightly unnerved me and I know I'm not alone when I say this. It's something about their jerky head movements or beady eyes. They always seem to be watching you, waiting to leap for your face and do ungodly things to your soul. McKeever capitalizes on this sensibility throughout the first issue of Mondo. His thick black lines, wonky perspectives, and constant stylistic changes kept me riveted and off-kilter as I turned each page. I knew it was all leading someplace, but never in my wildest dreams would I have thought that it would end with a.... well, you just have to read it.

In this first issue, McKeever sets up Catfish as the everyman. He is silent throughout this issue, except for uttering the occasional “B'Gok!” He is constantly tormented by his fellow poultry factory workers, and his landlady (rendered with wild hallucinatory styling) hassles him for not making any noise. Catfish is also haunted by a lone chicken which may or may not actually exist, and which bestows upon him the gift of an egg. This egg grows in importance by the end of the issue. 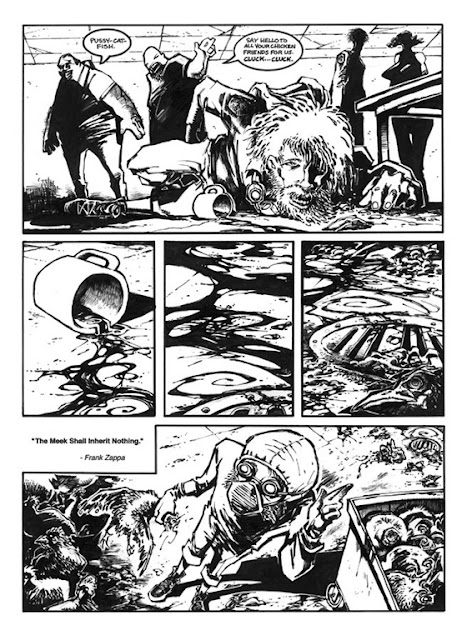 But the story doesn't just focus on Catfish. There's also another character named Kitten Kaboodle whose initial exploits as she roller-skates through the desert also have to be seen to be believed. Let's just say that McKeever is not shy about his violence and the whole scene would be gratuitous if it weren't so wild and somehow strangely apt. 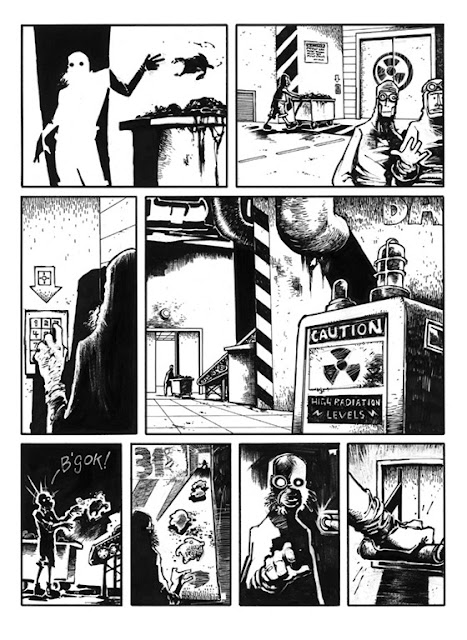 Mondo #1 is just one of those comics that demands your attention. It throws you cartwheeling through your sense of reality, and keeps you turning the pages. McKeever is in fine form once again on this series. I have the feeling that this is going to be one of those revenge fantasy stories that ends up being a political statement of profoundly philosophical importance. Either that or just a good old fashion mind-fuck of a wild ride. I don't know whether to strap on my thinking cap or belt on my ass pillow, but either way I can't wait to see the next issue.