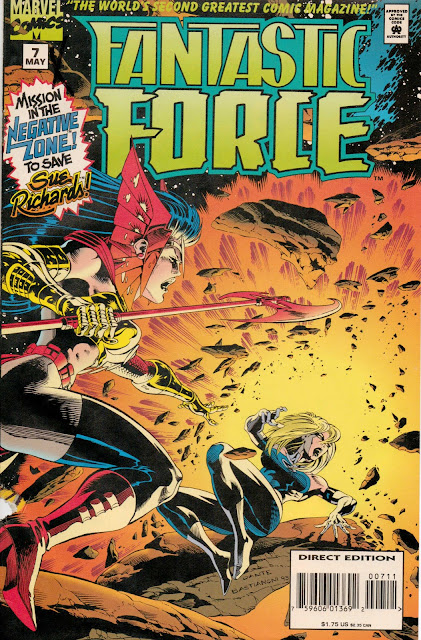 I THINK I LEFT MY STOMACH IN MY OTHER PANTS!
In May, 1995, 35-year-old unemployed plumber and U.S. Army veteran Shawn Nelson stole a M6O Patton tank from the US Armory in San Diego and went on a rampage. He destroyed cars, fire hydrants, and an RV. Then the police shot him dead.

Die Hard With a Vengeance comes to theaters in May, 1995.

Sega released the Sega Saturn console in North America in May, 1995.

Matlock, Blossom, AND Full House are all canceled in May, 1995.

As a proponent of writers respecting the intelligence of their audiences, I will leave it up to you to make the connection between these seemingly disparate events (you're welcome). But, before you do, let me just add one more piece to this puzzle.

In May of 1995, Marvel Comics released Fantastic Force #7.

As I have mentioned many times before, I had all but given up reading mainstream comics in the 1990's. Fantastic Force #7 is ANOTHER example of why that was.

A matter of fact, I had no idea there even WAS a Fantastic Force. Ever. And there is still a chunk of my soul that wishes I had never gained this knowledge. I'll explain that shortly.

I'm shooting from the hip here, but my assumption is that Fantastic Force was cobbled together out of that same sort of Teen Titans/X-Men/Youngbloods marketing brain aneurysm that seems to be a pop culture standard: “How do we stay relevant, hip with the kids, and able to tap into the demographic with the highest disposable income?” Make heroes out of teens! It's a gestalt that has brought us such wonderful things as Menudo, Teen Mom, Matter-Eater Lad, and Jim Shooter.

Quality stuff, all of it.

But this is a discussion for another time. I've got a bargain bin comic to concentrate on right now: Fantastic Force #7.

So my first question is, who are the Fantastic Force?

You can tell a lot about the quality of a comic by the effort the creators put in to coming up with the names of its protagonists. Psi-Lord, Huntara, Vibraxas, and Devlor? Oh my.

And then, of course, there is the background story. This is from Marvel's own Wiki :

Seeking a cure for his grandson's fluctuating powers, Nathaniel Richards kidnapped young Franklin from his parents, the Fantastic Four's Reed and Sue Richards, and took him to Warlord Kargul's Elsewhen dimension. Kargul's blacksmiths forged a suit of armor for young Franklin, allowing him greater control of his powers; he then spent years training, eventually becoming Psi-Lord. Nathaniel had also brought his daughter Tara to Elsewhen and she received special training as well, becoming the great warrior Huntara. Appearing before his parents seconds after he had been taken as a child, the adult Franklin attempted to prevent his mother's return to her Malice persona--previously created by an artificial Hate-Monger and given substance during the Infinity War--by absorbing it himself. Later returning to Elsewhen to petition Kargul for help in defeating the evil Dark Raider (an alternate Reed Richards from Earth-944), Psi-Lord, joined by Huntara, instead was forced to fight their way out of the dimension. Psi-Lord infected the Dark Raider with the Malice personality, then watched as Aron the Watcher, posing as Uatu, banished the Raider into space. When the Fantastic Four disbanded, Psi-Lord and Huntara, hoping to continue their family's legacy, joined with the young Inhuman Devlor and Wakandan hothead Vibraxas as the Fantastic Force.

Got all that? I think you're now ready to come along with me on the Magic Carpet Ride through Fantastic Force #7. 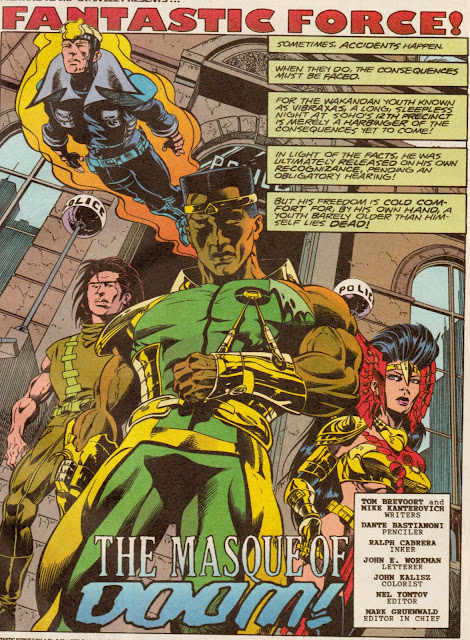 When the first words of a comic are “Sometimes, Accidents Happen.” it really primes my pump for loathing. Brevoort and Kanterovich are already apologizing for this comic before it even begins (yet, in that clever Reaganesque use of the passive voice, deflecting the blame from themselves – well played, sirs).

So Vibraxas has killed a guy in self-defence and he's all butt-hurt about it. Huntara rubs it in and Devlor uses it as an excuse to distance himself more from Vibraxas. This is character development, people. Pay attention!

The team heads home, and we get this scene: 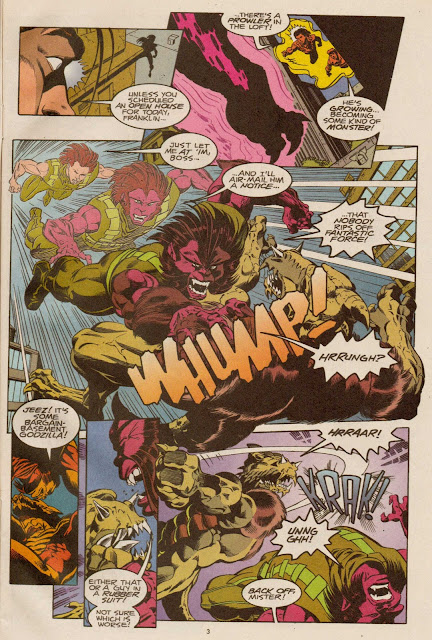 It turns out that the intruder is none other than “Lyja, the bride of the Human Torch” (her words not mine), who tells the team this whole story about how she and the Human Torch are no longer a couple, but she's been stalking him in the guise of Laura Greene (“in the hope of effecting a reconciliation” – her words, not mine – and kinda creepy). She and the Torch were on an archaeological dig when the “flaming apparition of Susan Richards materialized” to warn them of danger. This heralded the disappearance of the Fantastic Four (not Force, Four).

Just as Vibraxas starts to question her, this same flaming Susan Richards appears before the team (how convenient) to tell the Fantastic Force that they must save the Fantastic Four on the moon.

The moon. Of course.

Just as the Fantastic Force is about to head to the moon, Huntara asserts herself. 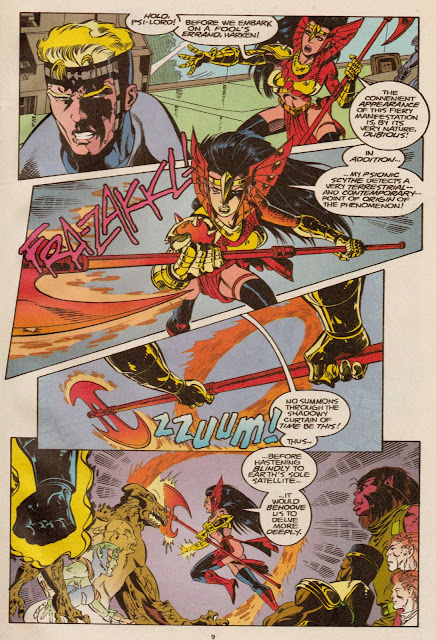 A quick note about Huntara. While it is refreshing to see a strong female character in a comic, it is beyond me why she has to be showing so much of her ass while talking like that prodigious home-school kid whose social awkwardness manifests itself in an extensive vocabulary and the inability to read social cues. Complex characterization or cliché driven laziness? You decide.

She does use the word “behoove,” though, which does make her kind of sexy.

Still, thank goodness she has a Psionic Scythe. Not only is it convenient for figuring things out and an easy device to forward the plot, but it is also awesomely alliterative.

The Scythe takes them to the source of the flaming Susan Richards, Latveria – home of Dr. Doom. The team beats up some Doom-bots (de rigueur in a Marvel Comic), looking for Doom himself.

As an aside: if there are any comic creators reading this column right now, why have we not had a Doom-bot comic? Think of the possibilities on this one. I'm just sayin'.

After carving through the Doom-bots, the team finally gets to confront their true nemesis. 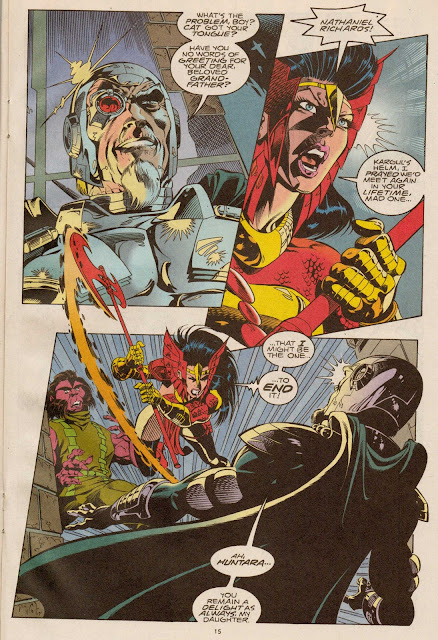 It's not Dr. Doom at all, but Grandpa! Nice little Shyamalan there, Brevoort.

Apparently there are some family “issues” between Daddy and daughter. 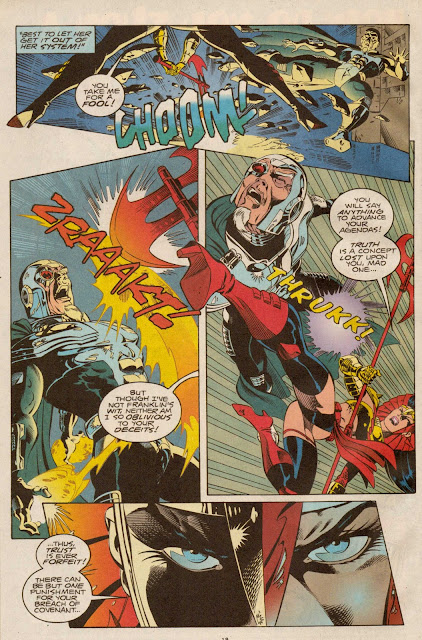 So the two of them have this little “Electra Syndrome” moment which Bastianoni uses as an extremely creepy and inappropriate time to give his audience a Huntara “beaver shot” (stay classy, Bastianoni).

Huntara takes down her dad, but before she can complete the final step in the patricide polka, Psi-Lord stops her and gives Grandpa a chance to explain himself.

Gramps goes into this story about the Fantastic Four fighting a rogue Watcher and a menace of a “Cosmic Scope,” and, how, without the help of the Fantastic Force, they will not survive. Psi-Lord has buy-in. 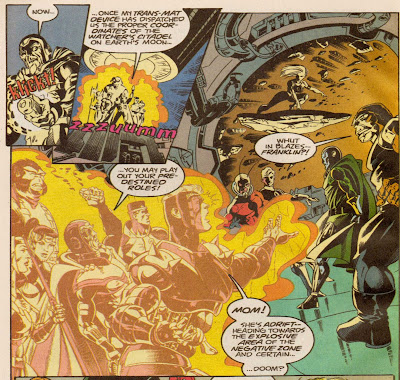 Thank goodness for the Trans-mat device and its ability to dispatch proper coordinates. Could you imagine what the plot would be like without it?

Wait... is that Ant-Man in the panel above? Was Ant-Man part of the Fantastic Four at one point? Man, those guys will take anyone.

Oh yea, and there is Dr. Doom with everyone. But it's not Dr. Doom. It's Kristoff Vernard “Rightful heir to the Throne of Latveria,” who just happens to dress exactly like Dr. Doom.

Oh, the 90's decade, you did such wonderful things with comic book continuity. Thank you for alienating millions of new readers.

Nobody can figure out how to save Susan Richards from the “Explosive Area of the Negative Zone” (which, thankfully, they now make a bismosal for). Nobody, that is, except for “A Warrior of Elsewhen.”
Huntara uses her scythe because, with it, “the whole of time and space is but a pond, to be skipped cross at will!”

Huntara and Susan Richards apparently have some “sister-in-law issues.” Can you imagine Thanksgiving at the Richards' house? Talk about tension!

Still, Huntara saves Susan with the aid of some serious sound effects.

I would like to take a moment to announce that from this image alone, fellow Comics Bulletin contributor Kyle Garret (@Kylegarret) was able to identify that this was from a Fantastic Force comic. That's pretty amazing. Kyle obviously needs to get out more. He wins the first ever Cheap Thrills Social Media Experiment Contest. Congratulations, Kyle.


Back in the comic, the Four and the Force, both of whom are Fantastic, decide that the only way to defeat whatever major completely ill-defined universe threatening thing they are battling is to voyage into the Cosmic Rift. The only way to do so is to access “The Watcher's Trans-spacial Deliverance System” which leads to this: 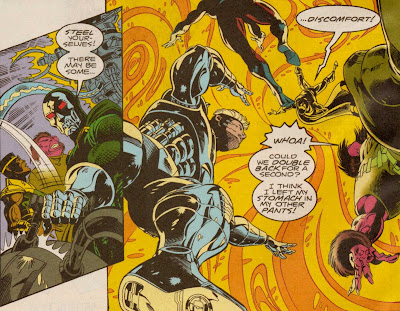 He left his stomach in his other pants?

“Passing through the event-horizon” gives them access to the final two-page splash. 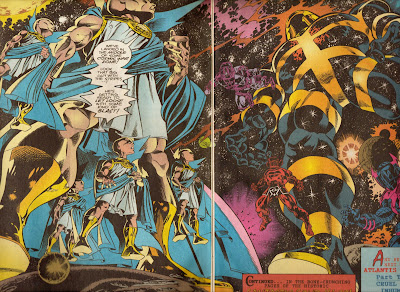 Leaving us hanging from the proverbial “cliff,” as it were.

My prediction: Ant-Man will put everything right.

So what can I say about Fantastic Force #7 to intellectually justify my having spent all this time writing about it? Is there some larger theme about the nature of the universe, the dysfunction of families, the self-doubt inherent in heroism, or the classic dualism between appearance and reality that I can pluck from the top of this garbage heap?

Maybe there is something there, but it will take a better man than I to over-intellectualize it.

For me, Fantastic Force #7 is just another example of how the quest for profit destroys the intentions of art. The concept behind this title only ensured its craptitude.

And writer Tom Brevoort was well aware of this. According to the internet, there is a blog post out there that Brevoort did some time ago about his stint on Fantastic Force. The title of the post is, “Still Bad After All These Years.” Unfortunately I can't find it, otherwise I would be linking it here. If anyone else can find it, please send me the link.

The title of the post, though, says a lot.

This comic originally retailed at $1.75. I paid fifty cents for it. While I certainly saved some money, I still feel entirely ripped off.

Sometimes the reason a comic ends up in the Bargain Bin is because it is just plain crap.