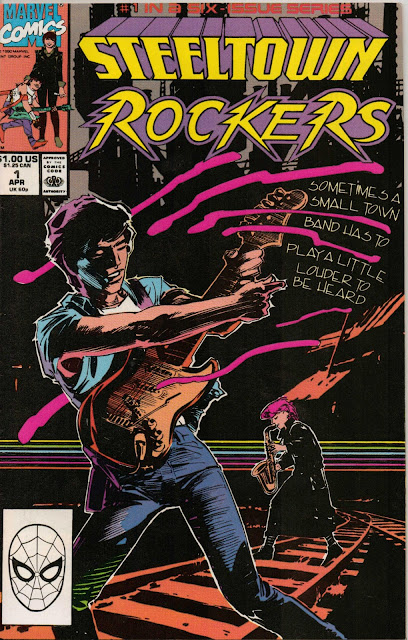 I was just starting to have some respect for you.
It’s April, 1990 and from the TV comes the face of some strangely alluring bald woman pleading with America that “Nothing Compares 2 U”, while folks everywhere shell out their hard earned cash to see “Ernest Goes to Jail” on the big screen. The Hubble space telescope is launched, Emma Watson (Hermione from the Harry Potter movies) is born, and Jim Pencak bests Purvis Granger to win a Pro Bowling tournament and pockets $28,000 in the process.

It is four months before Sadaam Hussien invades Kuwait and suddenly there on the comic racks, capturing this zeitgeist, is the first issue of Marvel Comics’ six issue mini-series, Steeltown Rockers.

Apparently in 1990, Marvel Comics decided that their reading audience needed a break from its superhero offerings and offered a gritty real-life drama about young men and women trapped in an economically depressed small town trying to break free from its confines through the power of rock and roll. Editor in Chief Tom DeFalco tapped the talents of Emmy nominated actress (for her 1980 role on NBC’s “The Doctors”) Elaine Lee to script a story about Johnny Degaestano’s dysfunctional life and rock star dreams, and Eisner Award winning (for his inking of Mark Buckingham’s art in Fables) Steve Leialoha to channel the hybrid love-child of Frank Miller and Archie Comics and pencil this tale.

The result was Steeltown Rockers.

Right from the beginning of this book, you know you are in trouble. Take a look at the cover. Under the masthead, in-between these thick fuchsia squiggles (is fuchsia really the color of gritty small town rock?) it reads “Sometimes a small town band has to play a little louder to be heard”.

When I first read this, I felt that I wanted it to be a profound statement. The more I thought about it, though, the more of a cheap, platitudinous cliché I realized it was. This realization set a tone for the rest of my reading of this comic.

The book opens up with a muddied colored splash page of a young man playing guitar on stage before a hoard of green tinted adoring female fans. He is being introduced by some offstage voice as “the GREATEST rock-n-roller of ALL time, the fanTABulous JOHNNY D.”

Believe me, the writing continues in this vein through the rest of the book.

It turns out this opening page is just the daydreams of young Johnny Degaestano. He is brought out of his reverie by the reality of his dysfunctional family. His mother smacks him across the face after a brief conversation about her scissors and Johnny’s incessant obsession with his guitar, telling him “Don’t be smart.” (to which he responds, “Not much chance of that” – ooooh – gritty character development). His father is introduced sitting zombified in front of a montage of clicking through TV channels, settling on “Gilligan’s Island” and further into his Barcalounger amidst empty beer cans (Gritty!). Johnny’s sister then informs him that her baby (oooh – teenage pregnancy – how gritty) needs braces for his feet “so they don’t turn out and make him walk like a duck” (Gritty!) and there’s no money to pay the mortgage. Johnny is apparently the only employed member of his family (Gritty!), and so the burden of the family falls to him. We are also told that George is dead. I think we are supposed to assume that George was an older brother or something (Gritty!).

Johnny reacts to the stresses in his life as only a young man in a gritty drama such as this would, by dreaming of escape. As soon as he gets the new Stratocaster out of lay-away (Gritty!), he’s off to California, “where the girls are women and the musicians are RICH!”

Just a quick comment about the art in this book. Take a look at Steve Leialoha’s baby renderings in these four panels. 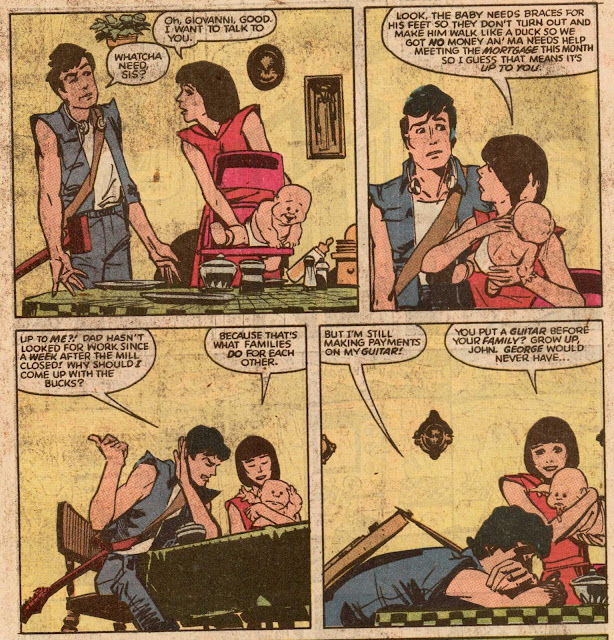 The rest of the book concerns Johnny slowly meeting other rock and roll dreamers in Steeltown and putting together a band – The Steeltown Rockers (of course).

The book’s narrative is pretty straightforward, albeit laden with clichés and mildly moronic writing. From the sign in the music shop that reads “Don’t NOBODY play ‘Stairway to Heaven’ in THIS store” to the African-American character’s calming “He’s black so he MUST be waitin’ to rip me off, right?”, I began to wonder how old Elaine Lee was when she wrote this book and how much experience she had at the time with gritty reality.

While jamming with another guitarist, Johnny reveals that he learns some hit licks from watching a Yngwie Malmsteen video. A quick Wikipedia search tells me that Yngwie Malmsteen is a “technically gifted” Swedish heavy metal guitarist who is considered to be “a pioneer of shred guitar”. And who says comics don’t teach you things.

By the end of issue one, Johnny has had his tape deck stolen out of his car and his bicycle stolen. He’s lost his job as (of course) a Pizza Delivery Boy (Gritty!), and has sold the bus ticket to LA he has kept hidden behind a picture of a couple of guys and a dog (is this a picture of Johnny and the mysterious George?) to get the sweet new Strat off of lay-away. He has also met the guitarist Eddie Johnson (who plays a yellow and black zebra stripped X-shaped beauty and yells “Jimi Lives!” before he shreds) and punk rock sax player Sadie Rae Spivey (“Call me Syd” – Gritty!) who Johnny decides will be part of his band which he christens The Steeltown Rockers.

Upon hearing the name of the band, punk rock sax playing Syd responds “Yuk. And I was starting to have some RESPECT for you.” Really? Why? What had Johnny done up to this point to garner any respect? Fled his familial obligations? Lost his job? Wallowed in self-pity (Gritty!)?

Whatever. To be honest, I lost respect for this comic the moment I bought it. 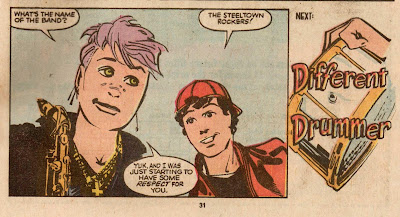 Elaine Lee did go on to write Vamps for Vertigo Press four years later, and she did a much better job there, which is not saying much here. Perhaps she had more experience to draw upon with nympho vampire babes than small town rock and roll dreams. With Steeltown Rockers she seemed very much out of her element and the writing in this book reflects it.

I guess it is nice to see that in the 90’s, Marvel Comics was at least daring enough to take a chance on a non-superhero book and tried to tackle some important issues like the effects of poverty on families, and the good old literary standby, “What happens to a dream deferred?”, but Steeltown Rockers just doesn’t click. It is hackneyed, cliché ridden pap at best and pretty much not worth the two-bits I paid for it.

On a side note -- much to my surprise, in the course of my research on the book I found that Steeltown Rockers apparently has a bit of a following. It even has a Facebook page. So maybe I’m just the one out of touch. Maybe I need more small town poverty experience (Gritty!) to really appreciate Steeltown Rockers. Maybe I need to listen to more early Springsteen and Yngwie Malmsteen. Maybe I need to stop being a snob and understand the inherent beauty and gritty reality of this comic. Or maybe liking a book like Steeltown Rockers is just ironic enough now that it has been co-opted into the new hipster cool. Once again, whatever…. I am not looking to read issue number two.