In these economic times, finding inexpensive entertainment is difficult. Thank goodness for my local comic shop and a slew of comics nobody cares about anymore! Each week I randomly grab a comic from the bargain bin (for 50 cents) to see what kind of bang I can get for my two-bits. These are those tales (also available at Pop Culture Zoo). 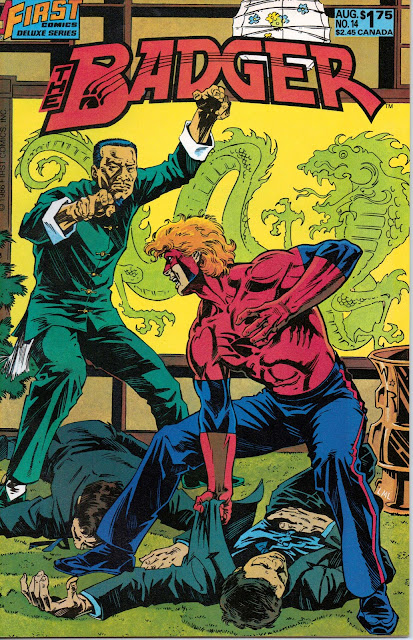 It’s August of 1986 and proto-fanboys around the country are quoting Ripley from Aliens (“Get away from her, you BITCH!”); mom and dad and doing the white man’s overbite dance to Paul Simon’s “Graceland”; Bon Jovi is, indeed, “Slippery When Wet”; William Schroeder, the second artificial heart recipient, dies after 620 days; and really ugly sweaters are still the rage on “The Cosby Show”. As the summer of ‘86 draws to an end, I’m a sophomore in college and First Comics releases “The Badger #14” (these two things are in no way related, I promise).

First off, let me own up to the fact that this comic really threw me for a loop upon my initial reading of it. Being issue number 14, there was a lot of back story missing, such as: who are these people, why are they doing what they are doing, and especially, what the heck is going on? I had to do some research before writing this column.

The Badger was a weird series, a black comedy that tackled some serious issues in its time. Its publisher, Illinois based First Comics, was in operation from 1983 to 1991 and produced a number of creator-owned titles including Howard Chaykin’s American Flagg!, Jim Starlin’s Dreadstar, and Mike Baron’s The Badger. At the time, Baron, along with artist Steve Rude, was riding high on the accolades from his series Nexus (the series eventually garnered six Eisner Awards), when he started writing The Badger.

Set mostly in Madison, Wisconsin, The Badger follows the adventures of Norbert Sykes, a Nam veteran who apparently had multiple personality disorder, The Badger being one of his more distinct personalities. Apparently, The Badger could talk to animals and had some sort of unexplained random empathetic connection to their sufferings. The Badger was also a martial arts expert and certifiably bat-shit insane.

Issue 14 is a self-contained story titled “Snake Bile Cognac”. It finds The Badger trying to avenge the death of a cobra who has been killed by Chef Herbert Ng on an episode of “Fabulous Foods” (hosted by Melanie Monk – I’m not making this up). Ng is on the show to demonstrate how he makes his famous Snake Bile Cognac (I’m not making this up) which he serves in his San Francisco restaurant, The South China Sea. This drink is made from a mixture of cognac and the bile sac of a cobra (I’m not making this up). The Badger is watching the episode when he sees Ng kill the cobra. He then reacts violently to this and packs his bags for San Francisco to get “Revenge for a snake.” There you go. This is the plot of this comic. A superhero wants to kick the crap out of a chef for killing a snake. I am not making this up.

A quick story synopsis now: The Badger arrives at Ng’s restaurant, has two pages of martial arts combat with Ng’s nephews (why does this remind me of a Bruce Lee movie), goes on a three day backpacking trip in the Sierras with Ng, saves Ng from falling off a steep rock face, loses a four page martial arts battle with Ng, drinks a cup of Snake Bile Cognac, hallucinates, eats a multi-course meal cooked by Ng, and then gets into a cab driven by Travis Bickle from the movie “Taxi Driver” (he even says, “You talkin’ to me”). That’s it. That’s the story line for The Badger #14. I am not making this up.

The plot and storyline aside, this is a seriously weird comic and The Badger is a seriously weird dude. Apparently, The Badger is a “legend in Martial Arts” who shouts “Uf-Da!” while performing his moves. For those of you who have never spent any time in the Upper Midwest, “Uf-Da” is a common expression used there as a catch-all interjection to express feeling of being overwhelmed. I lived in Minnesota for six years or so and heard people saying it all the time. Never, though, when they were kicking someone’s ass.

Next, remember that The Badger has arrived to beat up Chef Ng for killing a snake. Instead, they take a backpacking trip together. I have no idea why this happens. And if this wasn’t weird enough, during the trip, as they are crossing a log over a ravine, we get this scene: 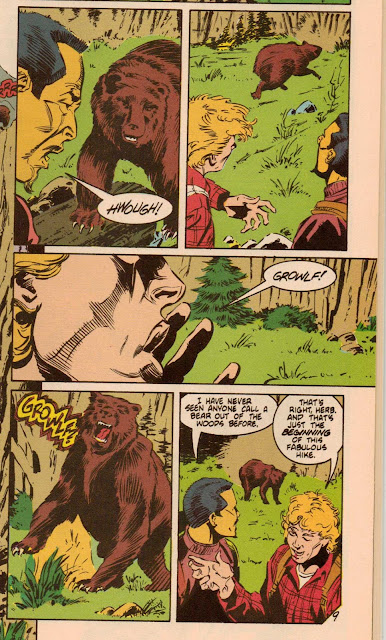 That’s right, The Badger calls the bear back out of the woods. I guess to demonstrate to Ng that he can???? But then that’s it – the bear is never mentioned again.

But the best part of The Badger #14 has to be, hands down, the scene that occurs after The Badger drinks a cup of Snake Bile Cognac. After pounding down the drink, The Badger goes into a two page, black-background, unexplained, weird-ass hallucinatory reverie, culminating in his getting punched in the face by John Wayne. 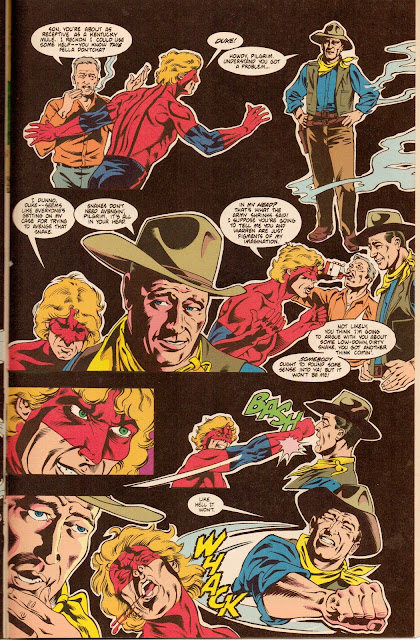 That’s right. Punched in the face by John Wayne. Uf-Da! Chef Ng offers him some water, to which The Badger responds, “The Duke hits harder than anyone.” This is never explained either, and is never mentioned again. Seriously, I am not making this up.

All in all, though, as weird as The Badger #14 is – and it’s weird – I found myself enjoying the read. Sure it was confusing, sure it was random, but for fifty cents it was entertaining and was certainly a nice little distraction from the daily grind. I don’t know if I would spend more to catch up on the further adventures of The Badger (in 2007, IDW Publishing released trades of the old series), but I would certainly hand my copy of issue #14 to a friend, especially one who was down in the dumps. Of course, I would hand it to them by saying, “Uf-Da!"