Comics As Dance, Comics As Place: Rob Clough on THE BACKSTAGE OF A DISHWASHING WEBSHOW by Keren Katz 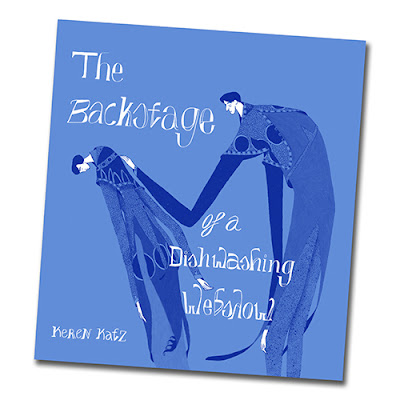 Keren Katz's new book, The Backstage Of A Dishwashing Webshow, has a linear narrative that is advanced by the images the text interacts with. However, that plot (along with its characters) shifts, bends, and loops around much like her drawings do. The Backstage Of A Dishwashing Webshow opens with an extended prologue about an opera house. Every show for their season was set up in stages that were right next to each other, and each show practiced simultaneously. In order for the actors to get to their show, they went through a vast, backstage area, going through the backdrops of other shows. The actors had to take care not to have the words or images of other shows seep into their thoughts. This prologue is otherwise unconnected to the action elsewhere in the book, but it is integral to understanding Katz's project here.

This is a story that is both narrative and meta-narrative. It's like reading Tom Stoppard's play Rosenkrantz and Guildenstern Are Dead without having Hamlet to refer to and understand as its source material. It's about the times and spaces behind and in-between; indeed, it's about giving up on the narrative of one's own life in order to devote it to the machinery of someone else's narrative. It's life as a perpetual backstage scene. To this end, Katz eschews conventional comics page structure. There are neither panel grids nor word balloons. By doing so, Katz creates an interesting tension between static image and sequentiality that's at play throughout the book 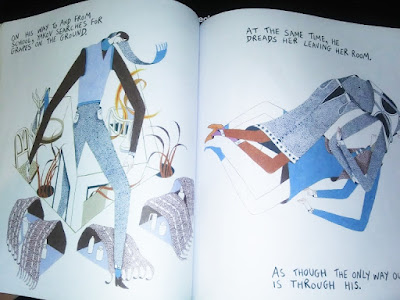 The images themselves are flattened and twisted around themselves. The characters are always at odd angles, contorted into strange positions that highlight distorted anatomy. Unlike artists like Chris Ware who describe comics being like music in the sense that there are rhythms to it; there's a sense of flow, it's all there, waiting on the page for a reader to bring it to life as though it were sheet music, for Katz, comics are more like dance, and modern dance in particular. This involves the kind of deliberate distortion and flattening of form on stage to create forms that resemble abstract shapes more than they do people. Motion is essential to dance, yet modern dance paradoxically looks to create this flattening of time and space where individual poses are as important as the movements themselves. Typically, comics is a static medium that looks to create ways to depict motion and sequentiality. What Katz accomplishes is quite a trick: simultaneously creating powerfully abstract and static images in a way that reminds the reader of their sequentiality and the illusion of motion.

As well, Katz's use of color adds to this tension. Katz's line is thin and delicate, but her use of color is in-your-face on almost every page. It is also entirely decorative and expressive, serving to add weight and beauty to each image.

The main character of The Backstage Of A Dishwashing Webshow, Rivi, works as an air traffic controller for a time and writes to her long-distance boyfriend, Yakov. She's sent to Mount Scopus, a "school specializing in transmutation," after she was fired from her job for "lack of focus." Transmutation implies transformation, but it goes further than that: the school actively inhibits any kind of certainty of self, especially with regard to temporal focus. Moments of time and interactions, in general, are flattened and abstracted by the strange architecture of the school. How long an activity takes is solely determined by the size and shape of the room of its occurrence. 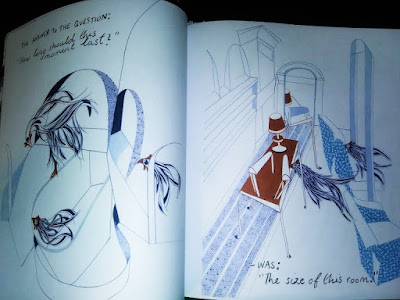 Understandably, Rivi and the other students are constantly unmoored. It's why Rivi quickly becomes a sort of shadow to her roommate's webshow, wherein she films herself doing dishes. The students crave the tiniest of gestures and objects as a way to root themselves against the school's relentlessly shifting qualities, and the webshow provides just that sort of structure. Like everything else in the book, however, it is a performance. Its consequences are fictional, as her roommate thinks of the dishes as props, not as actual dishes. This ties back into the prologue because nothing is real. Everything is a prop.

Indeed, the rest of the book recapitulates the prologue, with one notable exception. Backstage, the actors "keep their eyes down, as not to be seduced by the wrong settings for the wrong words."  Seduction is a recurring theme here, especially of the inadvertent kind. Rivi seduces her long-distance boyfriend Yakov with her descriptions of violence. Rivi's roommate seduces their neighbor (also named Yakov) with her webshow. They all wind up in this play of life with not only the wrong words, but they also do not even know who they are playing anymore. Indeed, the problem is that many of them don’t even have a part to play.

The strangest thing about Keren Katz's strange comics is that they all seem to be based on true-life experiences. She really did have a friend who had a webshow wherein she would wash dishes. Katz did serve two years in the Israeli military, and the accounts of her character working in an air traffic control tower no doubt come from her actual doings. It's clear that the "transmutation academy" discussed in the book is based in part on the Center For Cartoon Studies as much as it is Harry Potter, as Katz just finished up a fellowship at CCS. These experiences are all unusual on their own, but Katz's fundamental approach to storytelling is so singular that these details and anecdotes are secondary to her overpowering visual aesthetic.

Throughout The Backstage Of A Dishwashing Webshow, there are running visual motifs, like chickens as props. They express action and emotion but have nothing to do with the actual narrative. It's a repeating motif that's the absurd essence of this fundamentally absurd book. Meaning not only constantly shifts, but it's also possible that meaning itself is a trick. It's a prop, it's a script, it's the behind-the-scenes footage of the illusion. It's a desperate attempt to create meaning through movement and repetition, to flatten form and form a map of what's possible to understand about the world. Even as identities shift and change and people disappear, the goal is to keep dancing. In the end, Katz, through The Backstage Of A Dishwashing Webshow, tells us that we must keep our heads down and keep moving in the face of these metaphysically shifting sands in order to create our own patterns in the world.