Cities As Symbols: Philippe LeBlanc on STRUCTURES from Uncivilized Books

(Editor's Note: I've been following Philippe LeBlanc's writing over at The Beat for quite some time now, and I've always been impressed with his ability to write reviews about small press comics that come from a clear critical eye and a certain fearlessness in taking on difficult work. When Philippe said he'd like to write about the Structures series from Uncivilized Books for this site, I gave him carte blanche, as I knew he'd write something spectacular. As you can read below, I wasn't wrong.) 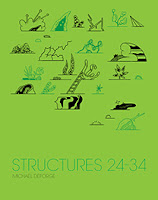 The first illustration comes next to the ominous words Cyclopean outpost. We see minuscule human shapes walking towards a massive metropolis, humongous in size. The figures are featureless, they barely register. How can a person matter when facing such an enormous city? We are minuscule, meaningless. These first pages marks the start of a multiyear, multi-artist project called Structures published via Uncivilized Books.

I remember meeting Tom Kazcynski, the publisher of Uncivilized books and cartoonist, at TCAF in 2014 and talking about the Structures project was going to materialize and now, four years later, I am reading Structures 1-11, the building block of this series.The book takes place in an immaterial void reflecting only a sliver of reality and not bound to a specific time of publishing. It is timeless. It’s about the structures we built and how we see them once they’re built. They become symbols.

I remember visiting Toronto for the first time and how being in the city felt. I’m from Quebec City, a much smaller city in comparison to Toronto’s enormous size. It was massive, tall and expanding into infinity. I remember the overwhelming feeling of invisibility, of worthlessness amongst a sea of human beings walking through the core of downtown in the winter, surrounded by towers hovering so far above me, I could barely register where they ended. I had been to major cities before, Montreal or New York are close relatives after all, but Toronto was something else. Perhaps it was this heterogeneous architecture, one that seems empty of planning or logic, skyscrapers surrounding townhouses, a lake with very little waterfront access on the ground (at least downtown directly), and other varied odd bits of patchwork creating the city. I remember when I first saw Denis Villeneuve’s film Enemy, it captured similar feelings as he depicted Toronto as a cage, a massive city with streetcars electrical grids constantly overhead, claustrophobia abounds. I wondered how a Metropolis such as this could have expanded this way, and how the modern wonders of architecture felt so dehumanizing and oppressive.

Structures 1-11 stands as the foundation of this exploration of objects, space, and big ideas and it comes in deceptively small packages. It is not interested in depicting reality, but rather, it explores concepts on the outskirt of reality. What do our modern cities look like? What would the end of days look like? What is reality? All of those are contained within this series through abstraction and cryptic notes. The juxtaposition of words on a blank page and drawings on another is an interesting way to explore these concepts and a reminder of how comic books work. Comics are really just words over drawings, but what you can do with that is endless.

Another example of these cryptic explorations of structures as symbol echoes across the two pages depicting The Tomb of Jack Kirby. It's a beautiful reminder of the massive legacy Kirby has left the comic book world. I remember reading about Kirby for the first-time in the pre-internet era of my childhood (in a copy of Wizard #33. I think). I believe it was a sort of a tribute issue, complete with a massive array of praise from a number of comics artists, editors, etc. Without having even seen his art, I knew how important his legacy was and how much comics owed to him. His creations fuel the big publishers to this day and his concepts are still the object of admiration. Depicting his legacy as a towering edifice of grief and wonder is bold and spot-on. Kaczynski creates a futuristic metropolis just on the edge of reality filled with tall concepts and ideas. Exploring our relationship with our landscapes and urban environment in our modern ages in 11 images is incredible. That four other cartoonists explored similar concepts is remarkable.

The following issues follow in the footsteps cleared by Kaczynski. Each artist tackles big, bold ideas about our modern world, and explores them in their own way. The recurring element of each comic is the structure of the comic itself, a blank page with text followed by a page with an illustration. Vincent Stall’s Structures 12-23 begins with a seeming collapse of civilization, leaving the world in ruins. From these ruins, a new type of architecture rises to impose its grotesque will on nature. We only see the structures built by the survivors as they cannibalized the past, the landscape, and nature itself to create a series of temporary habitats. Stall focuses on the way we accommodate ourselves by repurposing our surroundings.

Michael Deforge pushes these ideas forward in Structures 24-34 by moving away from physical structures and on to ideological ones. Deforge is looking at how nonsensical national myths can be. We take certain things for granted, but what we build as part of our national myth is often arbitrary. Some things are easier to understand, but others seem haphazard. Deforge shows various shapes and forms that are supposed to be items of national significance, whether it’s national ladders or national living rooms, and each image is twisted and unrecognizable. It forces the reader to consider how we build myths and why we take some things for granted when they can be, in fact, just irrational and subjective. Our inspiring stories and symbols are not always self-explanatory, if we’re thinking about some of our Canadian myths and how they take on a significance of national importance, one can understand how Maple syrup or the resilience of the beavers but some other elements are more nebulous than others. Canadian niceness, for example, is one of those that are harder to wrap your head around. Are people nice, or passive-aggressive, and how did this become part of our myths?

In Structures 35-45 Patrick Kyle looks at the twisted structures of our mind. Kyle creates a world where everything is twisted into abstraction. It’s almost like navigating a dream, or a nightmare. You can almost recognize the structures he’s depicting, they are just twisted enough that you see the foundation of a table, or a chair, but the rest is barely decipherable. The text doesn’t talk about a structure, but of a construct of the mind, just bizarre enough to feel familiar, but strange enough to be horrific. My favourite example might be “Several people holding hands in a circle in a park somewhere in a neighbourhood in the city you live in but not in the neighbourhood you live in”. Kyle builds a nightmare for us to consider. How does our mind organize information and what happens if those structures are twisted? Kyle forces us to consider that, much like the construction of myths, habitats and cities, our psyche may not be as structured as we think.

Structures is a series that has been exploring interesting topics throughout its short publication history. From the creation of modern society, to how we destroy nature for our own purpose, to how we construct myths and how our mind behaves, Structures show that comics can achieve thoughtful explorations of philosophical topics and existential questions even in small formats. The medium is made better by work like these, each piece builds onto the previous one to create something bigger than the sum of its part. Uncivilized Books can be very proud to publish such a strong and experimental comic series. 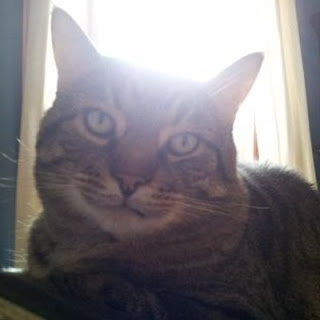 Philippe Leblanc is a Canadian comics journalist. In his regular life, he improve Canadian medical education, and is the co-host of the Ottawa Comic Book Club. He reads alternative, indie, and art comics at night and writes about them for The Comics Beat and Your Chicken Enemy