This week's Tiny Pages Made of Ashes for Comics Bulletin 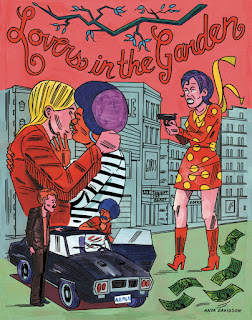 There’s a profound sense of longing at the heart of Anya Davidson’s Lovers in the Garden, one that’s coupled with an endearing self-defeating optimism. Characters find themselves stuck in a nebulous state of existence, either pining for that next, higher plateau, or aspiring to break free of their circumstance altogether. Utilizing a tandem narrative, Davidson is able to explore the perspectives and desires of multiple protagonists that culminate in a shared climax that tacitly examines both kismet and tragedy.

It’s this structure, this multi-faceted reflection of the same longing to either climb the ladder or jump off the ladder, which prevented me from ever putting the book down. Lovers in the Garden feels like a sort of rotating peep show into the vulnerabilities of its cast, and the sense of voyeurism is addictive. While reading, I was less interested in seeing how its disparate parts would form a whole than I was in continuing each individual perspective to their natural conclusions, and yet Davidson supplies both with ease. It’s intimate and honest, yes, but it’s surprisingly light in tone. It’s…funny. Or at least, it’s funny in that awkward way of seeing reflections of yourself so clearly presented in fictional characters for you to both laugh and cringe at. There’s an irreverent tone in Davidson’s work, a bluntness to the relevant and familiar truths as we chuckle at the comically poor choices made by Shephard and as we empathize with the devastatingly poor choices made by Elyse.

The 1975 New York City setting is indispensable to informing the motivations of the myriad cast. I was born nine years after this specific era, but growing up a New Yorker you become aware of a shared history that lingers in its denizens and in its streets. That time is still visible despite the temporal distance, and Davidson’s combination of markers and colored pencils, reinforce that 70’s grit and psychedelia to a tee, while also mirroring the narrative structure in how they blend in and out of each other. It was an era of rising expectations where women, including women of color, could see advancement in the workplace as something actually achievable against the backdrop of cultural revolution and the end of a deeply unpopular war. 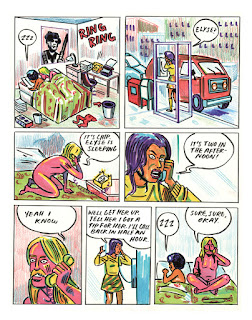 We have a trio of women each motivated to move upwards: Rosa to earn a promotion, Elyse to nail the big break, and Mystic Blue to screw over her boss. With the male characters - who delightfully turn out to be the titular lovers (not romantically, but equally intimate as brothers in arms) - we have Flashback and Shephard looking to escape the gradually boiling pot in which they’re trapped. For Flashback that means returning to the freedom of who he was before the war forever changed him, to be the free loving roadie that saw only possibilities ahead. For Shephard, well, it’s the microcosm desire that every character here has: to be able to control one’s own destiny and define one’s own identity.

Through it all, Lovers in the Garden takes these longings and doles out various perspectives on the means and motivations to achieve them. Davidson constantly pushes the edges of her characters’ lives inward, so that the question of what is tangential and what is significant becomes hazier. What are the big moments in our lives that shape the future? Are they as mundane as changing your usual lunch order? Are they about realizing how ephemeral the relationships we thought we needed truly are?  It’s like the fortune in the cookie we all laugh at for its ambiguity at the table, but then gets secretly put in your wallet with the hopes that perhaps there’s some great wisdom, some truth in fate, that will sneak its way into your life. Lovers in the Garden tells you that it’s not likely, but there’s just as much harm in hoping as there is not. 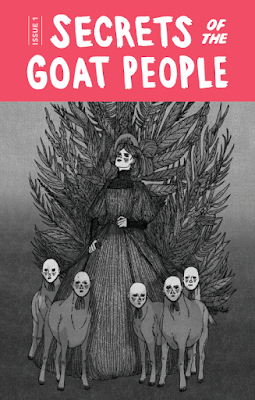 What does it mean to “have a voice”? The idea of “voice” is different than the idea of “ words”. We understand the power words can have, but when powerful words are used by the voiceless, they often go unheard. To have a voice means to have influence and the ability to exert it  —  to not just be heard, but to be listened to.

When those in power take away someone’s voice, that person becomes discounted. When the marginalized find their voice once more, the powerful try to silence them, spewing madness like, “Don’t raise your voice to me!”

Is “voice” then the sound of confidence?

I ask all this because I recently got a review copy of the new literary zine from Bleating Hearts Press, Secrets of the Goat People #1. Bleating Hearts Press is the publishing arm of Women Write About Comics, one of the great comics criticism sites on the web right now. Stretching out into the world of publishing is a way of bringing further awareness of the many amazing critical and creative perspectives that have found a home at WWAC and to amplify their reach.

As WWAC and Bleating Hearts Press Editor in Chief Megan Purdy writes in her introduction to Secrets of the Goat People #1, “For the first issue of our first print project ... we decided to go back to the start, to state firmly, again, that we’re here. That’s why the theme we’ve chosen for Goat People #1 is simply: voice.”

This inaugural issue is a declaration, a shot across the bow, a statement of purpose that is saying, in effect, “This is Us.” The 40 plus pages of original comics, illustrations, and prose from 17 international creators that make up this zine all point to giving power to intent, to demonstrate that here are individuals that have something to say, that here are voices that will be heard.

Sometimes the voices here are loud or messy or painfully young in development, but each is earnest, each speaks a truth, each deserves to be heard. Whether it’s the beautiful artwork of Zed Alexandra in “L A G”, the profound exploration of “My Russian Voice” by Masha Zhdanova, or innovative prose of Coral Moore’s “Most AIs are Jerks”, there is a breadth of expression here, a cornucopia of voices.

Secrets of the Goat People #1 is mostly about opportunity and amplification. It’s not perfect and some of the pieces it contains seem amateurish and awkward. But what Bleating Hearts Press is doing is providing a platform for voices that may otherwise have no other venue.

And sometimes when you amplify voices that have been quiet for so long, they come out seemingly too loud at first, maybe too rough around the edges, unrefined, immature, sloppy, or “unprofessional”. This happens a few times in this first issue of Secrets of the Goat People. Some of the pieces suffer from the poor execution of a powerful idea. Some of the pieces falter just as they start becoming something more. A couple of the pieces simply are just not good, really. But each piece creates a spectrum; what works well helps point to the possibilities of what doesn’t, what doesn’t, in turn, adds strength to what does in comparison.

Secrets of the Goat People #1 all adds up to something important: an assertion that this is a zine that will have power, will have something to say, will be worth listening to, and will not be silenced.

It only stands to reason that the theme of issue #2 is “Resistance” -- they are accepting submissions until March 31st.