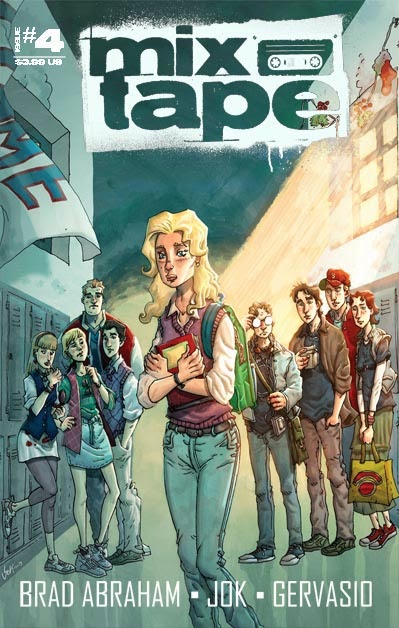 Daniel and Jason have been reviewing all four issues thus far of Brad Abraham's comic Mixtape, which revives all kinds of memories of music and passion, growth and nostalgia. This time they look atMixtape #4. For previous tracks on this album, look here, here and here.
Jason Sacks: Okay, Mixtape #4 is the story of Siobhan King...
Daniel Elkin: Yea, we're back in late 1990, back in Garrison Creek.
Brad Abraham gathers the gang in Mixtape #4, thus pulling together all the disparate threads of the series so far. But Siobhan is the focus; Siobhan having returned from Europe a changed girl has to figure out how she fits into her old life and if she even can.
Sacks: Or if she even wants to... the girls who seemed like cool and interesting real friends end up being cold, nasty, backbiting bitches.
Elkin: Gossip girls -- how nasty they can be, full of rumor and innuendo:
"Pulling a train for drinks from College Guys" -- that's some serious slander.

Siobhan has gained self-awareness – that as things have remained in stasis back home, she has transformed.
Sacks: She's grown and they've stayed the same. That's the magic of getting out of town and having new experiences.
Elkin: And the first step to her finding her new self is not only gathering among other independent souls (geeks and losers and outcasts), but also finding the soundtrack to her new life.
Sacks: Her own soundtrack for her own life - so true


Elkin: And how awesome is it that the soundtrack is Jesus and the Mary Chain's Darklands?
I love it when she listens to the album a few times and then Brad Abraham writes, "But I listened.... And then I heard it."  That is the experience I love and can relate to so strongly in this series, actually hearing the music talk to you -- on a profoundly personal level.
And Jesus and the Mary Chain -- I heard them too. 1987 Darklands is a great album.
"Happy When It Rains"?
Awesome.
And that final image of Siobhan, decked out in her Automatic T-shirt, giving the girls the finger? Perfect.

This series has been so much about the moments of change in the lives of young people. Issue #4 continues this theme masterfully. It captures that liminal space and the emotional torment one experiences wandering through it. And then it provides the perfect soundtrack to match the experience. Well... our experience.
My son is in the midst of this moment now. I know because he's started to listening to music with this new intensity. He's trying to define himself through the rhythms he is hearing, the lyrics he is absorbing… The sensibilities of the bands he admires. It's great to see.
Sacks: That's what's made Mixtape so special for both of us - like we both were when we were this age - in this time period - music hit us in the most primal, visceral, personal ways that were as much a reflection of our age at the time as anything.
Elkin: I'm amazed at how well Brad Abraham has been able to capture the zeitgeist of the time. And having Marco Gervasio and Jok take the art duties fits this whole thing perfectly.
God, “April Skies” is such an awesome song too.

Sacks: I'm a Psychocandy guy. I love the sound of pop music hidden behind all that Metal Machine Music wall of feedback. It's so beautifully painful.
Elkin: Oh, I totally agree with you. I think I linked this last time, but I am a shameless pimp, so I'll do it again.
As you live in the Seattle area, how did you react to Siobhan's sister's decision to move to Seattle to find her new self? Did it ring any bells for you?
Sacks: Of course! It always makes me laugh and smile when I read stories about my town.
She moved out here right at the beginning of The Movement, when this city was briefly the coolest place in the world.
Elkin: What is the coolest place in the world now? And can we move there?
I so want to be cool again.
Assuming, of course, that I was once cool in the first place.
Sacks:  I was only happy when it rained, I think. Apparently Austin is the cool place to live, or at least that's what my cool friends have been saying when I've been around – whether that's true or if they would have told me the truth anyway is open to debate…
Elkin: Oh well... I guess we can be cool where ever we go – except home. You can never go home again. You might be able to walk into your childhood house and put on the music that meant so much to you then, but you've got different ears now. You just don't fit the space the song opens for you any longer. You see where it has taken you and you listen to the heartbeat of your past. It's got a great rhythm, you just can't dance to it.

Which, I think, is one of the things that still draws me to Abraham's Mixtape series. Through the magic of reading these comics, I've been able to have that emotion of finding myself once more. It's a vicarious experience, but the understanding that the ability to discover still exists, the exuberance of that understanding, of finding place, it is the cornerstone of my visceral reaction to what Abraham is trying to do with his books.
Sacks: Music has this amazing power to bring us all back to certain times, to resurrect ideas and make us remember who we were at certain times. The death of Lou Reed brought back all kinds of memories of where I was and what I was doing when I heard his music, reminding me of friends that I hadn't thought of in years and of all the things that had happened in the interim – as you say so beautifully, you see where the song has taken you.
I think we agree that a big part of why Mixtape has hit us both so hard is that Brad Abraham and crew are so successful at resurrecting those memories, of bringing back both the bitter and the sweet in all those small moments that are so unimportant at the time and yet so powerful. When we see Siobhan's friends filtered through her eyes, as reflections of the bands that they love rather than as individual people, that's one of those magical memory filters that are somehow both more and less important to us now than they were at the time.
"Every life has a soundtrack," indeed.
Elkin: I think my soundtrack has as much Metal Machine Music as it does Chopin's Prelude in E Minor.
One thing that is amazing to me is that as my memory loses its edge, day-to-day stuff and significant events of the past become more damp and sullied in my head, I can still remember the lyrics to just about every song I ever grokked when I was 17. I can usually figure out what song it is after only two or three notes. Is there a name for that? Music memory?
I think that is a testament to the power of music. I can barely remember what color my first girlfriend's eyes were, but, with very little prompting, I can burst out pretty much every song on
"Up on the Sun" by The Meat Puppets.
This says something, I guess, about me as a man, a human, a follower of the flow of existence.
What that something is, though, totally eludes me.
Still, it is our soundtracks that underscore our understandings of the who we are and what we want in this life. Brad Abraham understands this, I think, and his Mixtape series is an ode to it.
Buy Mixtape here. Tell Brad that Daniel and Jason sent you!