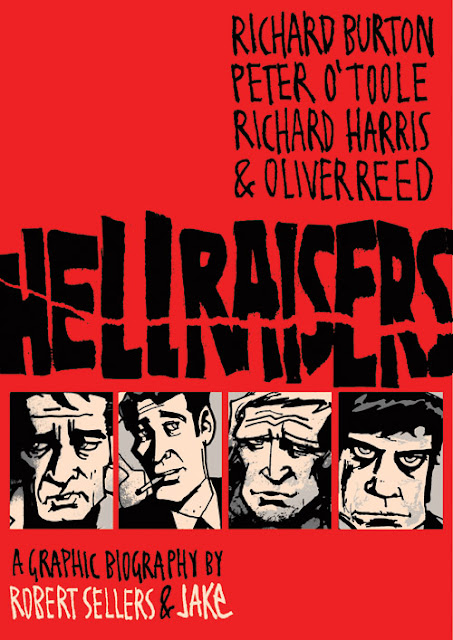 Paul Brian McCoy: For as long as I can remember liking movies, I've always had a fondness for the hard-drinking tough guys. When I was in high school, I had a poster of Humphrey Bogart on my wall and I added my own voice balloon with his famous deathbed quote: "I should never have switched from Scotch to Martinis." The talk show tales of Peter O'Toole, Richard Harris, Richard Burton, and Oliver Reed were historic as far as I was concerned.
So I was very excited to discover that Robert Sellers was adapting his biography of those four madmen, Hellraisers, into a graphic novel -- and even more excited when I discovered that JAKe was doing the artwork. However, for some unknown reason, rather than just stick to the biography format that works so well in prose, Sellers reworks his narrative to incorporate an A Christmas Carol framework that, quite frankly, didn't work at all for me.
The graphic novel tells the tale of drunken reprobate Martin, who on Christmas Eve has just cocked up his family's holiday. Later that night, he's visited by the ghost of his dead alcoholic father to tell him he is going to be visited by four spirits (pun whole-heartedly intended) who will show him the error of his ways. Then the ghosts of Richard Burton, Richard Harris, Oliver Reed and the totally corporeal but still incorporeal Peter O'Toole, all take him on guided tours of their booze-besotted lives.
And even though none of them ever really regret the damages they've done through lives as Hellraisers, Martin somehow learns his lesson and returns home a better man.
What the hell?

Daniel Elkin: What the hell indeed, McCoy.  At which meeting was it decided that the biography of four of the greatest (drunken) actors of our time should be recast as a Dickensian morality tale? I hope to god that there was an epic quantity of booze present so everyone involved can claim blackout status, be contrite about their mistake, and vow never to touch a drop again.
Because it doesn't work, does it? A matter of fact, the conceit comes across as so forced that it detracts completely from the intent of this book. In his introduction, Sellers hopes that this book "serves as a testament to four extraordinary lives lived extraordinarily." As a testament, I'm sorry to say, this book utterly fails.
At what point and in whose mind do four individuals who have no regrets or apologies for their particular brand of hell raising become spokesmen for a more staid existence?
It's enough to make me want to drink.
So where does Hellraisers succeed? Well, first it succeeds by existing at all. As time moves on there is the possibility that generations to come will miss out on the brilliance and savagery demonstrated in the craft of these four men. They stomped large on the screen as on the terra and their performances in each venue were inspiring and educational. Were they to be relegated to the dusty past and forgotten for their contributions, our world would be a little less interesting.
Second, Hellraisers succeeds in, perhaps, giving voice to a generation raised among ruin and the constant threat of death from above. Burton, O'Toole, Harris and Reed all spent some of their formative years avoiding Luftwaffe bombs. There are moments in this book where each man wonders what effect this had on their hell raising ways, and therein sends a message to those of us whose nation is currently dropping bombs on civilians. This could be a good thing if framed in the right way.
Other than these two things, though, I have to wonder why Self-Made Hero even bothered to publish this. All told, I think this book does more of a disservice to the men it purports to lionize than anything else.

Paul: I don't think I'd go so far as to call it a disservice. I just think somebody either had a bad idea and couldn't back down from it, or SelfMadeHero may have had some qualms about telling unrepentant stories of excess and felt obligated to make some sort of moral point in the end. Regardless, it was a horrible idea and someone should have vetoed it somewhere along the way, as you are absolutely correct in saying that it detracts from the intent of the book.
I can even understand the conceit of having a character to whom these stories are told. I can almost even understand the conceit of the Christmas Carol motif. But it's the moralizing that undercuts everything -- and worse, takes pages away that should be devoted to the biographies. We live in times where behavior like those of these actors -- some of them heroes to me -- is not accepted in any way shape or form. The reason they got away with it was, as Burton says, they were the myth makers.
They were larger than life, so their exploits and their tragedies were larger than life, which is something Self-Made Hero could have capitalized on. Because the tales themselves are nicely, even efficiently, told, weaving in and out of history and providing important insights into the men and their motivations. With only minor tweaking, this could have been a great book.
What saves even the twisted moralizing of the story is the art by JAKe. It's overly stylized and at times looks like it was inked with broad-tipped magic markers, and it all works beautifully. There are stylistic elements similar to Kyle Baker's work alongside inspirations seemingly taken from Genndy Tartakovsky. JAKe manages to capture the madness and the method of the Hellraisers without ever losing their likenesses, which is a feat in itself.
I would seriously buy this book for the art alone.

Daniel: And I would buy this book because any mention of Oliver Reed sends me reeling back to 1973 when my parents took the seven-year-old me to the movie theater to see Richard Lester'sThe Three Musketeers. Sure I liked the swordplay and the humor and all that, but what affected me the most was the performance of Oliver Reed as Athos.
I was pretty young, so couldn't figure out why he seemed so different than everyone else in that film (well, except maybe for Faye Dunaway) -- there was an intensity to his performance that was both alluring and unsettling and somehow it stuck in my prepubescent brain as something along the lines of "My God, That's A Man." Nobody sweat like Oliver Reed did on film -- remember Bill Sikes or Frank Hobbs -- the sheen made the man. Reed was almost like an animal, and yet, underneath that growl, I could still sense a purr. Later in life I came to understand that his intensity (as well as his sweat probably) had much to do with his alcoholism, but this never diminished the fact that when somebody asks me, "What is a man?" I always respond with "Oliver Reed."
But I've veered dangerously off topic here, so let me circle back to Hellraisers.  I agree with you, McCoy, that the true charm (if any) of this book lies in the art of JAKe. His take on Reed hits all the P's and Q's for me and, regardless of the messy miasma of the storytelling, JAKe's work rises above. The fervency of his lines throughout most of this book just plain flat out works in capturing the shenanigans and hell raising of the subject matter. I just wish Sellers had risen to the task as well. He should have just left his earlier biography on these men alone.
Perhaps this serves as a cautionary tale. Just because you can write books, doesn't necessarily mean you can write comics.
I'll leave the last word to you, McCoy.
Paul: Ah, yes. The Three Musketeers. That was a childhood favorite of mine, too! Also mostly for Oliver Reed's Athos. There was a visceral lust for life that he brought to the screen that made every role an interesting one, even if the overall film fell short. It was the same with Burton and Harris. The movies might not have been great, but they were. O'Toole's career was brighter -- maybe because he stopped drinking and paid more attention to that side of the business -- and he was always a joy to see on the screen in any role; even just being himself on talk shows.
If this book does nothing else, at least it serves as a reminder of that. In the end, I found I could just ignore the bits in this book that don't make sense and concentrate on the stories of brilliant drunken shenanigans and JAKe's positively glorious black and white art.

Paul Brian McCoy is the writer of Mondo Marvel and a regular contributor to Shot for Shot atComics Bulletin. His first novel, The Unraveling: Damaged Inc. Book One is on sale now forKindle US, Kindle UK, and Nook. You can also purchase his collection of short stories, Coffee, Sex, & Creation at Amazon US and UK. He is unnaturally preoccupied with zombie films, Asian cult cinema, and sci-fi television. He can also be found babbling on Twitter at @PBMcCoy and blogging occasionally at Infernal Desire Machines.