The Great Sabre Interview Part Four: there wasn't another book like Sabre. It was its own thing.

Daniel Elkin for Comics Bulletin: Don, you've mentioned a lot about family and how that's the center of Sabre. I was thinking that it's interesting that you had Sabre and Melissa come together and create a family, yet Melissa had no parents and Sabre's relationship with his family was kind of, well, not what we call wholesome.
Don McGregor: I love that idea. I love the idea because so many people have contentious relationships with their families and often with their parents. I liked the idea of examining that impact for someone who has parents, like Sabre, and contrasting it with Melissa, who has no parents. She has a glass tube for a family and she yearns for the very thing that Sabre has so many conflicting emotions about. Melissa's reactions are equally complex and profound, but I was intrigued with the idea of someone who only had transparent glass to reflect her search for heritage, for love or hate or a combination thereof.
So this allowed me to explore family from two radically separate angles. As we all do, the characters have to try to reconcile themselves to their divergent pasts, but their unity gives them a chance to keep the wounds from crippling them. And we have it facing us. These are questions we will probably really have to confront. It gets closer all the time.
So while I was creating the series, I was looking for things I wanted to write about and thought would resonate on a human level with many of the readers. In this aspect of the series, I wanted to do something where you have a human being who has always yearned for an emotional connection, but she only has this glass tube to go back to. For me there was a poignancy here that lent a great deal of emotional consequence to her character. It also gives strength and purpose to her, too. I love it when she stares at Midnight, when they have a stand-off together, because they each have chosen what is important in their lives, and sometimes that brings them into striking confrontation with each other.

But see, now, here's another thing that affects your books, you're not even aware that are going to affect the books; you guys are talking about whether the medium could handle a series of this sort at the time I was creating it. First, I had no idea it would take over two years before Sabre would become the book that people eventually had a chance to hold in their hands. You're absolutely right Daniel, for better or worse, there wasn't another book like Sabre. It was its own thing.

And anyone I talked with about Sabre in trying to pitch the series, before my momentous phone call with Dean Mullaney about his doing Sabre and creating a company to publish it, brought a lot of insight into what different people who were a part of the comics industry thought of doing such a thing.
One of the first responses I had was (and you would immediately know who this person is, if I said the name) asked me, "Who's going to buy a book about a black guy with a lot of guns? What are you saying, there's a black guy having sex with a white woman? In comics? You're out of your mind!"
That's what the attitude was then. I don't care what these people want to say now in 2013. I know where they were at in 1973 and '74 and '75 and all you have to do is look at the medium and see what was allowed and what's not in the books back then. It doesn't take a genius to figure it out. You realize that even if there's nothing said overtly, you are made to understand that there were topics you weren't supposed to even go near.
And even if you did, you won't get them published.
And Sabre went to all those places. As I said to Dean, "There's no sense in my going out on a limb that no one is sure exists if I can't as a writer explore themes that I want to write about, and examine things that I could not do at Marvel or DC. Otherwise, I might as well stay at the Big Two and stay within the writers' cages."
As the book started to become a reality (and before it got held up and almost never completed), I also had friends outside the industry ask me, "Aren't you afraid somebody's going to steal this before you can get it into print?"
I never feared someone taking the idea, because I knew most people working in the business in 1974, certainly most writers who were in the New York environment, and this wasn't subject matter that they would be disposed toward. Many of them, and they were vocal about it, thought I was crazy to think that comic book stores could support this book, but then on top of it to have characters the companies never would have thought of doing at the time? Well, for many, that all just added up to insanity on Don McGregor's part!
I wasn't trying to do just one thing. I wanted to try many different things, as different as a Sabre could be to a Detectives Inc. to a Ragamuffins.
Even when it came to Sabre, by the time I was starting "The Decadence Indoctrination", I wanted to approach the covers with different sensibilities. This example gets back to the point I was making about the writer being unable to predict many times at what will affect their books. Originally Sabres #10, 11 and 12 were supposed to come out monthly. The fact that we would come out every four weeks made me write the book in a way I'd always wanted to and to experiment with the covers. So, in one, the cover focuses primarily on the romantic nature of Sabre, though, looking at it, probably choosing Marshall Rogers for such a cover wasn't the best choice. Romance wasn't Marshall's strongest suit, but I chose him primarily for the design element, which was one of Marshall's incredible strengths, and since I was splitting between Sabre and Melissa passionately embracing and introducing the top hatted villain, Hieronymous Skull, dancing down an elegant staircase, I thought he would handle the design effectively. 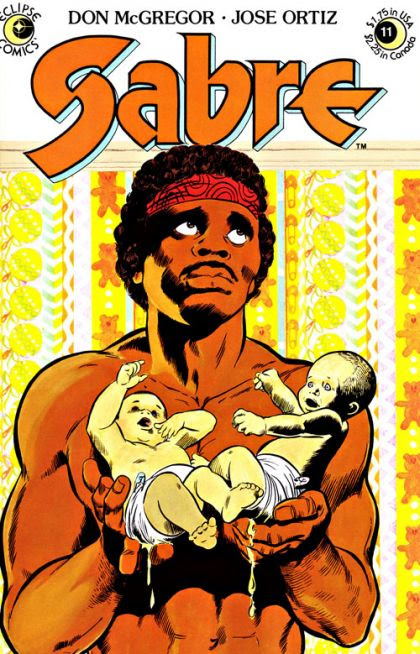 Next, in Sabre #11, I had Gene Colan do a cover with Sabre holding the babies, and they are peeing through their diapers and his eyes a raised to the heavens. Gene caught it dead on. I was playing with the idea that I didn't have to do death and destruction on every cover. Actually, this was a throw-back, in many ways, as far as I was concerned, to the old Superman comic book covers of the 1940s, where, say, Lois Lane is trying to cut Superman's hair and the scissors are breaking. Costumed hero comics had abandoned mostly any sense of humor on covers in the '70s. 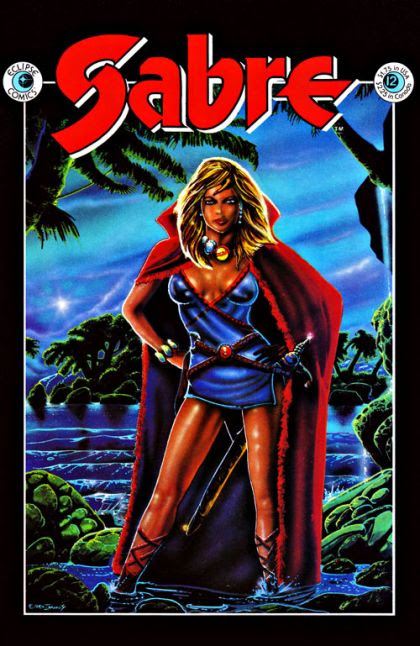 For Sabre #12, I didn't even put Sabre on the cover! I showcased Melissa Siren. I kept working on different looks for her, trying to get one I really liked. And with the book as a monthly, not a bi-monthly, where it is off the stands for 8 weeks, I didn't feel compelled that I had to have Sabre on every cover.
I thought there were things I could try to do, and I always wanted the book to expand from where I had begun. I kept playing with redesigning Melissa's look. Some characters you have nailed as to their iconic nature right out of the gate, others you keep refining, and this seemed an opportune time to work on how she would look after the pregnancy.
I think it was one of the times I was meeting with Jan Mullaney in the recording studio where he was making an album with Frank Carillo that I saw the work of an artist who did these gorgeous looking spray paintings for rock album covers. I'm sure Jan and I must have talked about it, because a meeting was arranged. The artist was someone who liked comics, and I talked to him about the kind of outfit I wanted for Melissa, and the tropical background that I thought he'd be able to do so lushly. I had probably already written into the script to Jose Ortiz on costuming for Melissa, and I know I had the first full pager revealing her new look totally redone. I still wasn't satisified, and if the series had continued, I promise you, there would have been more experimenting along the way.

Anyhow, the cover came out okay. I wasn't thrilled by it. It didn't have that blending texture I'd seen in some of the other paintings. But I never would have done a Sabre-less cover if I'd known that after Sabre #12 we'd be off the stands for something like close to half a year!
Now, you guys could ask, how the hell did that happen?
It is one of those things that I certainly could never foresee. It was directly connected to something that seemed so positive in the beginning, and separate from Sabre. It had nothing to do with Sabre, but essentially, in the end, it ended up killing the series.
Dean Mullaney had sent me a book of artists that Josep Toutaine represented, and that's where I first saw Jose Ortiz' art and chose him to draw "The Decadence Indoctrination." Eclipse made a deal with Toutaine's company to hire Jose Ortiz.
A very nice thing happened and Eclipse sold Toutaine the rights to publish Ragamuffins in Spain.
This meant the series about childhood for adults that was an anomaly in this industry would make some money for me and for Gene. Not a lot, but more than if another country had not picked the series up.