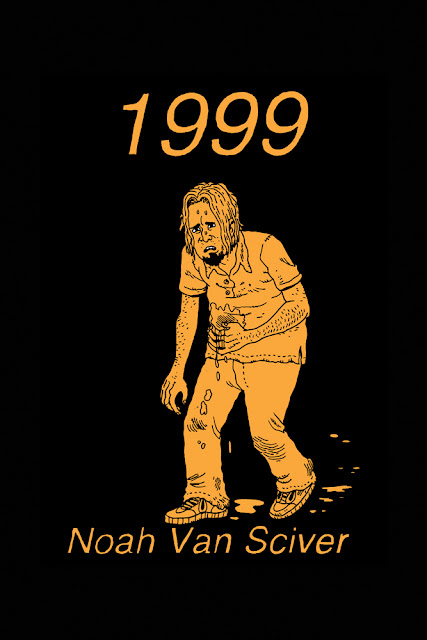 What is a person to do in the face of absolute desperation, when everything in his or her life has turned to shit and the very world in which he or she lives in is on the verge of complete collapse? For Noah Van Sciver, in his new full length story from Retrofit Comics, 1999, the only thing left for that person  to do is to try to reach out, to connect, to love. But what happens when that, too, is doomed?
This bleakness is the background for the story of Mark, the lead character of 1999. As Van Sciver pens him, Mark is the prototypical failure. He has dropped out of school, lives with his emotionally distant mother who is absorbed in her own act of writing the "nextGoosebumps," and has a truly dead-end job at a sandwich shop that is on the verge of closing down. Mark is alone. He has no girlfriend, no plans, no life, and to top it all off, his story takes place at the end of 1999, which, according to the ever present media seen  throughout the book, is the end of the world thanks to impending Y2K crisis.

This is tough stuff.

The desperation throughout 1999 is palpable in both its narrative and its art. Much of Van Sciver's comic book work up until now has been autobiographical in nature, and reading through 1999, I had to wonder how much of this story Van Sciver took from his own life. When I asked him about this, he replied:

"Well, in the recent issues of my comic series Blammo I've been moving away from autobiography and have been doing more fictional stories that are more like 1999. So, yes, I have departed from the blatantly personal  stories. 1999 is all fictional. That stuff hasn't happened to me, but I think I can relate to a the feeling of being lost that Mark is dealing with in the comic. And I've known enough people like him in my life to be able to write that story."

What Van Sciver has done in 1999 is to present a young man confronting what could possibly be the lowest point in his life. Mark's past is filled with regrets, his present is numbingly static and void of connections, and, as the world is going to end in a few weeks thanks to Y2K, his future is impossible. I asked Van Sciver what setting the comic in the midst of the Y2K hysteria added to his themes, to which he replied:

"I wanted it to have some kind of a dark cloud that would hover over the narrative. I think by setting the story against that paranoid kind of panic of Y2K I could give the main character even more of that hopelessness in life. So that it seemed to him that his own personal life was over and maybe even society was over as well. And that's where his obsession with Nora comes from. He has nothing."

Nora is Mark's co-worker at the sandwich shop. She and Mark begin a physical relationship which Mark gets all wrapped up in and, because of this, he begins to imagine a possible future. In the context of this narrative, though, that too is brutally unreachable. Nora is married and has a head full of "fucked up shit that gets (her) off." Van Sciver expertly juxtaposes Nora's rejection of Mark with a scene in the parking lot about a dying bird that hammers his theme home. Mark's self-loathing is then seemingly confirmed as everything collapses for him on New Year's Eve.

This comic is relentless in its examination of the isolation of its main character. When I asked Van Sciver if he thought love is possible, he said succinctly, "I hope so." 1999 does not reflect this optimism.
The theme of an individual's inability to connect makes 1999 a tough, but rewarding read. Van Sciver's art has never been better, full of emotion and experimentation that clearly set the tone he wants for the book. His use of backgrounds and panel layouts are especially evocative for this purpose.
With 1999, Van Sciver also seems to be making a rather bold comment about the act of creating and its limitations as a form of reaching out to others. You'll just have to read the end of the book to understand the nuances of this, though. Needless to say, it echos the rest of the tone of the book.

1999 is another step in the development of Noah Van Sciver as an important independent comic book creator. As part of my conversation with him, we had the following back and forth:

Elkin: What are some of the most difficult things you've encountered trying to market and publish your work and is there any advice you could give to others thinking about or doing the same?

Van Sciver: The hardest part is getting people to pay any attention at all. It's really hard work to get people to read your comics. It takes a lot of stamps and a lot of e-mails. I guess, my advice would be to draw as much as possible. Draw to the point where people think you may be autistic.

Elkin: What have been the greatest rewards you have found in being a comic book creator and do you have any words of wisdom to give to others?

Van Sciver: I've met some of the coolest people in the world through doing comics. That's the most rewarding part. I don't really have any words of wisdom, though, because I'm still a pretty stupid youngish guy.

Van Sciver's self-deprecation aside, in 1999 he is approaching some very mature themes and is confronting them head on, with passion and with skill. 1999 could easily have been filled with cheap angst and teenage ennui in the hands of a lesser artist. Van Sciver is doing something more here.
His next book scheduled for release in a few months will be from Fantagraphics. It is titled The Hypo and is, according to Van Sciver, "a biography of Abraham Lincoln's young depressed life." In typical Van Sciver fashion, he ended his pitch for it with "I hope you like it."
We all have a need for affirmation, for connection, for being part of the world.

1999 can be purchased directly from Retrofit Comics.