Poets You Should Know -- JAY MEEK 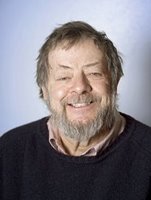 Now you read his poetry to yourself

LEAVING THE ROADSIDE MOTEL
A ventriloquist sat in his car and tried to start it, but it wouldn t turn over. He was in a dreadful fix to be going, and I asked if he needed a jump, but he didn t answer. He just looked straight ahead and ground on the starter. The others talked among themselves, back and forth over the seat, and as they posed their bodies a certain way, or held their heads at a familiar angle, I could tell these were famous people, most of whom were now dead.
The three in back were actors, and the woman beside him an actress who in real life had been beheaded in a car crash. They were each dressed according to the role that had made them famous on the screen. But as they continued to talk lightly about what I couldn t hear with the windows rolled down, I could see these were not the famous ones, but models who in some way resembled the famous. This was how near they had come, and how far they had missed by. As the driver turned the key, sometimes the battery sparked, and everyone lurched forward. When they did, an eyelash dropped from one of the women, or a monocle shattered, and one man in the back seat wept over the aristocratic nose that had come off in his hand.
I used to wonder what the ventriloquist's doll did at night, alone in its box, but I see now that it must have done no more than cherish the silence, a few hours without manipulation. And the ventriloquist, what does he feel, at a loss for words? Everyone is endangered.